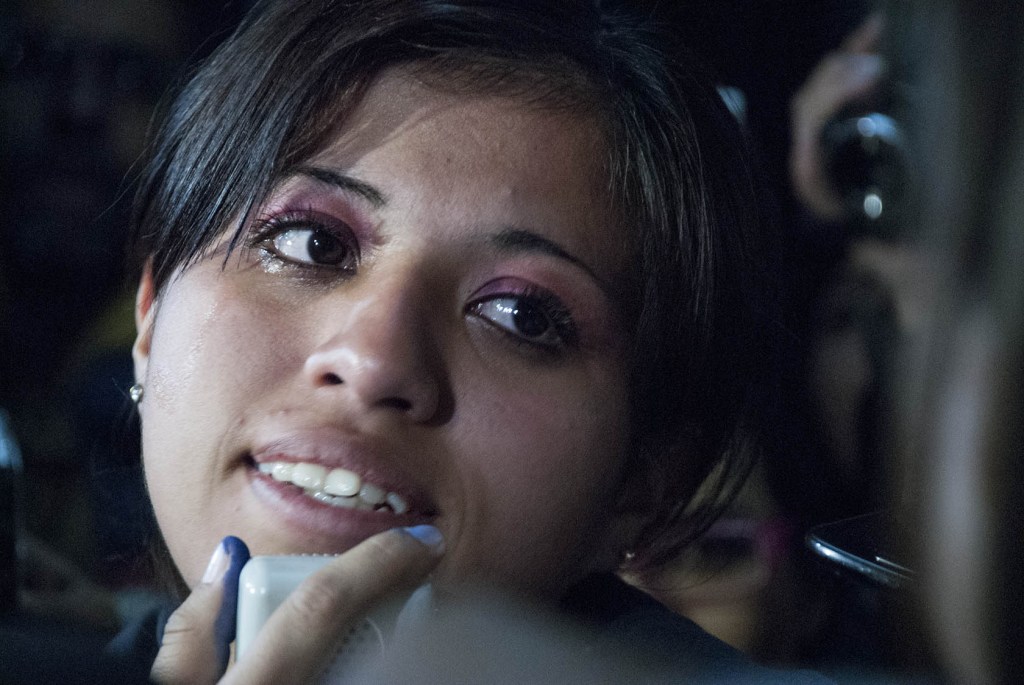 On the eve of International Women’s Day, FSRN takes a look at developments in a Mexico City case which many activists consider emblematic of the deep flaws in the Mexican justice system with regards to victims of gender-based violence. Andalusia Knoll has more from Mexico City.

A large crowd of people, including lawyers, activists, journalists, and even performance artists, gathered in front of a women’s prison in southern Mexico City Wednesday night to welcome the release of Yakiri Rubio. Her case has received so much attention via social media in Mexico that she is known here more by her first name.

Twenty-year-old Yakiri was incarcerated in December for killing Miguel Angel Hernandez Anaya, who she says – along with his brother Luis Omar – kidnapped her, took her to a hotel, then stabbed and raped her. In a moment of struggle, Yakiri turned the knife on Hernandez Anaya, cutting his throat. He died later that same day. When Rubio went to the police to report the rape, she was charged with murder and held without bail. Those charges were reduced this week.

Speaking to the crowd in front of the prison Wednesday night, Yakiri Rubio thanked her family, her lawyer, and the many activists who fought for her release. “I used to believe in the justice system and that the police were going to help me,” said Rubio. “I trusted them and then I realized that the exact opposite happened to me. What I want is an end to the injustice and machismo because machismo was behind the charges against me. I hope that there will not be any more of this, that I will be the last woman who will have to live through a situation like this because it’s really hard and difficult and no one should have to go through this.”

Yakiri’s bail was the equivalent of 32,000 dollars which included reparation of damages to the Hernandez Anaya family. She still faces a rarely used charge of excessive use of force in self-defense.

Yakiri says she fears for her life and the safety of her family and cannot rest until her other assailant is behind bars. Luis Omar Ramirez Anaya insists he had nothing to do with the situation, that the accusations are false, and that he will continue to seek the incarceration of the woman responsible for his brother’s death.

Luis Omar is not facing any charges for his alleged role in the abduction, stabbing, and sexual assault.

Edith Lopez, lawyer and member of the Citizens Committee in defense of Yakiri, says she has represented various women in Mexico who have been incarcerated for defending themselves in violent situations. She cites the case of a young mother named Montserrat: “She had an argument with her partner while she was cutting vegetables, so when her partner started to hit her she defended herself with the knife and unfortunately punctured his lung and the man died.” When Lopez brought up the self-defense argument to authorities holding Monserrat, it was rejected. “They called it murder in the context of a fight.”

Lopez says Montserrat was accused of provoking the argument even though there was a documented history of domestic violence that had led to her prior hospitalization.

As for Yakiri Rubio’s case, Mexico City’s Human Rights Commission documented several irregularities in an amicus curiae. It states the district attorney’s office and the judge in the case failed to comply with the proper protocols for victims of sexual violence by denying medical and psychological services, failing to conduct a rape test, and holding Rubio in the same room as her alleged assailant as she was testifying against him in the police precinct.

The brief also notes that photos of her arms, bloody and cut up from what Rubio says were stab wounds inflicted by the Ramirez Anaya brothers, disappeared from her case file. The photos only reappeared after her family made their copies public.

Tilemy Santiago, a criminologist who works with the non-governmental Mexican Institute for Human Rights and Democracy, says he is not surprised by the irregularities in the case. Failure to adhere to protocol is something he witnessed when he worked at the city’s investigative agency.

“The majority of people will not have access to justice with all the means of investigation that are available to the prosecutors’ office,” says Santiago. “This is the case for both local and federal prosecutors. They will only use all the technology at their disposal for cases that are considered ‘relevant.’ A relevant case is one in which the victim has enough political or economic power so that their case is actually taken into account. Sadly, it is clearly evident that some people’s lives are worth more than others.”

Santiago suggests that it was easier for authorities to show that Yakiri killed Miguel Angel than it was to prove that Miguel Angel raped Yakiri, leading them to pursue the least complicated line of investigation.

Yakiri Rubio is due to appear in court in the coming weeks. If convicted she can serve up to a 10 year sentence. Those who came out to greet her during her release say they will continue to mobilize in her defense uniting under the slogan “if you attack one of us, you attack all of us.”