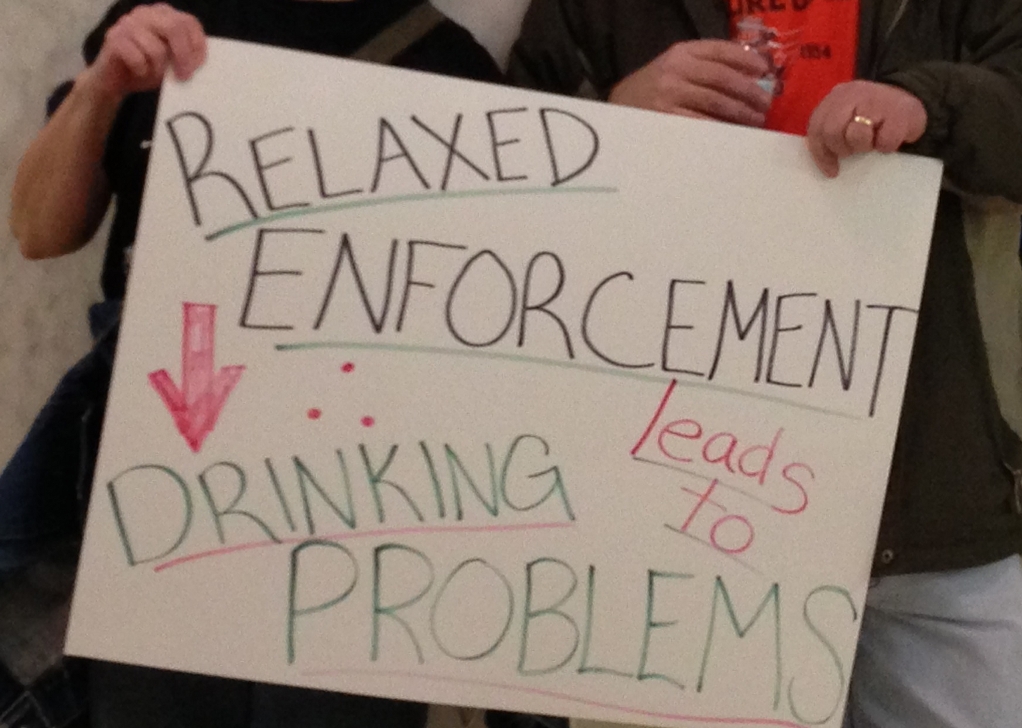 The next chapter in the saga of a chemical spill two months ago into West Virginia’s biggest public water supply is a new law passed by the state legislature over the weekend. Fueled by citizen outrage and activism, the bill aims to address some of the problems caused when an estimated 10,000 gallons of a chemical used in coal processing, known as MCHM, leaked from a holding tank on the Elk River just upstream from the public water intake serving 300,000 residents. Melinda Tuhus reports from Charleston.

The chemical leak was first reported on January 9th – not by Freedom Industries, the company storing the MCHM, or by the West Virginia American Water Company, whose supplies were contaminated – but by the state’s Department of Environmental Protection (DEP), following several complaints from customers that the water smelled like licorice. People in nine counties including Charleston, the biggest city, were told not to use the water for any purpose, causing not only hardship but fear of what the health impacts might be, especially since they were using the water after it was contaminated but before the Stop Use order went out.

Many reported rashes, diarrhea and respiratory problems and some were hospitalized. Four days later, the water company announced the system had been flushed and the water was safe. But two months later, few people here are drinking it, instead relying on bottled water or water brought in from outside the contamination zone.

“No one has been drinking it because we’re still doing the in-home testing,” explained State Senator Chris Walters. “Everyone is trying to wait to figure out from an outside source not connected with the government of West Virginia what the real numbers, what the real information is.”

Following several lawsuits filed against it, Freedom Industries declared bankruptcy. A federal criminal investigation is underway to determine what laws the company may have broken.

Many groups supporting legislation to prevent such a public health disaster in the future held a rally inside the Capitol on the last day of the session. MCHM is one of more than 60,000 chemicals grandfathered into approval without proof of its safety under the 1976 federal Toxic Substances Control Act, explained Maya Nye with People Concerned About Chemical Safety. She said one thing taken out of the bill was a public right to know measure, but that several improvements are included.

“We have long-term medical monitoring that is included in the bill,” said Nye. “There are individualized permits that will allow greater enforcement and inspection in areas around drinking water intakes, which is really important and it’s one of the reasons we’re in the situation we’re in right now, because those inspections weren’t happening. We will also have early warning monitoring systems, which basically mean the drinking water sources will be better detecting what’s coming into their intake.”

The coal and chemical industries dominate the state of West Virginia, and men in suits were lobbying lawmakers to weaken the bill until the final gavel came down. Dr. Rahul Gupta, executive director of the Kanawha-Charleston Health Department, said the final bill is fairly weak on consumer protections, but is better than what existed before the spill, the most widespread of several recent chemical spills in the area. He also drew a distinction between passing a law and its implementation.

“A lot of this will depend on how it’s enforced because remember the devil’s always in the details, in the rulemaking.” explained Gupta. “Rulemaking will probably decide what’s done, whether it’s watered down further or the people wake up and say, ‘Hey, we need to do something about this.’ The rulemaking will come from different agencies that include the Department of Environmental Protection as well as the Department of Health.”

Many residents believe the state DEP is beholden to the coal and chemical industries because often existing laws are not enforced.

Paul Corbit Brown is president of the Keeper of the Mountains Foundation, an organization opposed to mountaintop removal mining, which uses MCHM in its prep plants. He collects rainwater to meet his needs, but says this water disaster affected everyone in the state one way or another.

“If there’s any silver lining it’s the fact that now, maybe for the first time in 150 years, the people of this state are waking up to the realities,” said Brown. “And the realities are that this “one time” instance in January was not a one-time instance. It’s something that’s been going on repeatedly for decades in this state. The water has been continuously poisoned.”

He added that a state senator introduced a Constitutional amendment declaring that the people of West Virginia own the water within the boundaries of their state: “The reason that’s important is because in other places there are actually corporations claiming to own the water. In fact, there are places where if you collect rainwater you can be fined for it because you have deprived them of their right to that water that they supposedly own. There are certain things that can’t be owned by a corporation; they should be basic human rights.”

The amendment didn’t come up for a vote, but with many more West Virginians now involved in the political process, securing the right to safe water may come up again next year.

(Photo credit: Melinda Tuhus. Song at the start of the report performed by singer/songwriter, Marium Bria.)