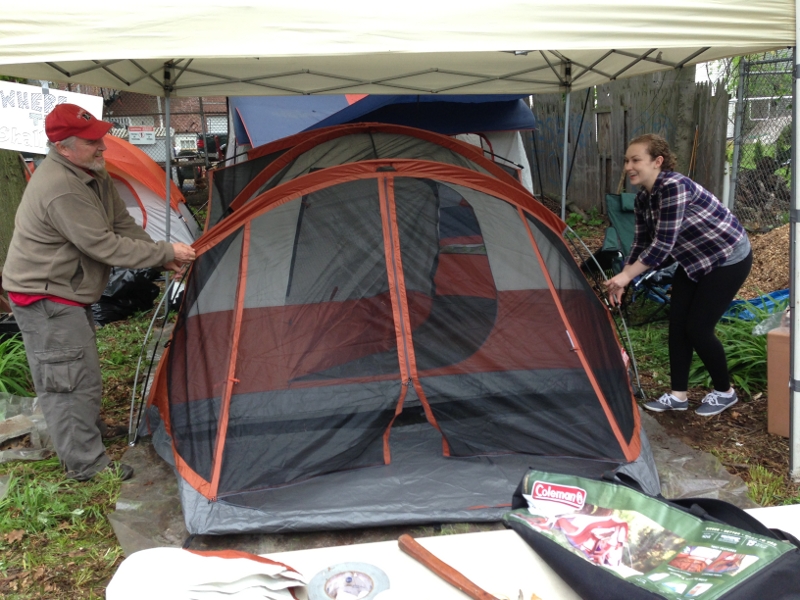 Mark Colville and his daughter, Kelley, set up a tent.

There are almost 21,000 “seasonal beds” at homeless shelters around the United States, according to the National Alliance to End Homelessness.

In New Haven, Connecticut, the city’s overflow shelter for the homeless closed two weeks ago for the season, to reopen once cold weather returns. Local advocates for the homeless worked with some men who were evicted from the shelter to create a safe haven last Thursday on a city-owned piece of land in one of the roughest parts of town. The new encampment lasted just one day before city workers took down the tents last Friday, and police arrested two members of the Catholic Worker community down the block for refusing to leave the property.

New Haven already provides many services for the homeless – shelters, drug rehab programs and food pantries – who often come in from neighboring towns, putting a strain on the city budget. But activists say punishing the homeless is not the answer. Melinda Tuhus reports.

In building their safe haven on Rosette Street in the Hill some homeless men and neighbors on the street erected four big tents, nestled between trees. Canopies covered two long tables where food was served.

Organizers had been told they were trespassing on city property and would have to dismantle everything, but several of the homeless men said they preferred this to living in a shelter, even if it reopened, where they had to contend with the forced intimacy of close quarters, and where many residents are dealing with trauma.

“I’m happy about this place,” said Leo Donis, who helped clean up the property and set up the tents. “I’m happy about all the people that work doing all this great job for us, because I’m not the only one staying on the street, and some people like me, that it’s hard for them to walk or they are sick, they live sometimes on the street, abandoned cars, sometimes abandoned houses and they got somebody calling the police.” Donis is one of the men evicted from the overflow shelter with its 75 beds.

One man, who called himself Anonymous, said he spent last six months in the overflow shelter. “Grand Avenue only holds 75 beds, and when you got a few hundred people who ain’t got nowhere to go,” he told FSRN, ran down the list of other possible places he might stay. “We can’t sleep on the Green, ’cause Yale don’t want us down there. The Columbus House only can hold so much. These people over here are giving us an opportunity to stay somewhere, and it’s a problem with the city ’cause we’re sleeping, and eating? It shouldn’t be a problem.”

The mention of Anonymous conjures memories of the Occupy New Haven encampment, which sat on the Green downtown, right next to the Yale campus, for six months before finally being dismantled amid several arrests in April 2012.

Mark Colville established the Amistad Catholic Worker House of Hospitality in the Hill neighborhood with his wife Luz 20 years ago. “We’ve been saying all along that this is an act of hospitality in an emergency,” he said, clarifying the encampment was not meant to be another Occupy. “We have people who are literally on the street, sleeping behind dumpsters and such, and it’s a direct result of the city’s actions to close the overflow shelter last week.”

As city workers, police and a representative of Mayor Toni Harp arrived with donuts, coffee and a half dozen umbrellas as rain threatened, Colville continued: “We want the city to leave us alone, for one simple reason: we know how to take care of each other. We chose this place intentionally. Think of all the public, more embarrassing places for the city that we could have chosen to do this. And yet we take this little, secluded back of a lot, with a community garden in front and a whole pile of garbage in back before we showed up here, which happens to be right next to the Amistad Catholic Worker house, so not only can people have a safe place to sleep; they can have two meals a day at the Amistad house; they can go to the bathroom there; we know how to take care of each other.”

Asked what he’d do if all 75 men from the closed shelter showed up, he said the Catholic Worker philosophy is there’s always room for one more.

Frank D’Amore, deputy director of the Livable City Initiative, said the officials had to shut down the improvised encampment because the city would be liable for any problems that arose on-site. He added that the city wants to try to find “an alternate location for anybody that’s staying here, and ultimately clean off the lot. Camping is not a permitted use in the city, especially on a sliver lot wedged in a neighborhood.” D’Amore insists camping is not an option due to health and safety issues.

Outreach workers from Columbus House, which provides a range of services for the homeless, arrived on the scene to survey the homeless men about their needs as part of the city’s latest push to provide permanent housing by July 31st to most of the city’s 140 chronically homeless residents. The mayor’s aide promised the men beds in a different shelter and offered to drive them there in a city van. Activists learned that beds were available only because several men in that shelter had reached their 90-day limit, and now they were the newest homeless.

The advocates say they share the city’s goal of finding permanent housing for the chronically homeless. Coleville suggests if the surrounding towns aren’t doing their share, then the city should get an agreement from the region to take care of the homeless, not blame the victims.

Mayor Toni Harp worked for 20 years at a community health center on a project focused on health care for the homeless, and for those same 20 years she represented New Haven in the state legislature, where she also championed programs for the homeless. Harp has agreed to meet with those behind the one-day Rosette Street safe haven on Thursday.

Photo: Mark Colville and his daughter, Kelley, set up a tent for the homeless on a city-owned lot. Credit: Melinda Tuhus.