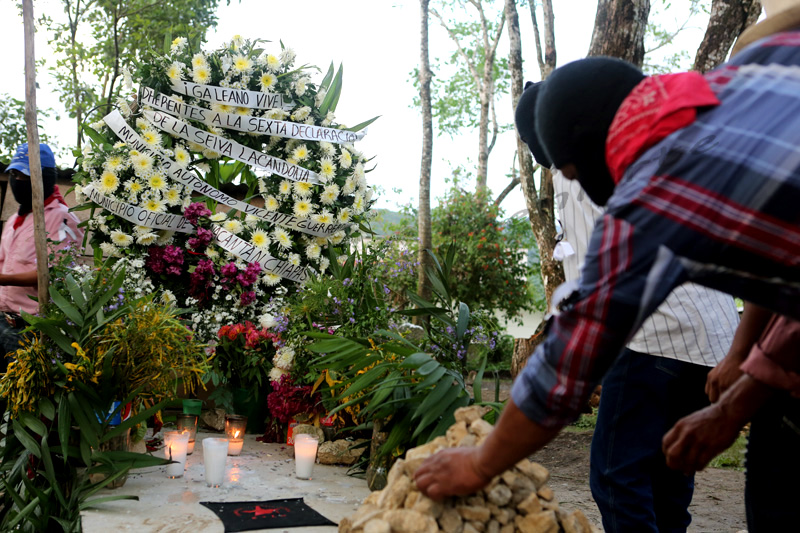 Zapatista support base members places stones on the grave of Galeano, in La Realidad during an homage to their fallen compañero killed in a paramilitary attack.

Nearly 4000 people traveled over the weekend to the depths of Mexico´s Lacandon Jungle to pay homage to a murdered Zapatista teacher who had been deeply involved in the rebels’ latest initiative and autonomous government. During the event, the EZLN´s iconic spokesperson, Subcomandante Marcos, made his first public appearance in five years only to announce his final act. Tim Russo brings us more from La Realidad, Chiapas.

Thousands of masked Mayan Zapatistas and hundreds of Mexican and international supporters gathered in the village of La Realidad on May 24th to condemn the brutal murder of Jose Luis Solis Lopez – known by his nom de guerre as “Galeano”.

The Zapatistas say the homicide was part of a premeditated paramilitary attack by members of the CIOAC-H, an organization of small farmers with ties to Mexico’s ruling party. The May 2nd attack was the latest in a series of similar acts of violence by the CIOAC-H since late January.

Zapatista spokesperson Subcomandante Insurgente Moises described it as part of an ongoing government strategy to pit indigenous farmers who accept government aid against Zapatista civilian communities. “The bad governments want us indigenous people to kill each other,” he said to the audience gathered in La Realidad. “They want us to lose our heads, to be crazier and more murderous than they are, so they can tell the media they’ve bought off that it’s a community-level problem.”

The Fray Bartolome Human Rights Center found that 15 unarmed Zapatista civilians were wounded in the May 2nd attack, which also led to the destruction of the local Zapatista clinic, school and three vehicles.

While the EZLN never disarmed, it has opted to avoid armed conflict over the last twenty years. Its civilian base has built up an autonomous governance system, including significant health and education infrastructure without state or federal funding.

The Zapatistas launched an initiative last year called the “escuelita” – or little school – to share the lessons of building autonomous institutions with national and international supporters. Galeano, the murdered teacher, played an important role in the escuelita effort.

Fredy Romolo, a youth coordinator with the Brazilian Landless Movement (MST), has been visiting EZLN communities as part of three month exchange program. “Just like the Zapatistas are in the process of territorial defense, the MST also has a process of struggle against the capitalist system,” commented the 18-year-old. “Land defense, the struggle for land, for freedom and it revolves around the struggle against capitalism.”

After midnight, between intermittent tropical downpours, and hours after the thousands present in  La Realidad had visited the grave of Galeano, the enigmatic Subcomandante Marcos came on stage to speak publicly for the first time since 2009.

Marcos, who has been the figurehead and media magnet of the Zapatista movement since its January 1st 1994 surprise appearance, had come to announce he would no longer be the voice of the EZLN.

He said that the time had come, to be replaced, not because of internal struggles, personal sickness or death as rumors have suggested over the last years, but rather because he had gone from being a “spokesman to a distraction.” Marcos added that his persona was a bridge character the EZLN had created to interact with a media and public that has persistently ignored the indigenous commanders and traditional community leaders.

“This figure was created and now its creators, the Zapatistas, are destroying it,” said the longtime EZLN spokesman. “And we saw that now, the full size puppet outfit, the character, the hologram, was no longer necessary. Time and time again we planned this, and time and time again we waited for the right moment – the right calendar and geography to show what we really are to those who truly are. And then Galeano arrived with his death to mark our calendar and geography: here, in La Realidad; now, in the pain and rage.”

In his hour-long speech, Marcos told the crowd of Zapatista insurgents, civilian supporters, and national and international visitors they had been called to La Realidad to un-bury Galeano and to leave another in his place so that he may live again.

Moments after departing the stage for the last time as Subcomandante Marcos, a familiar voice came over the crackly sound system, stating “My name is Galeano, Insurgent Subcomandante Galeano… Is anyone else here named Galeano?”. Various in attendance responded in the affirmative.

The Zapatistas placed responsibility on alternative media to cover the gathering, explicitly prohibiting commercial media outlets from entering La Realidad. Much of the coverage that did appear in the commercial press focused on what they consider to be an identity shift from Marcos to Galeano.

On Wednesday, Subcomandante Moises announced in a communique that the escuelita project will resume with new dates for graduates and new students coming soon.

The indigenous spokesperson also stated the community of La Realidad plans to rebuild the clinic and school destroyed in the May 2nd attack and has accepted the proposal of the Fray Bartolome Human Rights Center to establish a peace camp in the village to observe the ongoing tense situation.