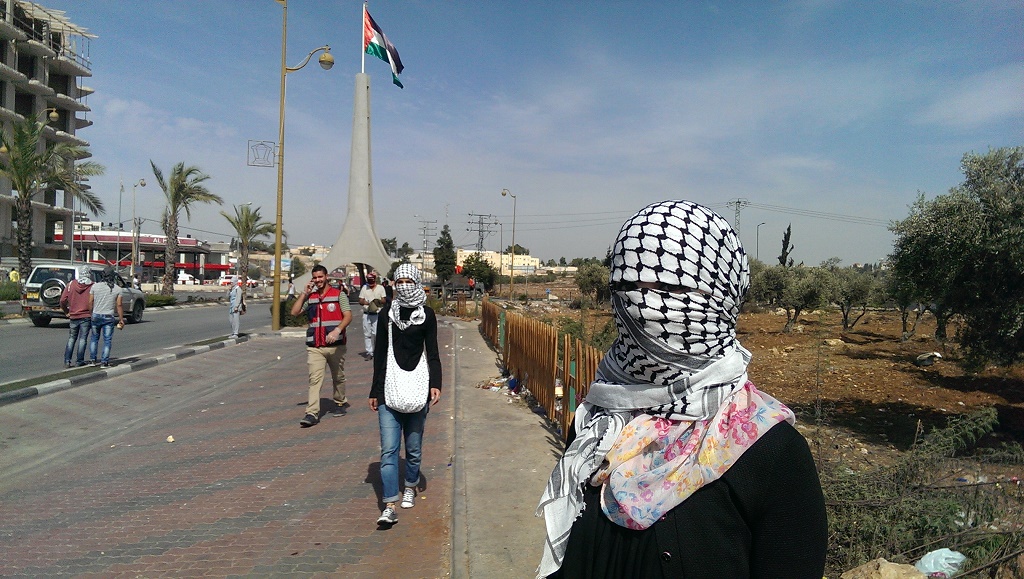 Dozens of young girls, many in school uniforms, joined their male peers at a protest outside the Israeli military compound Bel El, outside Ramallah. Dima, 18-years-old, says "We are not afraid of the Israelis. We want to show that boys and girls can do anything to bring Palestine back to us and we believe that one day it will happen." (Photo Credit: Lena Odgaard)

Friday morning, in Hebron in the West Bank, Israeli security forces shot and killed a Palestinian man just as he stabbed and wounded an Israeli soldier. A Palestinian TV crew, which was filming live, caught the incident on camera.

As a response to the attacks, Wednesday Israel introduced a series of new security measures in Jerusalem including roadblocks and checkpoints, increasing the number of police and military forces and confiscating ID papers and property of the perpetrators. The same day two more attacks were carried out in the holy city – in both cases the alleged perpetrators were shot and killed.

Later Wednesday evening in a televised speech, the Palestinian president Mahmoud Abbas addressed his people for the first time since the current escalation in violence.

“The Israeli aggression against the Palestinian people, land and holy places continues to escalate,” Abbas said. “The racist barbarism exacerbates the ugliness of the occupation, in a way that threatens peace and stability and the igniting of a religious conflict.”

Abbas called for a continued struggle against the Israeli occupation and said the current aggression carried out by the Israeli government and settlers is unacceptable.

Protests calling for an end to the Israeli occupation continued in Gaza and the West Bank. By the Israeli military compound Bel El, outside Ramallah, dozens of young girls, many in school uniforms, joined their male peers. 18-year-old Dima came straight from university saying her parents didn’t know she took part in the protests.

“We are not afraid of the Israelis,” Dima told FSRN. “We want to show that boys and girls can do anything to bring Palestine back to us and we believe that one day it will happen.”

According to the Palestinian Ministry of Health, thousands of Palestinians have been injured, hundreds due to Israeli use of live ammunition against the protesters.

The UN, the U.S. and several human rights organizations, including Human Rights Watch and Amnesty International, accuse Israel of excessive use of force and warn that this is only leading to further escalation of the violence.

According to Shawan Jabarin from the Palestinian human rights organization Al Haq, the use of excessive force is not something new. He points out that this year alone Israeli soldiers and settler extremists have killed more than 25 Palestinians, all before October’s escalation.

Jabarin has analyzed videos documenting the shootings of several of the alleged attackers and sees little evidence of a threat to the lives of Israeli soldiers or policemen before they opened fire. “This gives us an impression that these days the military and police they shoot to kill it’s like extra-judicial killing. It’s not just using excessive use of force.”

Tension has long simmered about control of holy sites in the region. Amid the escalation, the tomb of Joseph near Nablus in the West Bank was set ablaze Friday morning reportedly by Palestinian youth. The shrine, holy to Jews, Christians and Muslims alike, is frequently visited by Jewish pilgrims escorted by Israeli military and met by Palestinians protesters.