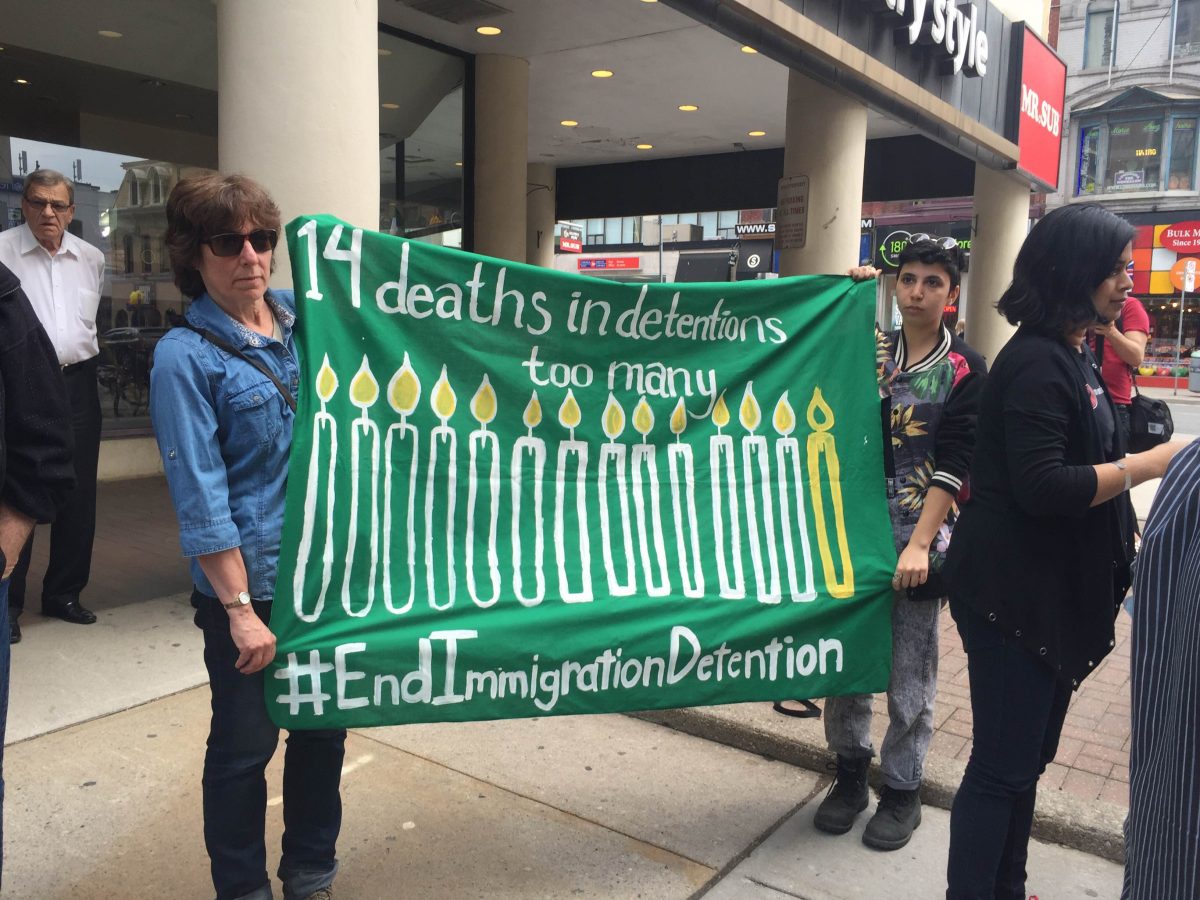 Demonstrators are a rally in Toronto for the reform of Canadian immigration policies. (Photo credit: Jillian Kestler-D’Amours)

Protests against immigration detention are mounting in Canada, both within and outside of the jails used to hold detainees. At least 14 people have died in CBSA custody since 2000, two of them last month.

Forty-year-old Chilean father of four, Francisco Javier Romero Astorga, was found dead in his cell on March 13th at Maplehurst Correctional Complex in nearby Milton, Ontario. Little is known about how the men died because the CBSA has not publicly released any details.

In a message recorded for supporters in Canada, Astorga’s brother Esteban said Canadian officials have also not shared any key information privately with his family.

“We are fighting now to know the very, basic things. Did he ask for a doctor? Did he get proper medical help? How long before someone checked on him?” Esteban asks. “We need and want answers for our brother, but most important, we do not want this to happen to anyone else, too.”

Protests are also occurring inside of the prison system, where immigrants awaiting hearings are held with convicted criminals. Immigrants at the maximum security Central East Correctional Centre, an hour and a half north of Toronto, refused meals last week in protest of their detention. CBSA says detainees resumed eating about 24 hours later, after a meeting with immigration authorities.

CBSA spokesperson for the Greater Toronto Area Travis O’Brien declined an interview request about the detainee action, but read out a written statement from the agency: “The CBSA maintains an employee on-site at the Central East Correctional Centre and the role of this individual is to liaise with the detainees directly, address and communicate any complaints, coordinate hearings and daily detention reviews, and ensure management is informed of any issues raised at the facility.”

Activists said the CBSA promised to return in two weeks with answers to the detainees’ concerns. Under Canada’s Immigration and Refugee Protection Act, the CBSA can detain immigrants for indefinite periods of time, without charge or trial, if the agency deems them security threats or flight risks, or if it considers their identity papers to be insufficient.

Most immigrant detentions occur at formal ports of entry into Canada, but officers also have the power to detain foreign nationals and permanent residents within the country. In recent years, even routine encounters with police, like traffic stops, have resulted in lengthy periods in immigration detention. Advocates also point out that authorities have used refugee fears of deportation to argue that certain immigrants pose a flight risk.

A University of Toronto study found that Canadian authorities detained more than 7,300 immigrants in 2013.

Laura Track is a staff lawyer at the BC Civil Liberties Association. She says that establishing an independent oversight body for the CBSA is a first step to reforming how Canada treats immigration detention.

“The problems with immigration detention run much deeper than just the lack of oversight and accountability for CBSA officers,” Track explains. “But from our perspective, creating an oversight and accountability review body is a step in the right direction to ensure that people who are detained have some kind of recourse, some kind of place to go, when they have a complaint about how they’ve been treated. Right now there’s just nothing.”

Immigration detainees are asking Canada to release them within 90 days if they are not being deported. They also want an end to indefinite detention in Canadian maximum-security prisons.

Canada’s Minister of Public Safety Ralph Goodale recently said he was open to new review mechanisms for the CBSA, but provided neither concrete details nor a deadline.