Since 2000, FSRN has been a reliable source of news that prioritizes people over institutions and governments. With more than 15 years on radio stations around the country, FSRN is legacy media. Long before easy internet access, many turned to their radios to hear the evening news, and counted on FSRN to broadcast unfiltered, grassroots reports. On independent radio stations from coast to coast and border to border, FSRN has long been the mainstream of the independents. 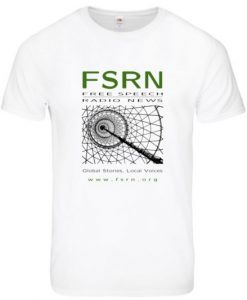 This week we launch our Spring Fund Drive, to keep the legacy of FSRN evolving in today’s new media ecosystem.  In the early 2000s as the internet grew increasingly accessible for everyday news consumers, FSRN pioneered a new model of audio news production – using the web to create a virtual,  worldwide newsroom reporting the local voices of global stories. New media at its core.

As an alternative to big-boy broadcasting, from its inception FSRN has been an alternative to a predictable and limited network of  voices, seeking out those people most affected yet least heard. And all the while independent and free of corporate underwriting or advertising dollars.

FSRN is new media nee legacy media, alternative and independent. We stay that way with your support.

Keep FSRN alive and thriving through the summer months.

P.S. – Check out our new T-shirt and other thank you gifts …