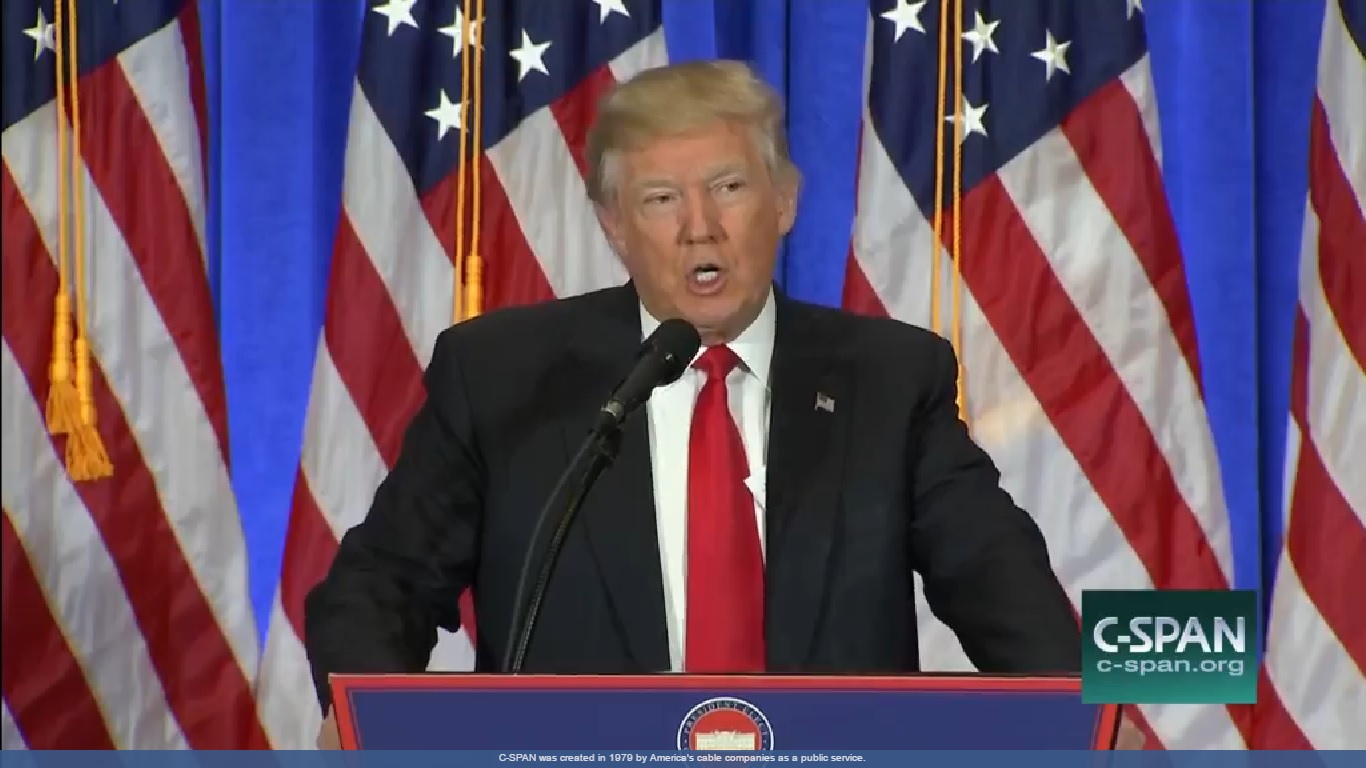 The lobby of Trump Tower was outfitted with American flags and a podium today to host Donald Trump’s first press conference since winning the election. Robert Packard has more.

President-elect Donald Trump’s first press conference in months came as three of his cabinet nominees were facing questions on Capitol Hill. It quickly took on the tone of a campaign rally as people sitting within the crowd of reporters clapped and cheered during Vice President-elect Mike Pence’s warm-up speech.

The vocal supporters also played a role in shutting down a journalist who refused to let Trump dodge a question about complying with the longstanding presidential practice of releasing tax returns.

“You know the only one that cares about my tax returns are the reporters,” said Trump during the testy exchange as supporters applauded.

The President-elect was openly hostile to BuzzFeed, which published a story alleging he knew about Russian hacking of DNC email servers during the election and that Russian intelligence agents had a compromising video of Trump with sex workers in a Moscow hotel room – allegations Trump repeatedly denied.

Trump also addressed concerns about his refusal to divest from his business empire ahead of taking office by saying he’s not legally obligated to do so.

“So I could actually run my business and run government at the same time,” he said, citing a “no conflict of interest provision” granted to the office of the president and vice president.

Trump announced he will instead place his company in the hands of his two adult sons.

Reading from a prepared statement, attorney Sheri Dillon nixed arguments against fully separating the president-elect from his well-known assets: “Some people have suggested a blind trust, but you cannot have a totally blind trust with operating businesses. President Trump can’t un-know he owns Trump Tower and the press will make sure that any new developments at the Trump organization are well publicized. Further, it would be impossible to find an institutional trustee that would be competent to run the Trump organization.”

But Trump did play up one so-called asset he plans to bring with him to the White House.

“If Putin likes Donald Trump, guess what folks, that’s called an asset, not a liability,” remarked the president-elect. “Now, I don’t know that I’m going to get along with Vladimir Putin. I hope I do, but there’s a good chance I won’t. And if I don’t, do you honestly believe that Hillary would be tougher on Putin than me? Does anyone in this room really believe that?! Gimmie a break.”

Rather than allay concerns, Trump’s plan to transition control of his private business interests to his oldest sons caused the executive branch’s top ethics advisor to raise bright red flags. In a speech delivered at the Brookings Institution just hours after Trump’s press conference, Director of the Office of Government Ethics Walter Shaub said Trump’s plan – quote – “doesn’t meet the standards that the best of his nominees are meeting and that every President in the past four decades has met.”

Shaub also took issue with the Trump team’s interpretation of ethics code and outlined what would be standard procedure for divestiture and the creation of a blind trust to separate the President-elect from his potentially conflictive financial interests.

The career ethics official reiterated his invitation to the Trump team to work out a plan in keeping with longstanding ethical norms, but said the Office of Government Ethics has thus far been left out of the process.

[Editor’s note: This story was updated to include remarks from Office of Government Ethics Director, Walter Shaub.]