(OAXACA, Mexico) Documenting street art has been a habit of mine for the better part of 15 years. It’s something that has become a reflex of my travels and one of the many things that makes Oaxaca City so special. I am convinced that Oaxaca has the best quality street art for any city of its size in the world.

Street art is a form of communication. Sometimes it literally takes the form of “the writing on the wall” and other times it transmits messages in a visual language. As a journalist, I’ve found that “listening” to street art is a way of taking the social pulse of a city.

As one of two editors at FSRN, I know there’s a tremendous amount of behind-the-scenes work involved in keeping this independent journalism project thriving. This year – FSRN’s first after a forced hiatus – I wanted to offer something special to supporters. This calendar combines two of my longtime passions. Make a tax-deductible donation of $100 to FSRN and pick up a limited-edition wall calendar featuring some of my favorite examples of street art in Oaxaca City over the years.

Documenting street art has taught me never to assume something that is here one day will be there the next. Murals are fleeting and subject to painting over. It also offers a parallel message for those who take the pulse of the streets from journalists who report from them: don’t take independent outlets for granted.

Truly independent media relies on audience support. Don’t assume someone else will pick up the tab. Even a $10 donation helps to pay the bills, keep the website online, the stories on the air and freely available to all. Please make a tax-deductible donation today.

Click any image to launch slideshow and read captions. 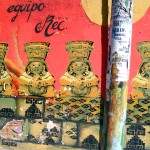 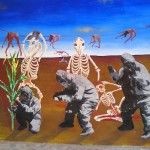 January 2015 – Defense of native corn is a big issue in Oaxaca, where corn was first domesticated over 7,000 years ago. 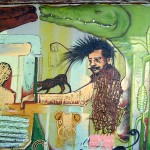 February 2015 – The man portrayed in this now painted-over mural is Oaxacan anarchist journalist, Ricardo Flores Magón, regarded as one of the thinkers behind the Mexican Revolution. 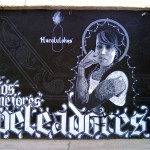 March 2015 – This mural was part of a collective project in the market town of Tlacolula, about 30mins from Oaxaca City. 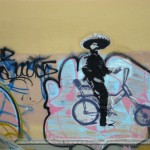 April 2015 – This long-gone image of Emiliano Zapata on a lowrider bike was put on a wall during a 2010 march. 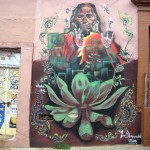 May 2015 – The plant featured in this storefront mural is a maguey (century plant) which is used to make mezcal. 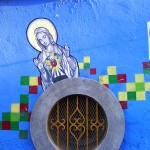 June 2015 – A virgin image adorns a window along a cobblestone-paved street. 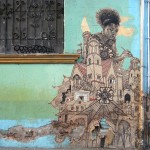 July 2015 – An international guest artist left this stunning work on the facade of an abandoned hotel. 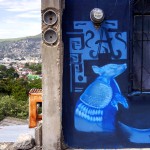 August 2015 – Detail of a mural on an apartment along Oaxaca City’s panoramic highway. 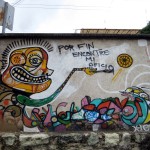 September 2015 – “I finally found my calling” reads this now-erased mural on a wall of the city’s now-defunct train station. 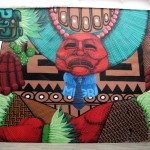 October 2015 – This mural took up an entire wall of a 2013 exhibit at Oaxaca’s Contemporary Art Museum. 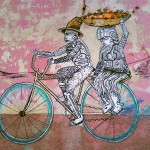 November 2015 – This piece adorns a wall in the ancient village of Xoxocotlán, now a suburb of Oaxaca City. 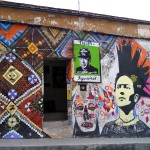 December 2015 – Frida Kahlo with a mohawk on the front of the Taller Siqueiros artist workshop. 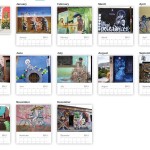