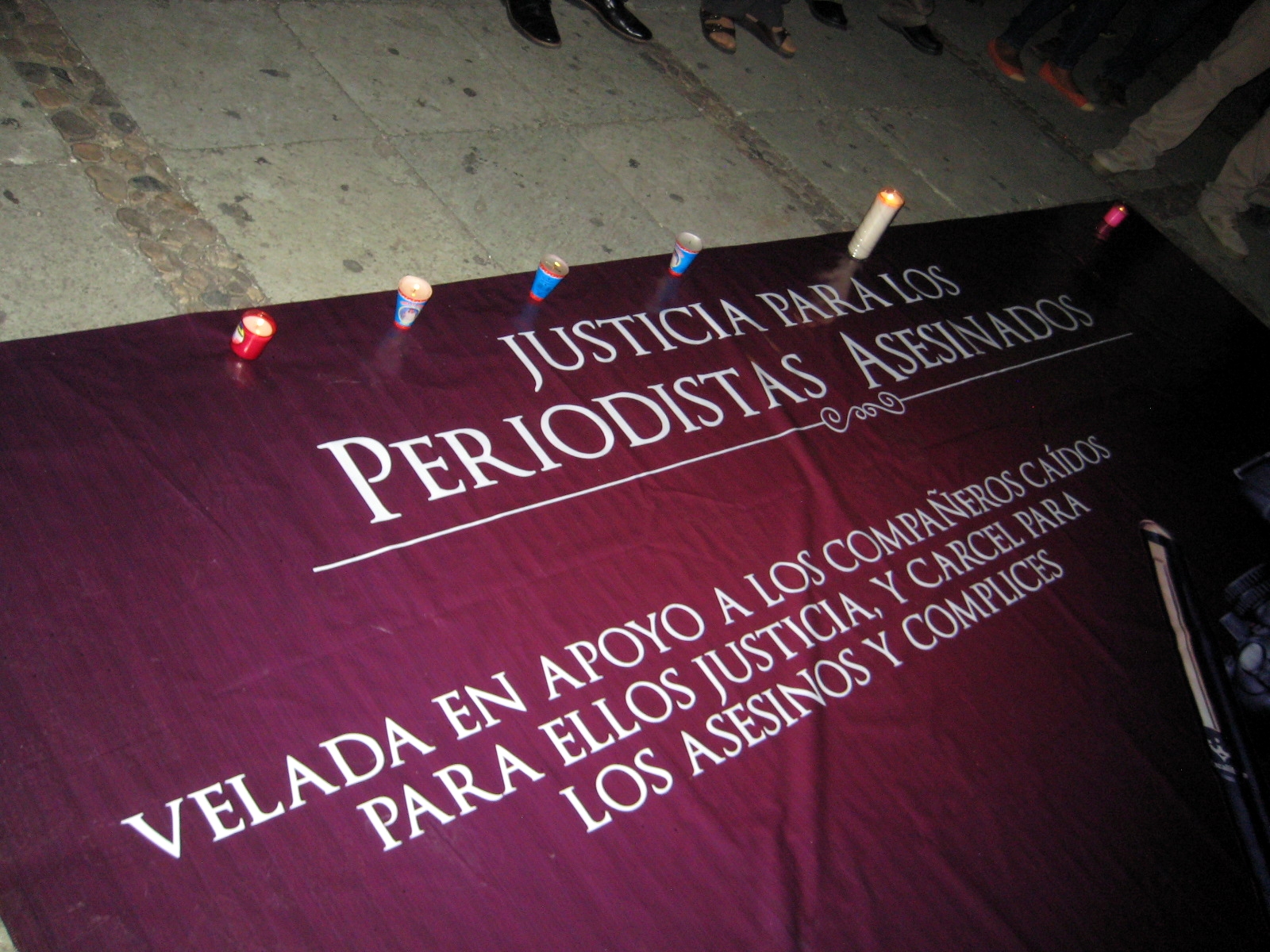 "Justice for Murdered Journalists" reads a banner at a vigil in Oaxaca City on Aug. 5, 2015.

Yet another journalist based in the Mexican state of Veracruz has been murdered. FSRN’s Shannon Young reports.

Authorities confirmed the death of Veracruz-based journalist Anabel Flores Salazar Tuesday afternoon after relatives identified her body, which had been dumped along a highway in the neighboring state of Puebla.

According to her family, armed men in tactical police gear took Flores Salazar from her home in the pre-dawn hours Monday, claiming to have an arrest warrant. But she never turned up in either police or military custody. Authorities suggest the kidnappers may have impersonated police and used ‘cloned’ patrol cars – a theory that has raised more than a few eyebrows given the state’s notorious reputation as Mexico’s deadliest region for journalists.

State investigators say they are pursuing multiple possibilities, including so-called “probable links” with an alleged cartel figure, noting that Flores Salazar was present at the scene of his arrest in 2014.

The innuendo linking the journalist to organized crime was repeated without question by multiple outlets. The reporter’s aunt, however, says Flores and her family were coincidentally dining in the same restaurant when the arrest occurred.

The official narrative, however, follows a pattern in which Veracruz authorities cast doubt on the character of targeted journalists, while downplaying any possible work-related motive.

On Tuesday night, more than 40 journalists, most of them based in Veracruz, signed an open letter directly challenging the investigation. Addressed to the federal government, the state governments of Veracruz and Puebla and their legislative bodies, the letter goes on to call for an end to a campaign of intimidation journalists face in Veracruz.

“We demand that you stop criminalizing murdered journalists and impeding freedom of expression in Veracruz. Criminalizing our murdered colleagues is really a cowardly strategy carried out by those who are obligated to investigate, not manufacture evidence against those unable to defend themselves against government smear campaigns. We demand the incapable Veracruz government end this ridiculous massacre targeting journalism. Stop this nightmare that you all have sparked throughout Veracruz. You don’t want us to write about tragedies? Stop provoking tragedies. You don’t want to read about acts of violence? Then stop creating the conditions in which violence thrives. The press is only a mirror of real life. We’re not inventing anything, only writing it down.”

It’s a bold statement by a press corp in a state where at least 15 journalists have been killed and three others disappeared during the more than five years of the sitting governor’s administration.

Anabel Flores Salazar is not the first Veracruz-based journalist to turn up dead in a neighboring state. In July, photojournalist Ruben Espinosa was murdered with four women in a Mexico City apartment just weeks after he fled Veracruz due to threats. And in May of last year, the body of Veracruz-based radio reporter Armando Saldaña was found in Cosolapa, Oaxaca just over the state line from his hometown in Veracruz.