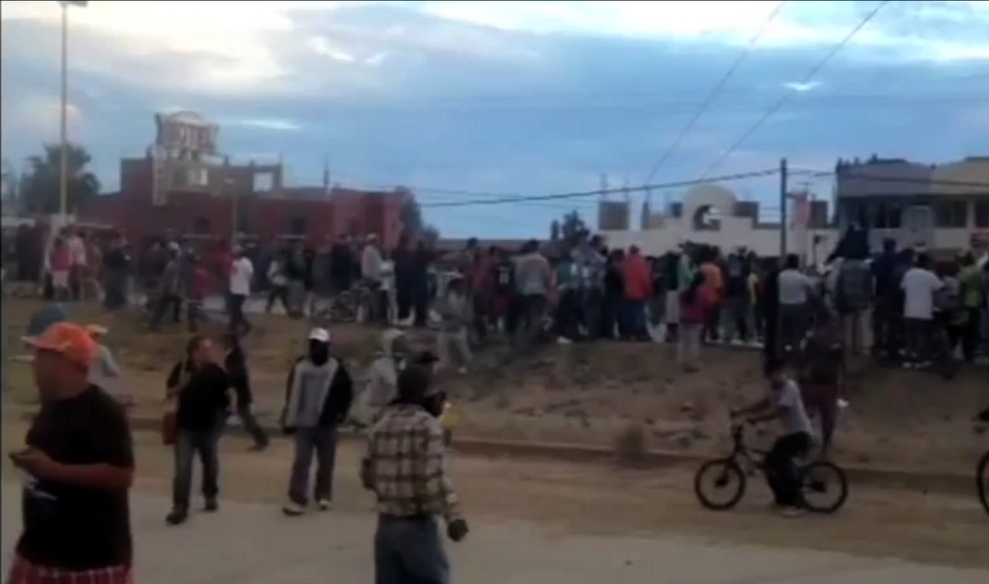 Farmworkers block the highway through San Quintin in protest of labor conditions. (Screenshot of a video published by La Jornada Baja California)

Thousands of farmworkers are on strike in the Mexican agricultural hub of San Quintin. The protests erupted last week with farmworkers blocking a key highway of the Baja California peninsula to call for better working conditions at a group of agribusiness operations that supply the U.S. market. Shannon Young reports.

So many farmworkers are participating in the San Quintin strike that media in the region just south of the Mexican border with California describe it more as a rebellion than a protest. When the strike first began on Tuesday, March 17th as many as half of the area’s 75 thousand farmworkers refused to show up to harvest the fruits and vegetables now ripe for export to U.S. markets.

The government responded with a quick and heavy hand.

State police in armored vehicles shot tear gas and rubber bullets at farmworkers blocking the Transpeninsular Highway and cell phone footage of the crackdown went viral. Police made around 200 arrests and soldiers were sent in to keep watch over the area mega-farms owned by a politically connected elite.

The vast majority of the farmworkers in the fields of San Quintin are indigenous migrant laborers from Mexico’s poorest states: Oaxaca, Chiapas and Guerrero. Their demands include raising the daily minimum wage to the equivalent of about $20, reducing the average workday from 12 to eight hours, payment of overtime for work performed on Sundays, the right to organize independent of the official unions and an end to rampant sexual abuse of women in the fields.

“There are labor laws but they aren’t respected,”  one woman told regional outlet Plex, without giving her name. “The bosses give us areas to clear that are far too big and they pay us a pittance. When I worked at the Núñez farm they paid me 50 pesos [just over $3] a day because they said I didn’t work fast enough and that I couldn’t say anything about it. I’m defending myself because nobody has given me any justice!”

Since the initial crackdown, state authorities have shifted into damage control mode, announcing a handful of social benefit programs and agreeing to direct negotiations with the farmworkers. The outcome of those negotiations may determine the fate of the valley’s spring harvest.