“The Day We Fight Back” against government and corporate surveillance 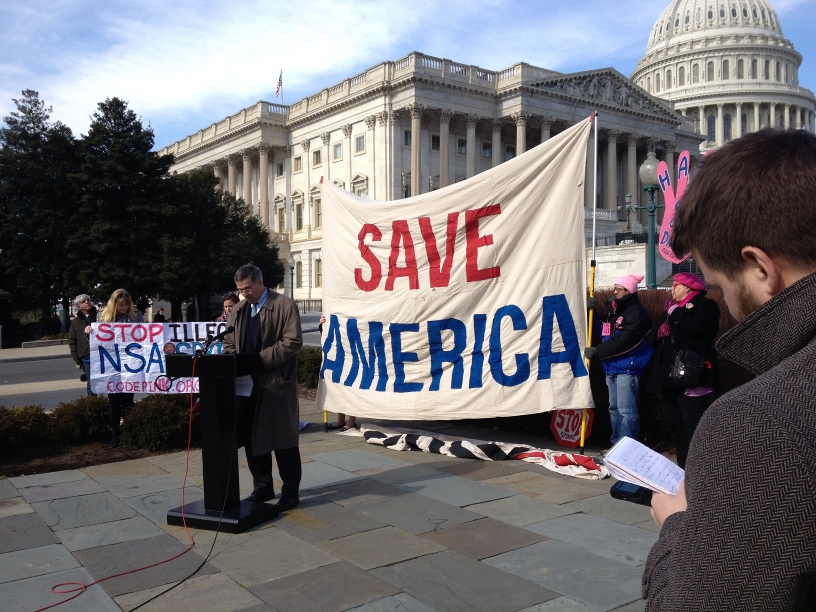 Civil liberties advocates around the world have dubbed Tuesday, February 11th, “The Day We Fight Back,” and are staging protests online and in the streets against mass surveillance by the government and corporations. More than 5,000 organizations – including Greenpeace, the American Civil Liberties Union, Amnesty International, Reddit and Tumblr – are displaying the following message on their websites: “Dear Internet, we’re sick of complaining about the NSA. “We want new laws that curtail online surveillance. Today we fight back.”

With surveillance reform currently on the back burner in a deeply divided Congress, organizers hope tens of thousands of web users will be inspired to flood the inboxes of lawmakers and urge them to support reforms that end the suspicionless, bulk collection of domestic phone and e-mail records. In Washington, DC, Alice Ollstein has the details.

The Day We Fight Back marks the two year anniversary of the successful online protest against the Stop Online Piracy Act, known as SOPA for short. Major websites went dark in protest of that law, which activists said would stifle free speech online, and formerly supportive lawmakers backed away from the bill. Organizers of Tuesday’s actions hope to re-energize that grassroots power and aim it at a different target: the mass surveillance carried out by the US government revealed this past summer in documents leaked by former NSA contractor, Edward Snowden.

DAVID SEGAL: You can actually have an impact when enough people speak out. An individual American has far less power than he or she should, but when millions of us rise up together, we can still make a difference.

That’s David Segal with Demand Progress, an open Internet advocacy group he co-founded with the late activist, Aaron Swartz. Segal and others planned the “Day We Fight Back” to also fall near the one-year anniversary of Swartz’s suicide, which occurred in the context of a prolonged legal battle.

Organizer Rainey Reitman with the Electronic Frontier Foundation explained that Swartz was facing decades in prison for downloading and publishing a database of academic articles, which violated a 1986 federal law called the Computer Fraud and Abuse Act.

RAINEY REITMAN: And in the wake of his death many people looked to the Computer Fraud and Abuse Act and said this law isn’t just. It overly criminalizes crimes associated with computers, frankly, probably because Congress didn’t understand enough about computer crime law when they first enacted it.

A small handful of lawmakers, lead by Oregon Democrat Ron Wyden in the Senate, introduced a bill to reform the Computer Fraud and Abuse Act early last year. But it has remained stuck in committee, gaining few supporters and making almost no progress since then. Wyden says he’ll keep trying in the year to come, both to bring US law more in line with current technology and honor Swartz’s memory.

RON WYDEN: Aaron was in this office during the battle on PIPA and SOPA and I remember it like it was yesterday. He was a wonderful advocate for Internet freedom and a big part of why I and other legislators feel so strongly about passing that law, which really updates a lot of rules with respect to computers that simply aren’t relevant to these times. It’s because of all he meant to us.

Wyden’s bill, which he named “Aaron’s Law” would amend the Computer Fraud and Abuse Act so that simply violating a website’s terms of service wouldn’t be grounds for a criminal charge. Wyden is also a supporter of the USA Freedom Act, a bill gaining support in the House and Senate that would end the bulk collection of Americans’ phone records among other major reforms.

But Reitman with the Electronic Frontier Foundation and other civil liberties advocates say they’re concerned a competing bill from powerful Senate Democrat Dianne Feinstein, will pass instead. That legislation – the FISA Improvements Act – would allow the NSA to continue sweeping up information on US citizens and foreign nationals without a warrant.

Still, Reitman said events over the past few month show that reform is more likely to come from Congress than the slow-moving federal courts or the reluctant White House.

REITMAN: This is really a key time in the fight against mass surveillance because Obama finally came out not that long ago and said that, after months of public pressure, that he would accept some forms of NSA surveillance reform. He took several steps in that direction. Many people feel that Obama didn’t go as far as he could in ensuring that the NSA had adequate oversight and wasn’t collecting information on people who are innocent.

Even as Obama showed he was going to cave slightly to public pressure, more and more people are turning to Congress and saying, “Hey, if Obama’s not going to do the right thing here, we need Congress to step in and close this deal and make sure the NSA stops these abusive surveillance programs.”

Other organizers of The Day We Fight Back, including David Segal, say the revelations coming out now about government surveillance have mobilized many people who worry about the impact such spying has on activism and dissent.

In addition to the global protest online, Tuesday’s action also involves in-person events all over the world, including a march in Stockholm, Sweden, a demonstration in San Francisco, California, various “cryptoparty” gatherings to learn how to use encryption software, and a speak-out by activists and lawmakers on Capitol Hill.