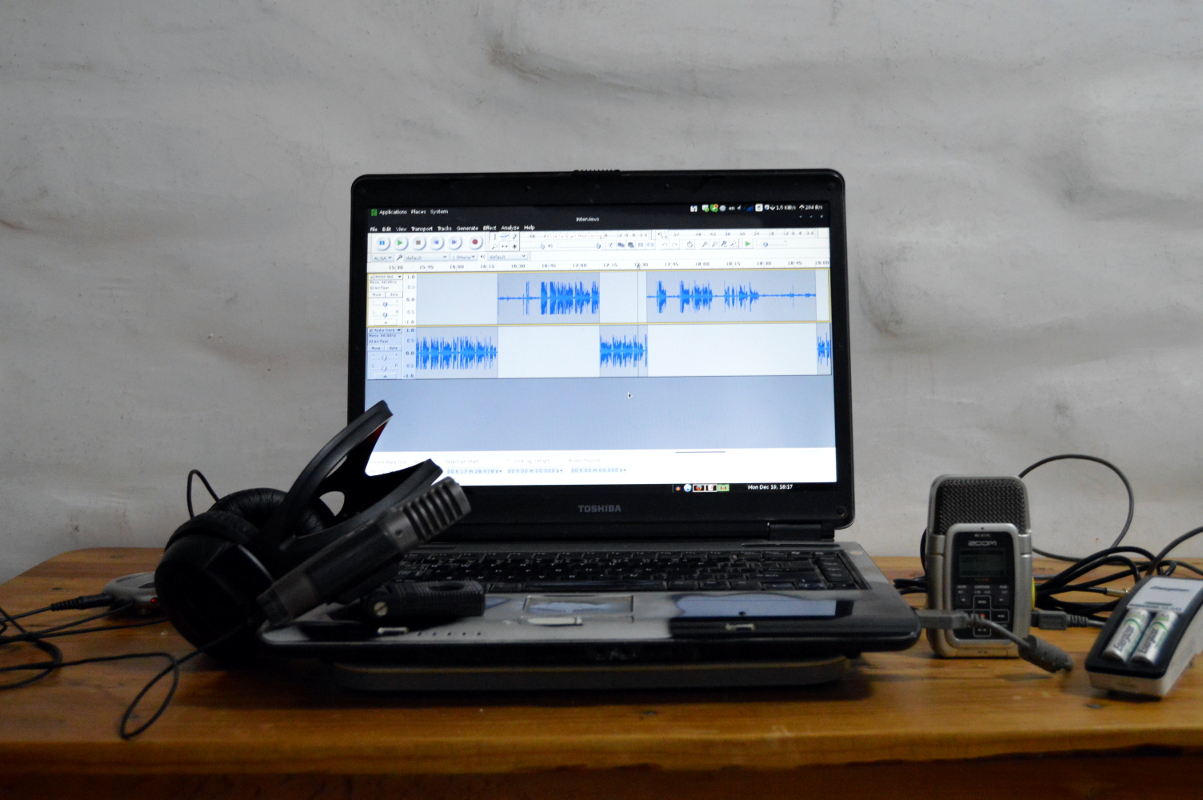 Since 2000, Free Speech Radio News’ mission has been to provide factual reports on important international and domestic news stories often missing  in the corporate press — and to amplify the voices of the ignored and unheard. Those voices have been broadcast on radio stations across the U.S. in tens of thousands of news stories spanning 17 years. Today FSRN itself is in the news because of the stories we can no longer tell.

The very first story reporter Lena Nozizwe produced for FSRN was about a transgender college student. Today her last report for us is about the beginnings, and the end of FSRN.

The year was 2000. The state of Vermont became the first to pass legislation legalizing same-sex couple unions. Hillary Clinton was elected to the U.S. Senate. And in a contested presidential race, the Supreme Court ruled that George W. Bush was the winner.

2000 also marked the birth of Free Speech Radio News, founded when a group of reporters went on strike against the Pacifica Radio network. The strikers said management was censoring coverage of internal politics at the flagship community radio organization. Independent radio stations across the country supported the strike by airing the newscast.

“One of my first recollections of Free Speech Radio News was when it split from Pacifica and became an entity all to it its own – an entity that was very collective in it’s nature which was rather unique,” says General Manager of WERU in Blue Hill, Maine, Matt Murphy, who was a listener and fan from the beginning. “This was an independent group and a group that we really valued very much. Free Speech Radio News rapidly became our daily news that came on the airwaves just before Democracy Now.”

FSRN became a worker-run collective and pioneered the decentralized newsroom model, with production staff in different cities around the world, rather than concentrated in media hubs like New York or Washington, D.C.

“Staff were in their offices or their homes or their studios, all around the world and gathered via conference calls to make decisions about what stories they could cover,” Abram recalls.

That was part of the allure for former FSRN anchor Dorian Merina: “On any given day at FSRN you could have an editor sitting in New Delhi, another in Oaxaca, Mexico, a producer in Miami, Florida, another in Los Angeles, and another still in the Philippines. And to me, this is what made FSRN so special. You had a network of people all over the globe coming together to decide what story should be told and how they should be told. And it made for something unlike anything else on the air during its time.”

More than 100 stations across the country soon began airing the daily newscast. One of them was KPFT in Houston, where FSRN grabbed the attention of Shannon Young as a listener in 2002.

“That’s when I heard Fariba Nawa on FSRN,” says Young. “She had phoned in a commentary that succinctly summed up just why it’s so important to go to journalists who are from or who live in the communities they report on, precisely because they understand and can convey a nuance that outsiders simply don’t pick up on.”

During seventeen years of reporting the news often ignored in the corporate media, hundreds of reporters around the world amplified the voices of the people in their communities – content that went into producing more than 23,000 headlines, features and documentaries heard on more than 100 stations around the United States.

Then in late 2013, all of FSRN’s voices, including Nawa’s, were silenced. The program ran out of funding after their main client and distributor fell months behind – and then defaulted – on payments.

During the silence, a skeleton team retooled and a few months later relaunched as FSRN, the Weekly Edition. Since early 2014, FSRN has been produced and edited by a bare bones staff of two, Abram and Young, plus part time technical engineer, Reaux Packard.

But even so, producing the program comes at a price that FSRN is no longer able to pay. Despite continued support from individual members and carriage fees paid by radio stations, it’s simply not enough. Abram says credible, well produced content is expensive.

“We’ve had no luck finding major funding, like grants from foundations or organizational support from The Corporation for Public Broadcasting and despite station carriage our direct distribution using social media has been slashed by algorithms that drastically limit the reach of our content,” Abram explains.

The loss is already felt by news director Aileen Alfandary, who says FSRN has been a staple at KPFA Community Radio in Berkeley, a station that was supportive of the initial strike that led to FSRN’s creation. And she wonders about the impact on journalism.

“FSRN’s demise comes at a time when too much of the news has been reduced to short soundbites, or yes tweets. The commitment of FSRN to dive deep into an issue has been more important than ever,” Alfandary says. “I am also concerned about what happens to the freelance journalists who have been filing for FSRN and whether if this will tip some of them out of the field, whether this will be the straw that broke the camel’s back, especially at this time, we need more independent journalism, not less. I am very, very sorry to see FSRN go.”

And she’s not the only one.