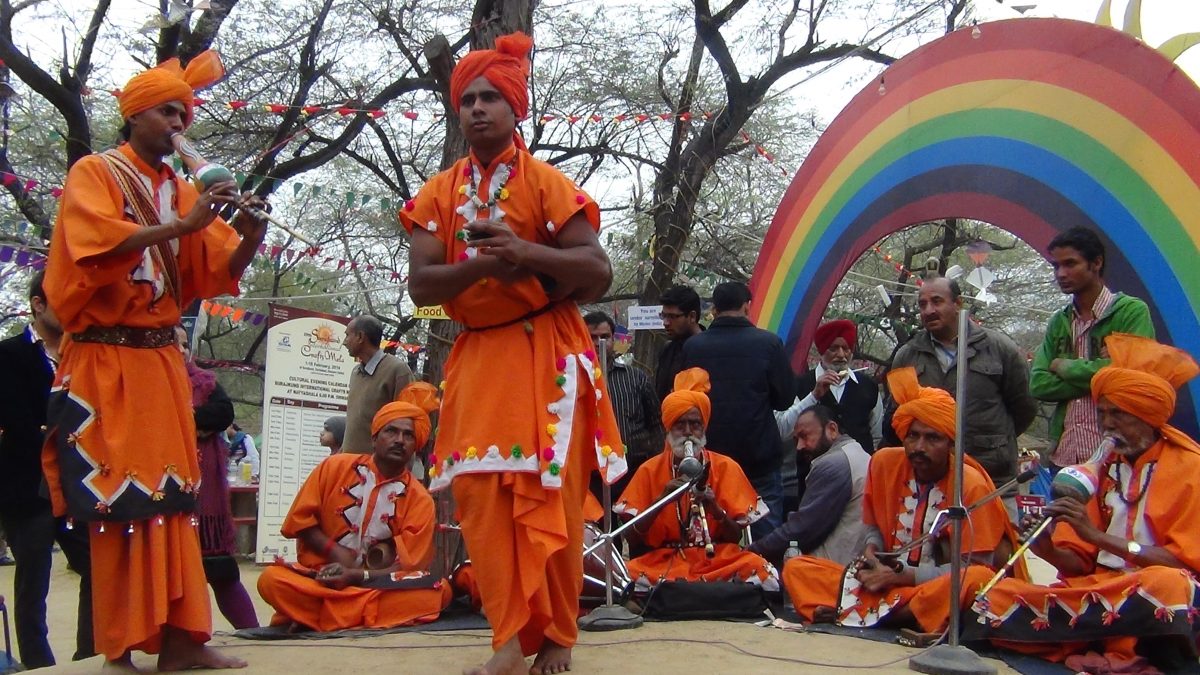 In India, snake charming has been a popular form of entertainment since ancient times. It has also been the only source of livelihood for hundreds of thousands of snake charmers. But several years ago, the practice was declared illegal, leaving snake charmers in dire straits. Bismillah Geelani reports on how the community is now struggling for survival.

At the Surajkund Craft Fair on the outskirts of Delhi, a group of local folk musicians is entertaining the visitors. Wearing orange dresses with matching turbans, they play melodious tunes of popular Hindi songs on the gourd flute – or Been. Their performances enthrall the audience and many break into dance. But the musicians themselves don’t look very enthusiastic.

“This is not what we want to do; it’s been thrust upon us,” says 75-year-old Badri Nath, who heads the troupe. “But since our original work has been banned, this is the all we can do. Whether we are happy or not doesn’t matter.”

Badri and his companions are all snake charmers. For generations, they made their living street performing with snakes in villages and towns across India. But snake charming in no longer legal, and Badri says that leaves them unable to make ends meet.

“Snakes and snake charmers have been together from time immemorial. This is the only thing we and our ancestors have known and lived on for centuries. Now it has been taken away from us. We have not only lost our livelihood we have been cut off from our roots,” says Badri. “These performances here can sustain a few us for a few days, but what after that? And what about the rest of the community?”

Snake charming was banned under the Wildlife Protection Act in the late 1990s. The law prohibits catching, owning and performing with snakes. Initially, the government didn’t enforce the ban, and snake charmers carried on with their work. But a few years later, animal rights activists pressured authorities to clampdown on snake charmers.

“They basically dehydrate them; they stick them in a box and forget about them, use them whenever they want to make a performance or beg some money from people,” explains Kartik Satyanarayan, from the conservation group Wildlife SOS, who says the charmers abuse the snakes, and there’s been a noticeable decline in their numbers. “Once the job is done they just throw the snake away, because they don’t care, and snake then sometimes dies, it takes some weeks of starvation to die because the fangs have been removed, the venom glands have been removed, they can’t really hunt and fend for themselves any more.”

But nnake charmers strongly deny the charges of animal cruelty. The ban affected an estimated 800,000 snake charmers living in India. Many switched to other occupations, like rickshaw pulling, street vending and working as construction and agricultural laborers. But an overwhelming majority remain jobless.

Some, however, refuse to give up the tradition.

Like this snake charmer performing on a Delhi street. He opens his baskets, and three cobras rise up, flaring their hoods in a menacing stance and appearing to dance to the music from his Been.

He then moves closer to the audience, showing them the reptiles and explaining differences between the species. But soon a policeman arrives and the snake charmer quickly flees the scene.

His brother, Birju Nath, says they are used to playing this game of hide and seek with the both the police and forest officials.

“They arrest us and take away our snakes. But if we stop doing this, what else is there for us?” Nath asks. “We have no business or land to fall back on. Without this we will simply starve to death.”

But the younger generation shows no interest in continuing the legacy. Youth, like 21-year-old Shankar, want to do something more attune to modern times.

Another member of the music troupe Vikrambir Nath, explains: “There are so many musical instruments out there but the Been stands out. It belongs exclusively to us and it is completely homemade. We make it with gourd and bamboo. It represents us as a community and our unique way of life and it is part of India’s cultural heritage. It needs to be preserved and that would require state patronage and promotion.”

Vikrambir Nath says unless the government invests in preserving the history and music of the snake charmers, within a few decades the centuries long practice will disappear without a trace.

And without cultural preservation, the very instrument with which they’ve plied their trade – the Been – could become extinct.