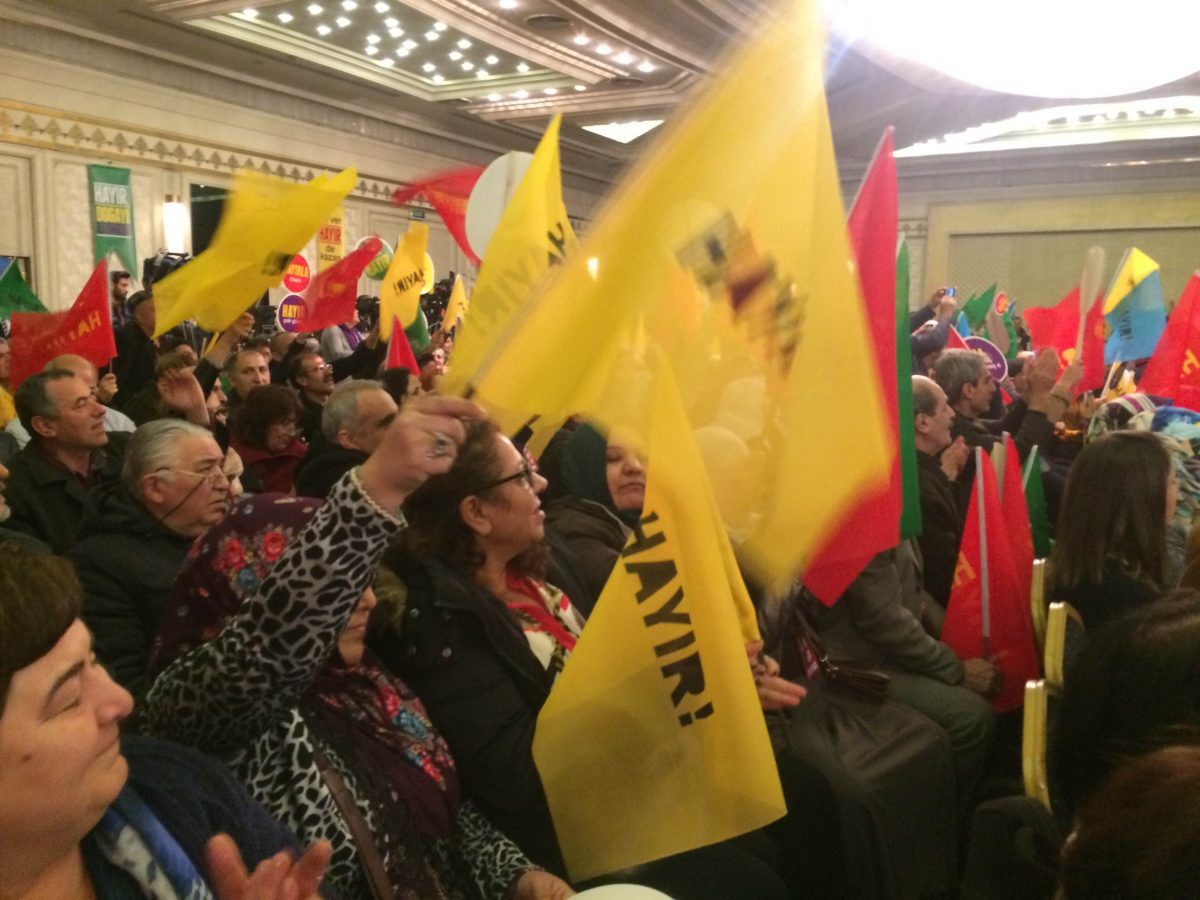 Supporters of the pro-Kurdish People's Democratic Party (HDP) rallying against the constitutional changes, part of their campaign before April 16. (Photo credit: Umar Farooq)

The government of Turkey carried out a fresh series of raids this week, arresting another 1000 people and purging the police force of more than 9000 officers allegedly connected to the US-based cleric who President Recip Tayyip Erdogan blames for last summer’s attempted coup.

The country remains under a state of emergency, extended after protesters took to the streets decrying what they say was fraud in the recent referendum. The plank of constitutional reforms that would grant President Erdogan much of the powers previously held by Parliament and the Judiciary officially passed with 51 percent of the vote, but opposition parties are contesting the results. Umar Farooq reports from Istanbul.

Every day since the referendum, thousands of people have taken part in protests like this one in Istanbul.

“We are protesting here today because there were some frauds,” explains an anonymous protester. “We noticed the – I don’t know how to translate it – election committee, let’s say, changed the rules while the voting was still going on, and we think these changes were just for the government – Erdogan’s government’s – profit.”

Scores of protesters have been detained, leaving some, like this man, too frightened to give their names. But they keep coming out each night because they are angry at Turkey’s Supreme Election Commission, which has refused to entertain allegations of fraud. The Commission’s decisions are final and cannot be appealed to any court.

Gürkan Özturan is part of Dokuz 8, one of several civil society groups that monitored the voting and collected evidence of electoral irregularities like ballot stuffing and the presence of armed men inside polling stations.

“Mostly these kinds of stories but also reports regarding unstamped ballots, the invalid ballots. They have been reporting throughout the day, starting from morning until evening, that people have been saying that on the envelopes, on the ballots, there were no official stamps making it a valid ballot,” says Özturan. “So this we have started seeing throughout the day, from very early hours.”

Opposition parties, as well as a team of monitors from the European Union, say both the campaigning and the vote itself were not free and fair. With the results, so close and the stakes so high, they are calling for a revote.

But Harun Armagan, a member of Erdogan’s Justice and Development Party, says the opposition is unhappy with the results and is trying to sidestep what was a historic moment for Turkey’s democracy: “When the result is very close – in terms of percentage, not in terms of numbers, because the numbers say 1.4 million difference between two votes – they just want to create an atmosphere to create a question for national and international bodies, that this result is not trustable [sic].”

Armagan says Turkish voters approved the constitutional reforms that consolidate power in the president’s office, so their demands can be more efficiently met by the government.

“This is about taking the country to a more democratic system and taking the country to a more efficient system, a more progressive system. Because we have seen the system that Turkey currently has was set up to dysfunction. It’s a very slow process, it’s taking a lot of time to make even simple decisions, and there are a lot of coalitions that don’t last long,” says Armagan. “And the president and prime minister usually are from different political opinions, which creates problems for Turkey. And we have seen that how Turkey can actually progress a lot when these are not the problems. We have experienced this personally, during AK Party time.”

The referendum ended up being not so much about the balance of powers in the country, but about the track record of Erdogan’s party. Since it came to power in 2002, Turkey’s GDP per capita has tripled, and many legal restrictions on overt religious practices, for instance wearing the headscarf in public schools, have been repealed. There was even a period where the government engaged in a peace process to end a three-decade old separatist Kurdish insurgency.

For many of Turkey’s conservatives, Erdogan is the man who can ensure those policies continue, even if that means he must be handed broad powers. As long as Erdogan keeps winning elections, Armagan says, he cannot be called a dictator.

But for activists like Özturan, the referendum, and Turkey’s struggle to become a true democracy holds an important lesson for the rest of the world.

“When democratic process is considered as a tool of the few, or a certain kind of ideology this, in time, tends to create an antithesis, an anti-system party decides to become more radical, and over time can become more popular among the society depending on the number of people who feel excluded from the system from the society and from the legal procedure,” Özturan explains. “If people feel their vote does not count, their rights cannot be sought through the legal procedure, then populist waves can come, and if the people feel the discomfort they will eventually slide towards more populist authoritarian figures which promise them leadership and comfort.”

Opposition parties have announced they will appeal the referendum results to the European Court of Human Rights. But there is little indication the government will reconsider the raft of constitutional amendments, which it says now has the public’s support.