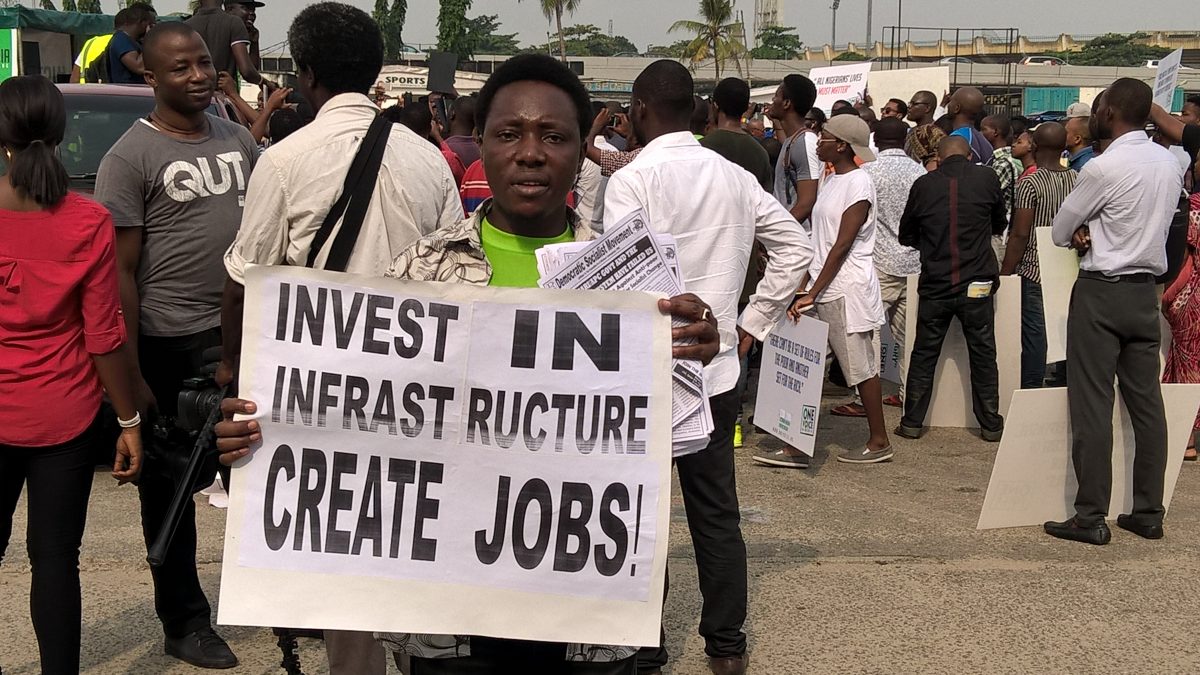 Nigerians want the government to curb corruption so there will be funds for infrastructures. (Photo credit: Sam Olukoya)

In Nigeria, millions of dollars of stolen public funds have been recovered in recent months, as President Muhammadu Buhari wages a war against corruption. Whistleblowers are playing a major role in the government’s anti-corruption drive. But exposing corruption can be at great cost in Nigeria, a country where corruption is deeply entrenched and impunity has been the norm. Whistleblowers, like journalists and anti-corruption activists, face threats including the risk of being assassinated for exposing corruption. Sam Olukoya reports from Lagos.

Street protests to call on the Nigerian government to combat corruption and provide basic public services like water infrastructure, electricity, roads and healthcare have become commonplace.

Infrastructure is often either lacking in Nigeria or poorly maintained due to widespread corruption like looting of the public coffers or cutting corners in the construction of public works projects.

The current president, Muhammadu Buhari, has been trying to make good on campaign promises to root out corruption and has thus far been successful in a number of high profile cases. Some of them involve billions of public dollars. In these investigations whistleblowers have played a key role, and some have paid a high price.

Olu Ibirogba said he was fired from his job as a school financial administrator and harassed after he brought forward allegations of corruption at his workplace.

“My office was sealed off; my official residence where I was staying was locked up. And I am being persecuted and I was remanded in prison custody for two weeks. Even the psychological trauma is there,” Ibirogba recalls. “I am suffering here in silence. Those who have done the right thing should not be made to look as if they have done the wrong thing.”

A crowd in Nigeria welcomed a former state governor after he served a jail term in Britain. This is the Nigerian irony. Many of those who steal public funds give part of the loot to people who become their loyal supporters. These supporters always stand by them, especially when they get into trouble with looted funds.

Most of those involved in high profile corruption cases are senior government officials. They’ve been known to use their positions to hunt down those who exposed them. Key witnesses in corruption cases have been harassed or even assassinated.

The same silencing tactics have also been deployed against journalists uncovering corruption. Stella Nwofia is with the International Press Center in Lagos.

Even members of parliament are not immune to  intimidation tactics. Abdulmumin Jibrin, a parliamentarian who accused some of his colleagues of corruption, was shouted down on the floor of the house mid last year. He was subsequently suspended from parliament and he had to flee Nigeria following death threats.

Many who were victimized on account of exposing corruption are not as powerful and have fewer recourses to fight back against retaliation.

Bamidele Ajinde, who lost his job after exposing corruption, says he is going through difficult times: “So, I have been jobless, my last son is at home now. I can’t send him to school. Even to eat now is extremely difficult. Even, I can’t perform my minimum responsibility as a father and a husband at home.”

“We do hope it will be enacted very soon because it is a major obstacle to our work. People are afraid that when they blow the whistle on corrupt acts, they will be victimized, their lives might be in danger. You will find that when you protect them, they know that they are protected, their families are protected they will come out more,” Okoduwa points out. “We still have people reporting now, but they are doing it under a lot of fear. We have people working in organizations, they report some people in that organization they are afraid for their lives, so we want that law to be enacted.”

The irony perhaps is that, while on the one hand, the government is fighting corruption, majority of the attacks on whistleblowers are being instigated or perpetrated by government officials who still want to remain corrupt in spite of the anti-corruption drive.

Which hand wins will come down to the force of political will.