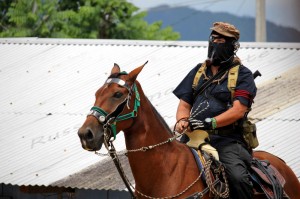 Subcomandante Insurgente Marcos rides horseback before Zapatista supporter in La Realidad during an homage to fallen compañero Galeano, killed in a paramilitary attack against Zapatista members on May 2, 2014. Thousands gathered in La Realidad to show their digna rabia – or dignified rage, and demand justice and an end to the on-going violence directed towards Zapatista indigenous communities in Chiapas. The May 2nd attack was the first such attack directly in a Zapatista Caracol – or Cultural Center of Resistance and Autonomous Governance. Subcomandante Insurgente Marcos made his final speech as spokesperson for the EZLN and announced that he was being relieved of duty, bringing an end to a character that had become, in his words, a “distraction” to the movement.