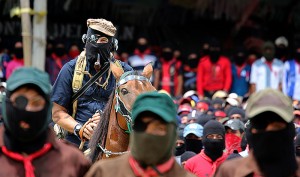 Subcomandante Insurgente Marcos stands before Zapatistas and supporters in La Realidad, where an homage was held to fallen compañero Galeano, killed there in a paramilitary attack against Zapatista members on May 2, 2014. Thousands gathered in La Realidad to show their digna rabia – or dignified rage, and demand justice and an end to the on-going violence directed towards Zapatista indigenous communities in Chiapas. The May 2nd attack was the first such attack directly in a Zapatista Caracol – or Cultural Center of Resistance and Autonomous Governance. Marcos made his final speech as spokesperson for the EZLN and announced that he was being relieved of duty, bringing an end a character that had become a “distraction” to the movement.