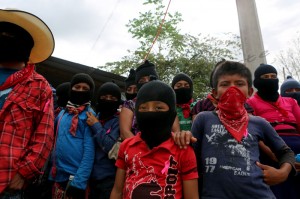 A group of young indigenous Zapatista boys wait in La Realidad during an homage to fallen compañero – Galeano, killed in a paramilitary attack against Zapatista members on May 2, 2014. Thousands Thousands of Zapatistas and their supporters gathered in La Realidad to show their digna rabia – or dignified rage, and demand justice and an end to the on-going violence directed towards Zapatista indigenous communities in Chiapas. The May 2nd attack was the first such attack directly in a Zapatista Caracol – or Cultural Center of Resistance and Autonomous Governance. Indigenous Tzeltal, Tzotzil, Tojolobal, Chol, Zoque, and Mam peoples form the majority of the Zapatista support base communities. Women and youth have been given many new roles in the civilian structure of the organization.