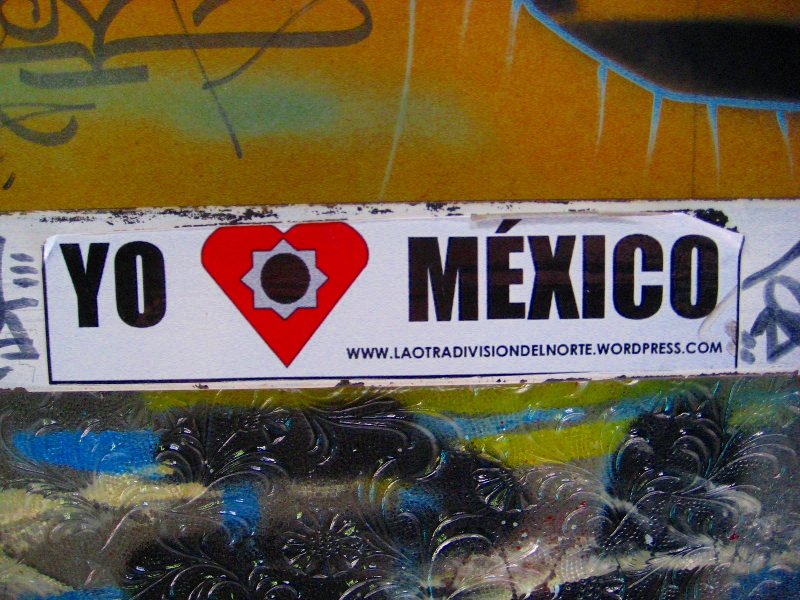 Sticker on a door in Ciudad Juárez (photo: Shannon Young)

In Mexico, a mass shooting this week near Ciudad Juárez was a grim reminder of the city’s recent reputation as the world’s murder capital. Ten people, including a child and several teens, were gunned down at a party in Loma Blanca following a local baseball game Sunday. The survivors and family members will join many of the city’s residents, especially children of murdered parents, who are coping with the effects of trauma without much official help from government programs. FSRN’s Shannon Young traveled to Ciudad Juárez and files this report.

The hustle and bustle of downtown Ciudad Juárez looks like an encouraging sign of recovery from a deep crisis of violence. The border city’s assembly plant industry is once again active, foreign investment is back, and homicide rates have declined.

But below the veneer of success, the city still struggles with the after-effects of a spike in violence attributed to the drug war. At its height, from late 2007 though 2011, more than ten thousand people were murdered in Ciudad Juárez alone.

VERONICA CASTILLO (in Spanish, female voiceover): “I think programs to treat symptoms are urgently needed. If adults are treated first, at least kids can have a shot at having adults around that aren’t so stressed out. Campaigns that truly treat the symptoms. The thing is, no one is talking about the symptoms or about what post-traumatic stress is. At most they’ll mention it as a possibility. NO, it’s a reality! And in a large part of the population. I don’t know anybody who hasn’t lost a relative or a friend. Everyone has lost someone.”

Castillo says children have suffered the most, but that the issue hasn’t been a priority of public policy or NGO attention. She says that children who have lost one or both parents to the violence have been particularly hard-hit and that ignoring the problem now can have serious future ramifications.

VERONICA CASTILLO: “The policy makers have no idea what the consequences will be. These kids are angry. You’ll ask them what they want to be when they grow up and while they won’t use the phrase “hired killer”, they will say ‘I’m going to be a bigger bad-ass than my Dad. They killed him, but they won’t kill me because I’ll be more bad-ass than he was’. And they’ll use those words. So, you see this drastic perspective in the life expectations of these kids. I don’t know what the government or NGOs are expecting to happen five years from now – in which time some of these kids will already be cannon fodder for the war which hasn’t ended.”

Castillo says the government has only made token efforts for political gain. When murder rates began to decline in Juárez, policy makers were quick to point to the statistics as a sign of success, but evidence of government programs to prevent future violence is hard to find. Churches, non-governmental organizations, and families struggle to fill the void.

Maria Elena Ramos runs an organization called “Compañeros”, which was initially founded to help people with HIV and AIDS. It’s since expanded services to counsel relatives of murder victims and mothers of missing women.

MARIA ELENA RAMOS (in Spanish, female voiceover): “It’s like we’re kicking while drowning – which is a very Mexican saying. We’re flailing to stay above water, but we’re unable to treat the situation with a holistic approach because it’s just SO serious and we don’t have the resources to handle it. We treat those who come to us, but there are a lot of people out there who are affected and unable to seek help.”

One of the problems is that victims’ relatives are often reluctant to come forward for fear of being stigmatized. During the height of the killings, the government itself suggested most victims were criminals, which painted families in a negative light.

Ramos voices optimism about the resilient character of Juárez residents and compares the current stage of the city’s recovery process to the way that individuals gather their bearings after an unexpected accident or random attack.

MARIA ELENA RAMOS: “It’s as if we were walking along the street and a rock suddenly hit us on the head and we didn’t even see where it came from. It hit us hard and disoriented us at first, but we were eventually able to react with the instinct to protect ourselves and to look for a way to resolve the situation.”

While the rapid surge in homicides in late 2007 took many in the city completely off-guard, some involved in hands-on community work had been warning that latent social issues and official negligence were creating deeply problematic conditions.

One of those raising red flags early on is Saint Teresa parish priest, Father Mario Manriquez. In 2006, he hired a firm to map the socioeconomic situation in his parish, while church volunteers carried out door to door surveys to document community challenges and needs. They identified issues like household-level substance abuse, domestic violence, children going unsupervised when long maquila shifts keep their parents at work, and lack of access to basic services like running water.  The results of the two studies helped the church formulate a social work strategy and establish community relations before the violence spiked.

(Park sound up, runs under narration)

Another parish project was the transformation of a large abandoned lot into what is now a well-maintained neighborhood park. At one end of the soccer field stands a vertical concrete slab covered in metal plaques with names engraved on them. It’s the only memorial in Ciudad Juárez dedicated to those who died in the most violent years of the so-called drug war.

Father Manriquez explained the purpose behind the modest memorial.

MARIO MANRIQUEZ (in Spanish, male voiceover): “The park is very nice, it’s serving its purpose, and that’s great… but what about those who have lost someone and are sad – don’t they have a place in the park as well? Are we supposed to celebrate and say “We now have a park and everything is beautiful” and pretend like we don’t care about those who died? No, we DO care. That’s why we created the memorial. It’s first and foremost an embrace of solidarity for those who lost their loved ones. But it’s also a lesson to remind us how far things went due to our lack of civic responsibility so that it doesn’t happen again.”

The memorial only has space for about 800 name plates, each one paid for by loved ones of the victims. While it’s not large enough to name the more than 10 thousand lives lost in Ciudad Juárez, it IS a tangible recognition of the collective trauma…and a lesson about the recent past.