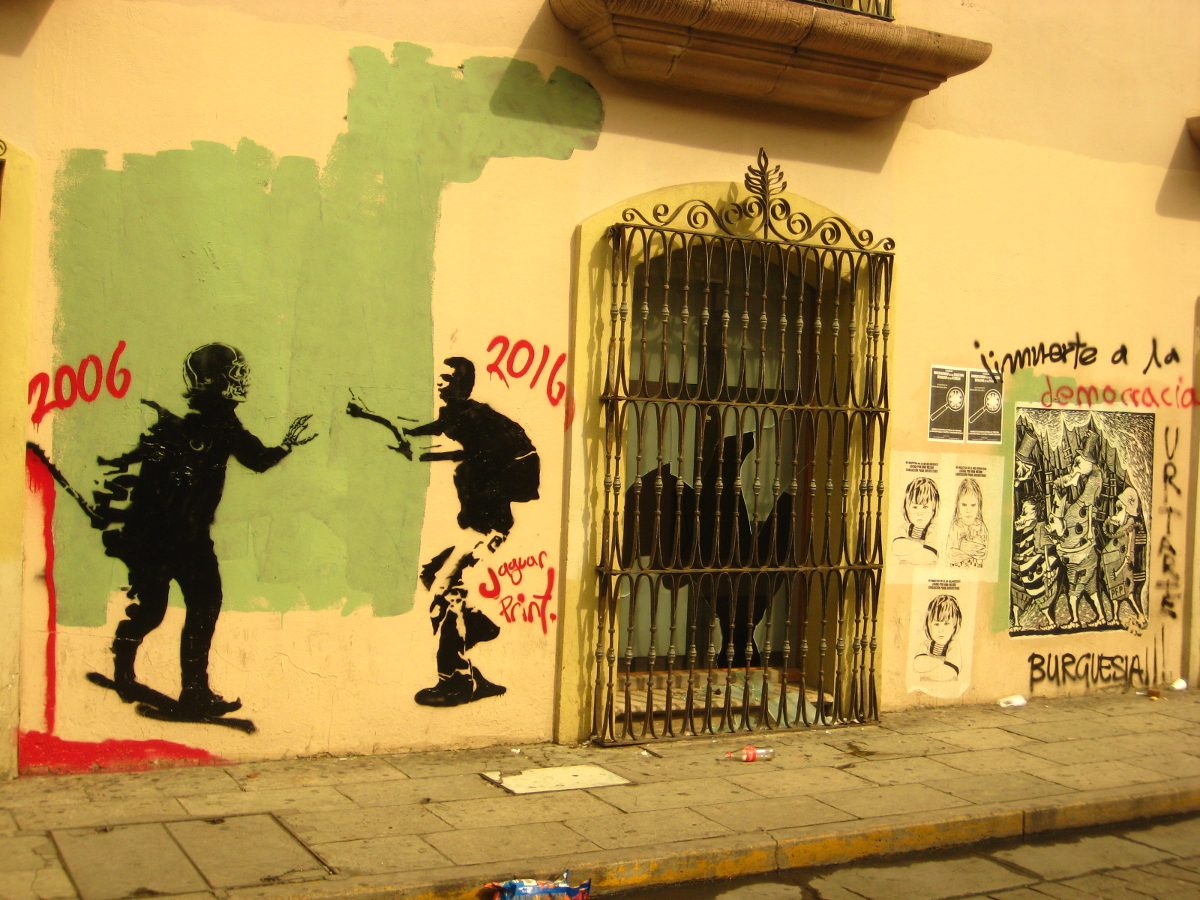 Protest graffiti on an outside the wall of the Museum of Oaxacan Painters. (Photo credit: Vladimir Flores)

Social tension reigns in the southern Mexican state of Oaxaca after federal police used deadly force against a protest in support of the state’s teachers’ union. Shannon Young has more from Oaxaca City.

At least six people are dead and more than 100 wounded following an intense day of clashes Sunday in the town of Nochixtlán, a hub in Oaxaca’s Mixtec region. Protesters had been blocking a highway there, and in other parts of the state, for several days in support of the state’s teachers’ union.

The teachers have been calling for dialogue with federal officials since mid-May, thus far without success. In the meantime, federal authorities have arrested the union’s top leadership. Sunday’s police action was reportedly intended to clear ongoing highway blockades, but escalated to include deadly force.

At first officials denied the police were armed. When photographs from national and international media emerged showing otherwise, officials dismissed them as fakes and not from the action at Nochixtlán. But by the time the Monday morning news cycle rolled around, Mexico’s federal police chief said the officers were responding to an ambush.

All of the dead were protesters or supporters. Authorities say half of the more than 100 wounded are police. Not much information has been made public about people reportedly arrested in Nochixtlán Sunday.

When the news of the highway confrontation in Nochixtlán reached Oaxaca City, located about an hour-and-a-half south, the state university radio station opened its phone lines to callers. After several hours, people identifying themselves as university students took over the broadcast facilities, much like what happened at the start of massive teacher-led protests in Oaxaca ten years ago.

As the day wore on and police approached, those in the radio station’s studio put out public calls for support at barricades inside the city limits and reinforcements at the protest encampment in the state capital’s main square.

The unifying theme among dissident teachers in the states of Oaxaca, Chiapas, Guerrero and Michoacan has been their opposition to a set of reforms that allows the federal government to weaken the power of their unions. These union chapters have long-standing sociopolitical ties to activist movements in their respective states and the crackdown on the labor group is likely to reverberate across their larger network of allied organizations.

For now, the mood in Oaxaca is tense, with many residents watching from the sidelines, hoping for a just de-escalation.