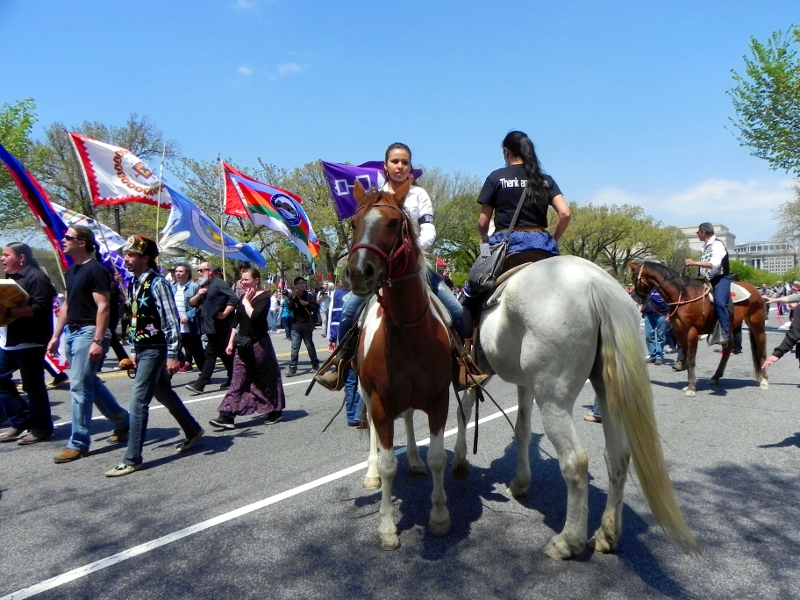 Young women on horseback lead the procession to the Museum of the American Indian and the US Capitol Building.

Thousands of people converged on Washington’s National Mall on Saturday to protest the proposed northern leg of the Keystone XL pipeline, which would carry tar sands oil from Alberta, Canada to refineries on the Gulf Coast. The action culminated a week of prayer and protest led by a group of indigenous activists and US landowners called the “Cowboy and Indian Alliance.” Our DC correspondent Alice Ollstein reports on how the diverse coalition is fighting in the courtroom and in the streets.

Tribal leaders in traditional dress led a march of several thousand people Saturday from their tipi encampment on the National Mall, past the government-run Museum of the American Indian and around the US Capitol Building. Some rode on horseback, some beat drums, and others carried a banner reading “President Obama: Protect our Sacred Water.”

Brian Brewer is President of the Oglala Sioux tribe in Pine Ridge, South Dakota. The reservation gets its drinking water from the Missouri River, which lies in the path of the proposed pipeline. Brewer says the State Department has never had a true “nation to nation” consultation with his people over the years it’s been considering TransCanada’s permit for the Keystone XL pipeline.

“They’re violating our treaty rights,” he points out. “We do have treaties that say they do have to get our permission to go through our lands, and they’re not!” Brewer thinks President Obama doesn’t want to sign the pipeline deal, but is under pressure. “But if it is signed,” he adds, “we’re going to step up and stop it with our blood. We’ll die before they put it in. That’s why we pray it does not happen.”

The so-called “Cowboy and Indian Alliance” formed last year between indigenous and non-indigenous communities whose lands lie in the proposed path of the Keystone XL pipeline. Brewer said though the two groups have historically and stereotypically been at war, it’s been a natural partnership, and a powerful one.

“They’re growing crops that feed the nation and the world,” said Brewer of the farmers and ranchers who would be affected by the pipeline. “You know, they want what’s best for the land also, because if there’s a spill it will hurt their livelihood. It’ll ruin the water the Ogallala Aquifer, and that’s our life, the water.” He added with an ironic laugh that Native Americans know al too well what farmers and ranchers are now facing with eminent domain. “They took our land away too!”

Tribal nations from across the US and Canada came to DC for a week of “Reject and Protect” actions, which included demonstrations outside the White House, the Environmental Protection Agency and the private home of Secretary of State John Kerry.

For many of them, like Eagle Clan member Kareen Roy from the White Earth reservation in Minnesota, it was their first time visiting the nation’s capital. “We already have seven pipelines going through Northern Minnesota – all through tribal land – and they want to put four more and they want to expand them,” she said.

Roy, whose Ojibwe name is Dancing Star Woman, says she came in solidarity with her Sioux relatives because she’s seen firsthand how fossil fuel projects can make life worse for native people: “It’s ridiculous because it’s not only killing our land, it’s killing our way of life. I’ve got uncles back home who feed their children and grandchildren from the rice they collect each year, and if a pipeline leaks — which statistically, it’s gonna — it’s gonna kill that.”

The self-identified cowboys in the Cowboy and Indian Alliance also expressed concern that the pipeline would permanently damage their livelihoods.

“We live there so that we can enjoy the good life Nebraska offers: peace and quiet and nobody bothers you,” said Mike Blocker from Antelope County, Nebraska. He raises horses and grows corn and beans on a piece of land that has been in his family for more than 60 years. “You have a little spot of land and this pipeline from a big foreign company is allowed to come in and tear it up, and risk an environmental catastrophe at the governor’s approval; it was just too much to sit back and let it happen.”

Statements by the Obama Administration earlier this year suggested that a decision on Keystone XL would come out this Spring. But that was before a court sided with Blocker and other landowners in Nebraska, and struck down as unconstitutional the pipeline route approved by the governor. The governor appealed that ruling to the Nebraska Supreme Court, and the Obama Administration announced this month that a federal decision on the pipeline would need to wait until those judges have their say later this year.