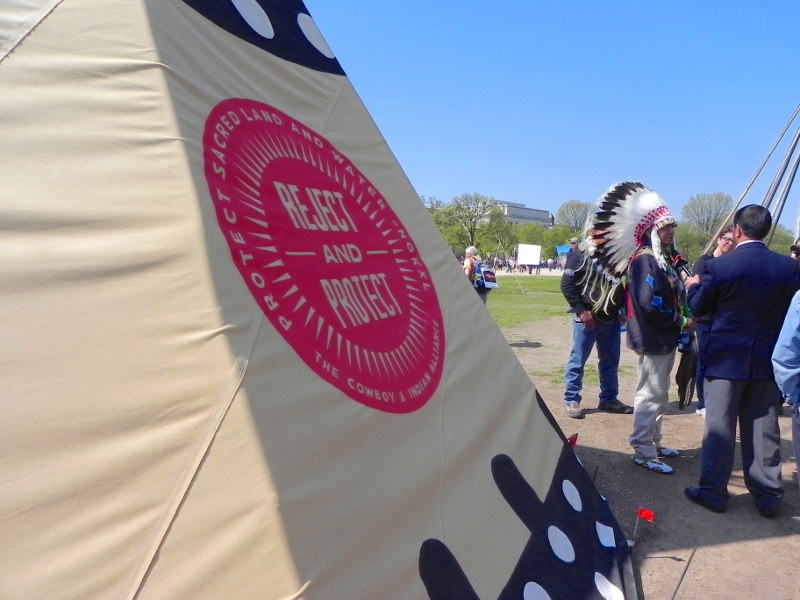 Tribal leaders give interviews beside their circle of tipis.

Native American communities along the length of the proposed path of the Keystone XL pipeline have opposed the project that would transport tar sands oil – or bitumen – from Alberta, Canada to Texas Gulf Coast refineries. In the final weeks of the lame duck Congressional session, the pipeline project made a surprise appearance on Capitol Hill and Lakota leaders compared the push to move it through to an act of war.

Shannon Young: In a recent column, just ahead of the Senate vote on the Keystone XL pipeline, you wrote “The Keystone XL Pipeline that is being pushed by TransCanada may well be the beginning of the final war between the United States government and the Indian Nations.” Why isn’t an issue with implications this serious even registering on the national media’s radar?

Tim Giago: Well, I’ve been involved in media for over 30 years and it seems to me that the only time that the media is interested in anything about Native Americans is if it’s something controversial or violent. That’s been my experience all of these years. I think there’s probably a complete lack of understanding of Native Americans. We’re sort of out of sight, out of mind and that’s where we are now.

I don’t think they understand there is a very serious group of Native Americans out here who will not ever allow a pipeline cross native lands… and they will lay down their lives to do it. And if that’s not an important story, I don’t know what the heck is.

Young: What’s at the heart of indigenous resistance to this pipeline project?

Giago: They are crossing lands that were signed into treaty for the Native Americans hundreds of years ago and they’re sacred lands. It’s like running a pipeline through Mecca and the Indians aren’t going to stand for it.

Young: Which tribes specifically are involved in pipeline opposition?

Giago: All of the Lakota, which would include the Standing Rock, Rosebud and Oglala Lakota. And of course there’s support from other tribes from Washington and other parts of the country also, Oklahoma.

Young: The Alberta Tar Sands, at one end of the proposed pipeline, is also in a heavily indigenous area. What’s the situation been there?

Giago: In Canada – it’s just not being reported either – but there is total objections by the Indians in Canada.

Young: Has there been any significant cross-border organizing between Indian Nations?

Giago: It’s in the process right now. We have groups now that are starting to organize. A lot of people are just finding out about it and I’m getting emails to that effect. The national media hasn’t put it front and center, so they don’t know about it.

Young: After the Keystone XL pipeline failed last week to secure enough votes in the Senate to move forward, Senate Majority Leader Mitch McConnell told the press the pipeline will be on the agenda early in the next Congress…

Giago: We definitely expect that to happen, but that will just sharpen the protests out here.

Young: Are people there already starting to plan to for this?

Giago: Oh yeah, there’s camps springing up around the Rosebud. There’s groups on the Pine Ridge Reservation organizing. It’s gonna be a huge protest. It’s not just going to be a handful of people out here, it’s going to be several hundred.

Young: Tim Giago, anything else you’d like to add on this issue?

Giago: Well, I think the one point is that the Republican Party or the national news media just do not understand the seriousness that is applied to it by the Indian people.

Tim Giago is the publisher of Native Sun News and founder of the Native American Journalists Association. He spoke with Shannon Young by phone from Rapid City, South Dakota.