Street Beat: Voices from the Berkeley “I can’t breathe” protests 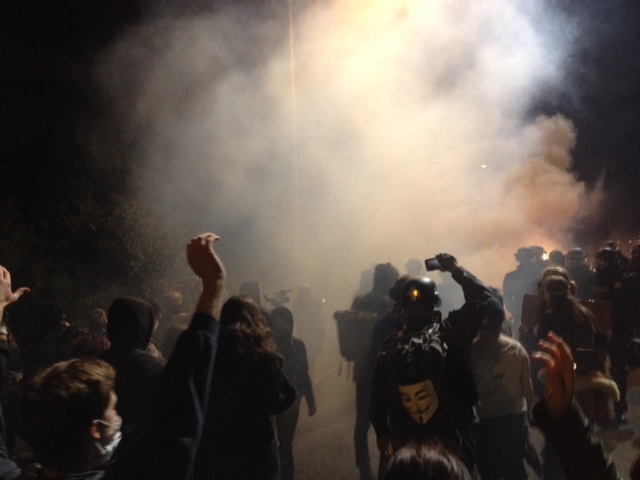 Over the weekend, nationwide protests continued in reaction to a Staten Island grand jury decision not to bring charges against the NYPD officer who killed Eric Garner by putting him in a banned chokehold. In New York, demonstrators marched through department stores and staged a die-in in Grand Central Station. In Chicago, pastors led their congregations into the streets for traffic-stopping protests during religious services. Protests in Berkeley turned tense over the weekend when police used tear gas and smoke bombs and a small contingent broke off from the otherwise peaceful group to smash windows at several banks, loot a local Whole Foods and scatter burning garbage in the roads for makeshift barricades. FSRN’s Andrew Klein spoke with a number of protesters in Berkeley and files this Street Beat report.

Mark Loafs, educator and activist: “I turned out because—lynching in this country of black people, of the institutionalized raping of our culture, the systematic discrimination, the legacy that continues. And I’m trying to get these youth to empower themselves for the new generation, because they’re going to be the voice to change this.”

Adam Kittler, local rap artist: “My name is Adam K., AKA Absoluther. I’m a rapper. I’m an artist. I’m out here in these protests because I have been, you know, held down on the street in a stranglehold. I’m here at these rallies because I have had a gun pointed at me at multiple times in my life from the ages of 11 to 27, which is the age that I am right now. I could have been shot. I could have been killed multiple times by police, in the same situations—I have been in the same situations as Oscar Grant. I’ve been there, you know what I mean? I’ve been in the same situations where, like, the police say “Guns on you! Get against the wall!” And they put you in handcuffs.

Quincy Carr, activist from Oakland, CA: “We’re here against police brutality. This is a police state. And, at least for me, I’m against the militarization of the police. Again, they bought drones, tanks, armored vehicles. They are getting ready for the next American civil war, and it stops today.”

Dr. Brandie Cross, owner of the Pot Lab California: “My name is Dr. Brandie Cross. I am the owner of the Pot Lab California and I am here to protect all of these civilians from tear gas, as they used yesterday to break up this peaceful protest. I think it’s wrong that young people are being exposed to very toxic chemicals, like tear gas, which are illegal to use on citizens anyways.  I think that it happened here because lately the police have been getting away with murder, and if they can get away with murder, they can get away with tear-gassing hundreds of Berkeley students. And that’s their attitude, so we’re here tonight to show that we’re not scared of their chemicals.”

Yvette Felarca, organizer with the Coalition to Defend Affirmative Action, Integration, and Immigrant Rights and Fight for Equality By Any Means Necessary: “This is just a continuation of their policies of trying to get away with their right to continue to use their badges as a license to kill and use their badges as a license to take away our rights to protest and demand justice. We’re not going to let that happen. So we’re staying united. We’re going to continue to fight. We’re not going to let them bully us. We’re going to make clear: these streets are our streets. They’re not the cops’ streets. We’re the community that got the first cop in California charged with murder and convicted for killing a black person. We stand on that. We’re going to build from it.”

Those were the voices of Mark Loafs, an educator and activist; Adam Kittler, a local rap artist; Quincy Carr, an activist from Oakland; Dr. Brandie Cross, owner of the Pot Lab California; and Yvette Felarca, an organizer with the Coalition to Defend Affirmative Action, Integration, and Immigrant Rights and Fight for Equality By Any Means Necessary.