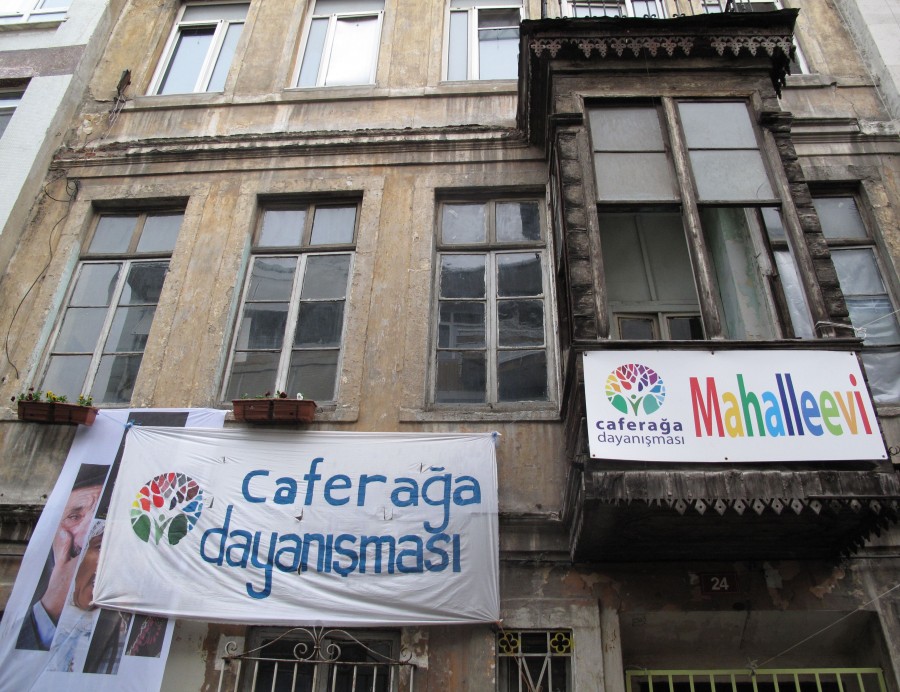 Istanbul police made good on their threat Tuesday to raid and shut down one of Turkey’s few community center squats. A handful of communal squats emerged from last year’s Gezi Park movement as activists moved from the streets and into abandoned properties. Jacob Resneck reports from Istanbul.

Protesters beat pans and drums in anger after a pre-dawn raid by police shuttered a community center founded in January in central Istanbul.

Locals jeered at riot police who stood by to prevent them from re-entering the building that was sealed after a raid wrecked the center’s makeshift cafe and gallery.

Activists said the Caferaga Communal Center was worth fighting for because it was one of the city’s few non-commercial indoor spaces where people could gather and exchange ideas.

“It’s like a public space and in Turkey we don’t any public spaces and we don’t give it away just like that,” said 22-year-old student Melis Ozbakir.

Fellow activist Baris Yildirim, 36, said the squat – which served as a meeting place and exhibition hall but had no residents – converted a dilapidated building into a neighborhood benefit.

“Since this building was out of use for 20 or 30 years and the state didn’t do anything with it and since we are using it as a real community center,” Yildirim said. “With its library, its darkroom, its carpentry, different workshops on different subjects we believe that it’s a necessity for the community and want to preserve it.”

In the wake of last year’s Gezi Park protests which saw a mass uprising against government plans to demolish a central green space for a private shopping mall, activists had begun holding meetings in parks across the country.

When the weather turned cold, some buildings became occupied. This squat is the second of its kind in Istanbul. Solar panels on the roof kept the lights on as organizers were intent not to break any laws – aside from trespassing.

A new law that ended rent control in July has priced many locally-owned shops out of their longtime locations in central Istanbul which is erasing local character.

“There’s a rapid urban transformation and the rents are going up very rapidly,” Yildirim said. “So we think that… in case we didn’t occupy this place it would probably turn into a boutique hotel or a luxury café.”

Protesters have vowed to reclaim more territories and it’s unclear what the fate of the Caferaga Communal House will be now that police have sealed the doors and windows.

But with public space in short supply and a committed core of activists intent on re-purposing some of the hundreds of properties that lie vacant it seems further confrontation between squatting activists and police is all but inevitable.