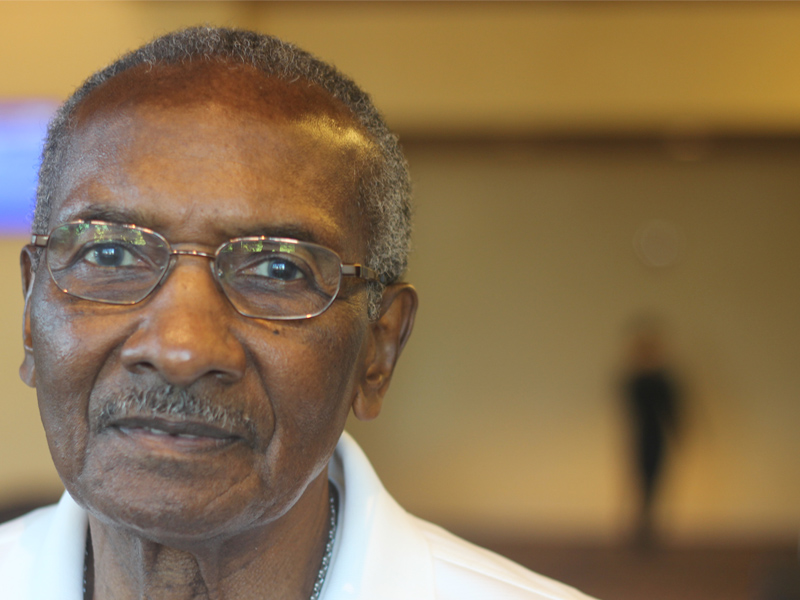 Former SNCC and Black Panther organizer Hank Jones was invited to share his experiences of protesting in the 1960s at the UCLA conference. The military veteran says the murder of Emmett Till impacted his activism.

Tens of thousands of people converged on the city of Selma, Alabama over the weekend to commemorate the 50th anniversary of a march for voting rights that was a milestone of the Civil Rights Movement. The March 7, 1965 voting rights demonstration made international headlines after Alabama state troopers attacked civil rights activists at a bridge in Selma which still bears the name of a Confederate general and ranking member of the KKK.

Also this weekend, friends and family of Tony Robinson mourned the death of the 19 year-old who was shot dead by a police officer in Madison, Wisconsin. High school students staged walkouts today and marched to the Wisconsin state capitol building in protest. Robinson is the latest unarmed black teen killed by a white police officer since the shooting death of 18 year-old Michael Brown in Ferguson, Missouri sparked a nationwide movement under the banner, “Black Lives Matter.”

Activists for police accountability continue to diligently organize, including in quieter settings, like conferences and workshops. FSRN’s Lena Nozizwe reports on one such gathering over the weekend at UCLA which brought together academics, activists and artists from around the country to focus on the history of systematic racism and examine new ways to fight it.

The conference at UCLA entitled Possessive Investments: Systems of Power, Possibilities of Dissent, brought together speakers from around the country to talk about past systemic racism. But as timing would have it, they had plenty to discuss about present-day institutional bias.

Just days ahead of the forum, the Department of Justice released a scathing 105-page report on racism within the police department and municipal court system in Ferguson, Missouri. “For a lot of us, a lot of people who have been organizing, it is exactly what we already knew,” said UCLA graduate student and local Black Lives Matter organizer Shamell Bell. “But sometimes people need statistics, sometimes they need data. So, I think that also points to the role of academics and the role of conferences of people bringing that information. It’s about educating people.”

Long before Michael Brown’s death, the black residents of Ferguson had been complaining that biased policing was engineered to generate revenue rather than to protect and serve.

According to the DOJ report, fees and fines make up the second-largest source of municipal revenue for the city. The average household in Ferguson, a city whose population is 67 percent black, was billed more than 300 dollars last year based on what has amounted to policing for profit.

Destin Jenkins, a Ph.D. candidate in history at Stanford University, says the push to ticket – combined with racially-biased law enforcement – constitutes a de-facto form of targeted taxation. “For us to think about reforming police departments and the municipal state in general we have to engage with questions of taxation and municipal finances,” he told FSRN. “As boring as it is, it is the key battleground.”

Reforming municipal finances was one of many strategies presented as ways to keep the movement alive past the moment of protests.

Shamell Bell says expressions of dissent can take on multiple forms: “We need a united front. We need a solidarity and in order to do that I am going to as many events as I can and putting on as many events as I can so we can continue to have these radical dialogues, because we, inside of us, already have the answers to liberation.” The World Arts and Cultures Dance graduate student was one of a group of activist artists to demonstrate her moves.

At the closing session of the event, organizers from Black Lives Matter prompted conference-goers to honor black men and women recently killed by violence, including police killings.

Anniversaries of important moments in the Civil Rights Movement have also served to highlight the importance of connecting historical struggles to their present-day context.

Military veteran and former Black Panther member Hank Jones says an event that inspired his own activism was the 1955 lynching of Emmett Till. Fourteen-year-old Till was tortured and murdered for allegedly flirting with a white woman. Jones remembers how Till’s mother “was wise enough to have an open casket to show that they had brutally tortured and disfigured her son and he was just 14 and so it outraged not just the country but the world.”

Two white men admitted to murdering Till only after a jury voted to acquit them after only 67 minutes of deliberation. The acquittal shielded the pair from facing the same charges a second time.

Jones will turn 80 this year and he says he’s lived long enough to see history repeat itself. He does, however, sound wistful when contemplating the real-time organizing potential of modern-day tools like social media: “I think now if we had had the kind of ability to communicate like they do today, instantaneous transference of information, there is no telling what we could have accomplished.”

Even with the speed of present-day communications, Black Lives Matter activists are mindful of the context of the past struggles to give power to future organizing. Jones hopes that today’s protesters will take the time to study the history of his generation of activists and learn from the mistakes and successes.

The organizers pushing the movement forward are looking past tweeted hashtags to seek out activists who are in it for the long haul – on and off line.