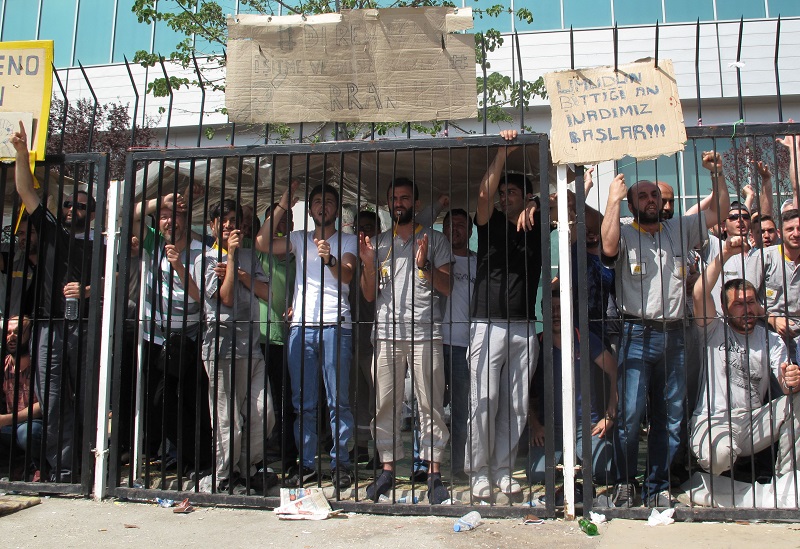 Hundreds of auto workers at a Renault plant in the Turkish city of Bursa have barricaded themselves behind locked gates in a wildcat strike over pay and working conditions. May 25, 2015 (Photo Credit: Jacob Resneck/FSRN)

Wildcat strikes by auto workers at plants across Turkey are paralyzing production for European car makers. The actions now ongoing against multiple manufacturers began May 14 in the industrial city of Bursa. Workers at a Renault plant defied their own union and occupied their factory where nearly two weeks later they remain dug in. FSRN’s Jacob Resneck from Bursa.

Thousands of auto workers chant resistance slogans in front of the iron gates of an idle Renault plant. Hundreds of their colleagues remain barricaded behind the bars in a show down over better pay and conditions.

In defiance of their own labor union, nearly two weeks ago workers laid down their tools after learning that employees at another plant had received a substantial pay increase despite stagnant wages throughout the sector.

“The thing is that the union here it’s not really trying to fight for the interests of the workers,” local activist Ugur Kurt says, explaining that tension has long simmered between auto workers and their management-friendly union. “They are much more with the management of Renault and they do not respect the needs or the demands of the workers.”

Things came to a head May 14th after an entire shift voted to lock themselves in. Many of their colleagues have since camped out on the front lawn and day-to-day decisions and negotiations are directed by worker-led strike committees. The labor union has been notably absent the entire time.

“It’s a very important experience, it’s an experience of direct democracy,” Kurt says. “Workers they take all their decisions together, it’s a good democracy experience.”

Morale remains high as thousands of workers parade and sing as if at a soccer match. But there is also an emotional toll for those behind the gates.

Auto worker Hasan is living off food and water brought by friends and family, and has been for nearly two weeks. But he says he learned early on that it was better that his children stop visiting the plant.

“My own child visited and she wouldn’t look me in the face,” the 25-year-old striking father recalls. “I asked what’s wrong and she asked what I had done wrong to be in this situation. So you cannot even let your children come here.

Workers here earn on average about $570 a month and complain that inflation is creeping up yet wages remain stagnant. Negotiations are ongoing to address that. In fact, workers here say they were close to a deal with Renault but the agreement was scuttled at the last minute by the employers’ associations apparently fearful that concessions would create a domino effect of higher wages across the sector.

Past unauthorized strikes have been met by police crackdowns and attacks by armed gangs workers claim were directed by their own union. But so far there’s been no violence here.

In less than two weeks Turkey’s business-friendly AK Party faces one of its toughest electoral challenges after more than a dozen years in power. Many of these workers had been government supporters. 48-year-old mechanic Murat has worked at the plant for 25 years and says the conservative AK Party was once popular here. But that’s changing.

“The AK Party certainly got most of the vote from workers,” Murant says. “It’s been the party getting the most votes for more than 10 years now, despite the fact that it’s doing less and less for workers.”

Strikes have now spread to others manufacturers and plants elsewhere. Workers seeking better pay shut down a Ford motor plant in the city Eskisehir. A number of auto parts suppliers have closed as well. The government warns of economic consequences and negotiations are continuing.

Workers here in Bursa have already rejected a one-off payment of about $380 dollars to go back to work and they say they’re holding out for guarantees that there won’t be retaliatory firings for striking workers.

Cemalettin Kani Torun, head of local branch of the ruling AK Party, denies that police are being restrained because of political sensitivity.

“Turkey is a nation of laws, my friends” Torun tells reporters. “Everything is being done according to the law. Whatever is forbidden the workers will find out. If the employees have broken the law then the courts, the prosecutors will make this clear. Once this decision has been made they will act accordingly.”

Meanwhile, at this plant that usually rolls out 1,200 vehicles a day the assembly line remains quiet — even if workers outside aren’t. Employees say they intend to keep up the pressure to win concessions and it appears that thousands of auto workers across Turkey are digging in for a head-on confrontation with their bosses, their government and their union.

Logistical support for this report was provided by Platform for Independent Journalism (P24),an Istanbul-based non-partisan association whose stated mission is to assist in independent reporting in Turkey.