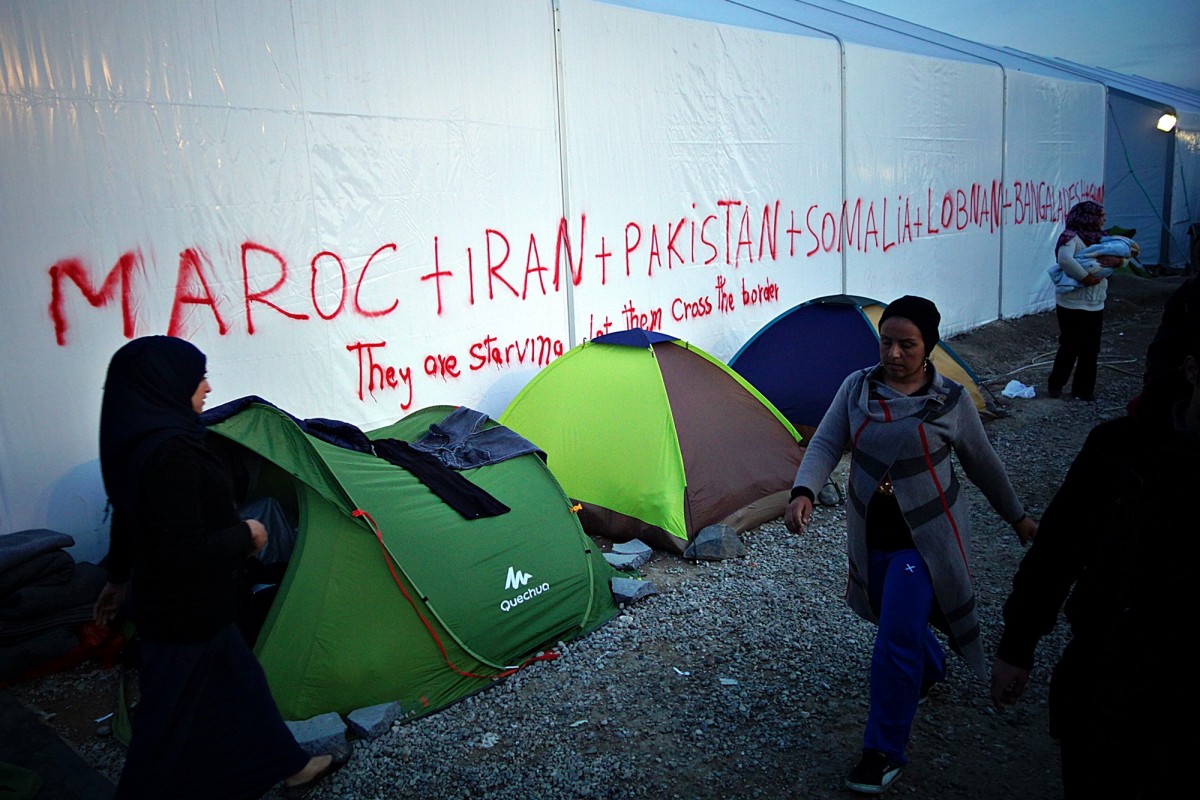 A refugee camp in Idomeni, Greece. The graffiti reads: “They are starving, let them cross the border.” (Photo credit: Filip Warwick)

The EU and Turkey all but sealed a controversial deal Friday aimed to curb the flow of migrants into the European Union. Under the agreement,  all migrants arriving on Greek shores will be returned to Turkish soil. For each person sent back, the EU will resettle one migrant already in Turkey – but only Syrians, and anyone who attempted the maritime crossing will be barred from the resettlement program. The deal is capped at 72 thousand resettled Syrians.

In return Turkey is getting more than $6 billion over two years. Human Rights groups are raising alarms and aid agencies say collective expulsions and blanket rejection of asylum claims are  illegal and wrong. Borders along the Balkan route are already effectively closed, creating a backlog of tens of thousands of refugees stranded in cash-strapped Greece. FSRN’s Jacob Resneck reports.

There are still some 12,000 people here waiting to cross at the Greek border village of Idomeni. Days have been turning to weeks as entire families – mostly from Syria and Iraq – demonstrate in front of a line of Greek riot police standing between the migrants and Macedonia.

Much of the talk around the camp is what will be the outcome of this week’s EU meeting with Turkey.

Nobody wants to go back to Turkey.

“The first thing we are looking for is safety,” said 22-year-old Mahmoud from Damascus. He shows a gash on his head he says he received in a beating by the Turkish coast guard which caught his group trying to cross the sea. “Then comes the education, the work, everything else. You know, the first thing that a human being is looking for, anywhere on the earth is safety. If there’s no safety you can’t do anything.”

The only Greek government presence here is the police. That’s because the government wants people to leave the border areas and relocate to new camps it’s rapidly building with European money to add about 50,000 beds.

Aid workers are doing their best to prevent an even worse humanitarian crisis as wet, cold weather and poor sanitation make people sick while they wait in vain for the border gates to reopen.

Jean-Nicolas Dangelser of Doctors Without Borders says there were also a lot of Afghans, but they were rounded up by police. He says the nationality-based discrimination just pushes people into the arms of smugglers.

“We have a lot of Pakistanis, Afghanis, Moroccans, every time they are closing the border for a nationality, we will see them around, not so much in the official camp,” Dangelser said. “But we can see them all around hiding in the bush.”

And the veteran aid workers are dismayed by European leaders who he says underestimate the determination of people who have already risked their lives to flee dangerous countries.

The reasoning behind the EU-Turkey scheme is confusing. It would allow the EU to return all refugees and migrants showing up in Greece to Turkey. But for each of these migrants deported, Turkey would send one Syrian refugee to Europe.

But that means in order for Syrian refugees to be allowed into Europe from Turkey, refugees will still have to keep risking their lives on small boats to make it to Greece and keep the swaps going.

“Will European public opinion tolerate the sight of women and children being forcibly sent back to Turkey?” The Council of Europe’s Human Rights Commissioner Nils Muiznieks told FSRN in an interview.

He says the scheme fails a basic test of European law.

“Every person seeking protection has the right to have his case examined on a case-by-case basis on the individual merits,” Muznieks said by telephone in Strasbourg, France. “This deal does not foresee that. It foresees summary expulsions of people.”

At Idomeni, the suffering at Idomeni continues. Dalal, a mother of two from Latakia, is appealing to a line of police officers who have been watching the crowd impassively.

In Syria, Dalal was a nurse in a hospital. But when her husband was killed in the war, she decided to go. She says she has a bad kidney and needs medical treatment.

“I came from Turkey by boat and we are suffering here,” she says in English. “We are only asking to open the border.”

Europe’s political leaders continue to watch the polls nervously as anti-immigrant parties make electoral gains. And so there’s pressure for some sort of breakthrough with Turkey that would allow authorities to start sending people back. No matter what the human cost.