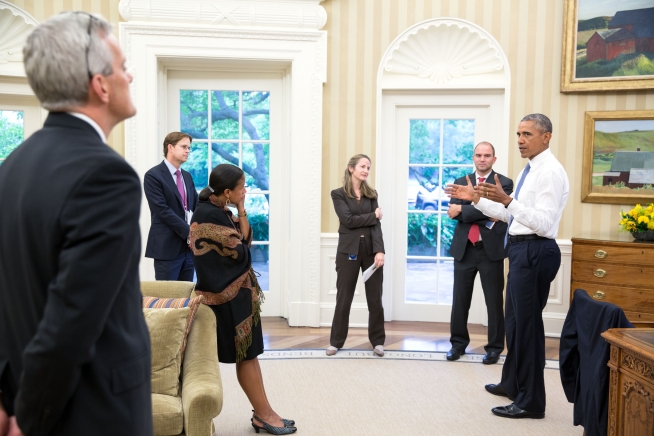 President Barack Obama talks with national security staff in the Oval Office after being notified of the nuclear agreement with Iran, July 13, 2015. (Official White House Photo by Pete Souza)

A long-anticipated draft agreement of a nuclear disarmament deal with Iran has been reached as a result of international negotiations brokered by the five veto-holding members of the United Nations Security Council and Germany; the so-called P5+1 group of countries. Shannon Young has more.

After 23 months of intense negotiations and extended deadlines, the so-called P5 plus one group of countries announced Tuesday it had finally reached a deal with Iran about its nuclear program.

“This deal meets every single one of the bottom lines that we established when we achieved a framework earlier this Spring,” said President Barack Obama shortly after the breakthrough in Vienna. “Every pathway to a nuclear weapon is cut off and the inspection and transparency regime necessary to verify that objective will be put in place.”

The deal will ostensibly end Iran’s ability to produce enriched uranium, shut down the vast majority of the country’s nuclear centrifuges and establish an inspections regime. The US and the United Nations will reward compliance with the lifting of sanctions.

The president vowed to brief Congress on the details of the deal, but warned his veto pen is at the ready if partisan politics threaten to derail it.

“I am confident that this deal will meet the national security interests of the United States and our allies, so I will veto any legislation that prevents the successful implementation of this deal,” said Obama in his address. “We do not have to accept an inevitable spiral into conflict and we certainly shouldn’t seek it. And precisely because the stakes are so high, this is not the time for politics or posturing.”

News of the deal broke just hours before a scheduled hearing on the nuclear negotiations of the House Foreign Affairs Committee. Some members of Congress openly condemned the negotiations and echoed the reaction of Israeli Prime Minister Benjamin Netanyahu that the deal is a “historic mistake.”

At least one former official called to testify took a different approach.

“I’m convinced we’ve got to try this first and we’ve got to be vigorous in trying to implement it,” said Nicolas Burns, who served as Undersecretary of State for Political Affairs during the administration of former president George W. Bush. “And if it works, we’re ahead of the game. If it doesn’t work, we’ve got other options.”

While Burns says the deal could go either way, he pointed to North Korea as an example of what could happen if leaders don’t seize the opportunity: “Once North Norea obtained nuclear weapons, it’s become almost impossible to negotiate with them because they’ve got the leverage right now. And, of course, they’ve got some protection from China as well. So, I think that both President Bush and President Obama have been right to try to go at this in a more direct way and try to stop – through negotiations – the Iranians before they cross the nuclear threshold. What President Obama has been able to do, in my judgement, is buy is ten years.”

One mechanism that Congress will want assurances about is the ability to resume sanctions in the event of non-compliance.

The coercive effects of that economic pressure – both as punishment and as an incentive – were evident when Iranian president Hassan Rouhani addressed the deal in a speech to the people of Iran.

“When we started the negotiations, we had an inflation rate above 40 percent and our economic growth rate was -6.8 percent,” said Rouhani in an address broadcast by Press TV. “But, in the course of negotiations by improving our economic condition, we managed to contain inflation and we came up with a positive economic growth. And this was the strongest message sent by us to the P5+1 group of countries.”

The U.S. Congress now has 60 days to weigh in on the Iran nuclear disarmament deal.