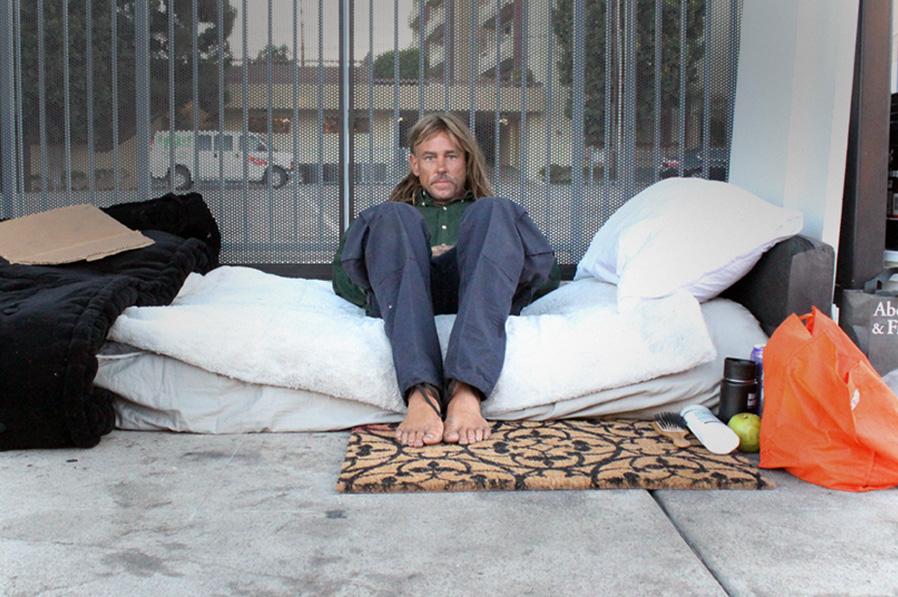 The homeless population of Los Angeles, California has swelled by 12 percent to 26,000 over the past two years. That’s according to data from the Los Angeles Homeless Services Authority. Limited space in shelters means that thousands of homeless men, women and children have limited options, including living in cars, parks and in the streets. The homeless population increase has coincided with the Los Angeles City Council’s approval of ordinances last month that make it easier to confiscate so called bulky property like bedding and tents from homeless people—as well as personal items. FSRN’s Lena Nozizwe reports that under the new laws mean making a home in the street is very much a matter of what is here today may well be gone tomorrow.

While his bed may not look like much to the strangers who walk by his makeshift home in a comfortable Los Angeles neighborhood wedged between Beverly Hills and West Hollywood —  Mr. Wilkerson, as he asked to be called – says it’s a blessing.

“To me it’s a really nice bed considering on the street other guys are laying on the hard surface concrete,” Wilkerson notes.

Just how long Mr. Wilkerson will be able to hold on to that bed and his other possessions is in question now, due to new ordinances passed by the Los Angeles City Council. They make it easier to confiscate and even destroy the belongings of the city’s growing homeless population.

Data compiled by the Los Angeles Homeless Services Authority indicates homeless encampments of one or more persons have increased by 85 percent in the last two years. And they have proliferated throughout the city.

The new laws allow police to summarily seize and destroy large items such as tents, couches and beds from homeless people in the streets and parks of Los Angeles. Seizure of smaller items would require 24 hour notice. Those who break the law could be face a ticket or misdemeanor charge.

A man who gave his name as Dice says seizing what few possessions homeless people own is unfair and will lead to problems, including violence.

“The only thing it’s going to do is get a whole lot of people hot and somebody going to get killed again for messing  with our stuff,” said Dice. “You got to remember that it’s our stuff and they don’t have a right to confiscate it.”

Dice recalled the case of Africa, a homeless man killed by Los Angeles Police earlier this year, as an example of what could go wrong. Dice lives on Skid Row, a community in downtown Los Angeles that has the highest concentration of homeless men, women and children in the United States.

“At some point, and this is the point that I suggest, we just have to change our direction and policies towards poor people and the homeless in the city,” said  City Councilman Gil Cedillo during the city council meeting last month to vote on the new ordinances. “We can no longer continue to criminalize them. We should have a war on poverty and not a war on the poor.”

Councilman Cedillo says the city already has its hands full when it comes to seizing and storing the possessions of LA’s homeless population. He says the city’s strategy is not working.

Cedillo was the only councilperson to vote against the crackdown.

“Now I am very sensitive to the need to protect the constitutional rights of the homeless, but I also believe in the importance of public spaces,” remarked Councilman Joe Buscaino, who voted with the majority. “That public spaces are public and we should not allow any personal property to be stored in areas that should be clean, accessible, open to everyone.”

Back on the street, Mr. Wilkerson, who has lived without a home in Los Angeles for two years, says he does not cause any trouble and that he does his best to keep his encampment – and the street around it – clean.

“What’s the reasoning or the input behind why they would want to just want to take people’s belongings?” he asked. “I would be pretty devastated.”

The Los Angeles Homeless Services Authority reports there are about 4700 emergency shelter beds that are designated for the city’s homeless population of 26,000. And LAHSA says of the facilities they track there is an occupancy rate of almost 80 percent.

An additional 26-hundred beds are available at privately operated shelters that frequently operate close to – or at – capacity.