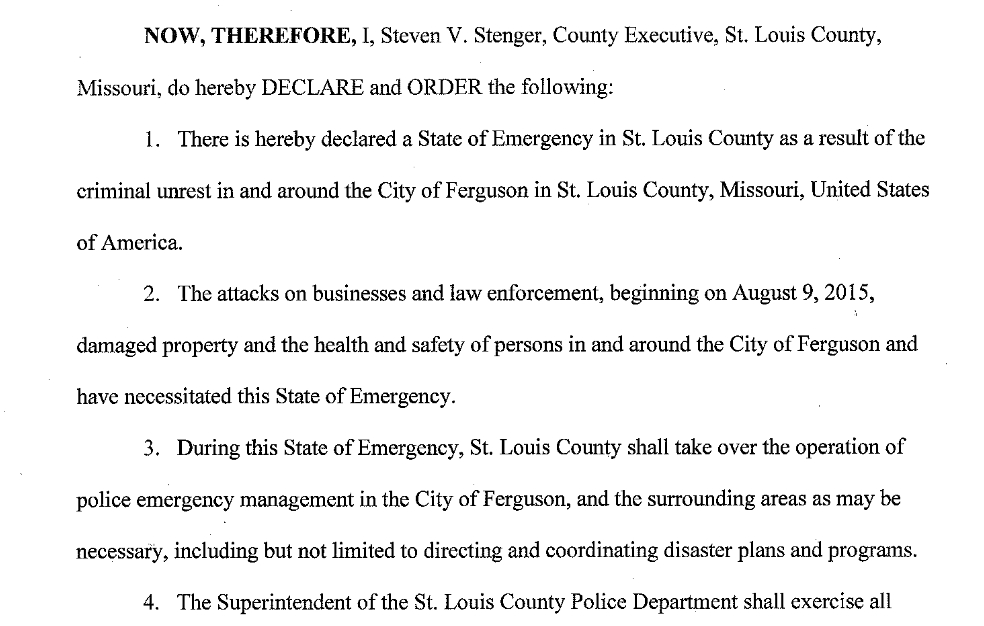 Excerpt of the Aug. 10, 2015 executive order declaring a state of emergency in St. Louis County.

Just one day after demonstrators marked the one-year anniversary of the fatal shooting of 18-year-old Mike Brown by then-officer Darren Wilson, St. Louis County – which includes the town of Ferguson, Missouri – is once again under a state of emergency.  News of the order broke shortly after gunfire night and the arrests Monday several high-profile activists were arrested during a civil disobedience action outside of the St. Louis office of the Department of Justice. FSRN’s Lena Nozizwe has more.

St. Louis County Police Chief Jon Belmar said that Sunday night, plainclothes officers were following the 18-year-old African-American man, who they thought was armed. According to police, Harris shot at the plainclothes officers, who then returned fire. On Monday prosecutors charged him with ten counts, including assaulting an officer.

The incident occurred as hundreds of protesters observed the one-year anniversary of the shooting death of Michael Brown by former Ferguson police officer Darren Wilson.

St. Louis resident Molly Greider was on her way home from the protest when she heard a series of gunshots.

“Since I was in my car when I heard it, I rolled up my windows,” said Greider, noting that she heard multiple shots. “Things had been pretty calm when I had left the first time and so I heard the gunshots and sort of thought that it was unrelated because generally it is unrelated to the protests that are going on.”

Greider, who has protested frequently for months now says did not recognize Harris, adding that a number of unfamiliar faces were in the crowd Sunday night.

In his emergency order, County Executive Stenger cited “criminal unrest.” Just before the declaration, police arrested dozens of activists during a nonviolent Moral Monday action outside of the Department of Justice building in St. Louis, including three of the most visible members of the Black Lives Matter movement: Deray Mckesson, Johnetta Elzie and Cornel West.

The spontaneous outrage that followed the shooting-death of Mike Brown sparked what has evolved into a sustained, nationwide protest movement against police brutality.

St. Louis City Councilwoman Hazel Erby, whose district includes Ferguson, says that while Ferguson now has a black police chief, more black officers, a new city manager and new council members the changes over the past year have not gone far enough.

“I would say there’s been some progress; legislation and those types of things that have been put in place,” Erby noted during a telephone interview. “We’ve had some of the leadership in Ferguson step down, however the mayor is still there and my honest opinion is that as long as the mayor is still there, there’s going to be problems. I think that in the best interest in the community that he should have probably stepped down.”

Erby points out that many of the new hires have interim in their job titles and therefore may not have the power to make fundamental changes. The protests in the wake of the shooting death of the unarmed Brown gave way to a new civil rights movement, focused on police accountability.

Dr. Delores Jones-Brown, a professor in the Department of Law, Police Science and Criminal and John Jay College Center on Race, Crime and Justice, believes that the old guard of police are reluctant to make changes.

“In light of the fact that we started out the year with the president’s task force on 21st century policing, we took all those days of testimony, we had a report from it, we had a report out of Ferguson, we have a report that came out of Newark, New Jersey from the DOJ,” Dr. Jones-Brown says. “And all of these reports indicate that there are problems and they are problems that need to be addressed. There seems to be a way in which our line police personnel aren’t getting that memo, or they are resisting the idea that they need to do things differently. And I think we are caught in a highly racialized power struggle between the old guard of policing and the efforts at police reform.”

A new study by the Washington Post reports that unarmed black men are seven times more likely than whites to die by police gunfire.

While the Black Lives Matter movement and social media have made the police killings of African-American citizens more visible, for many of the movement’s activists the ultimate goal of increasing police accountability seems as distant as it was a year ago.