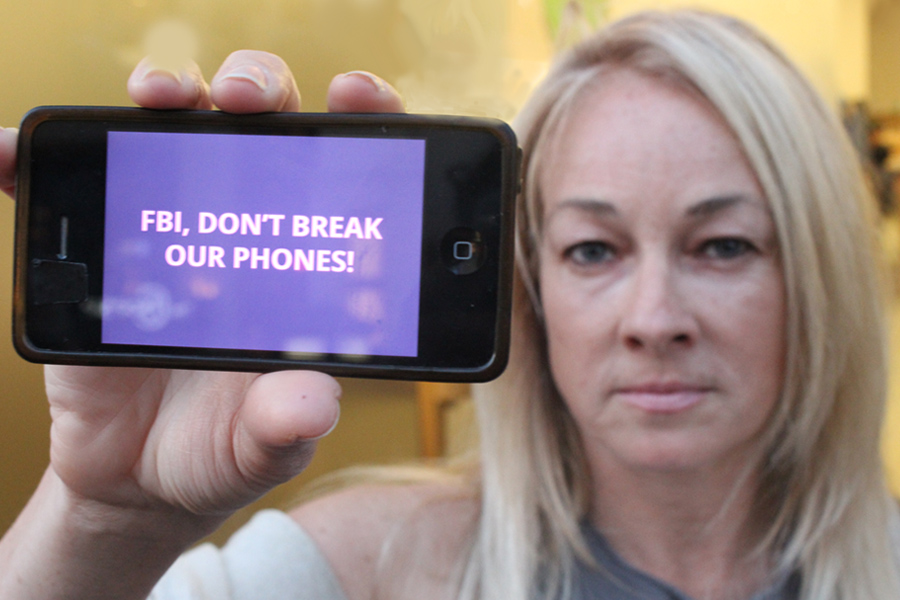 A demonstrator uses an iPhone in place of the traditional protest placard. (Photo credit: Lena Nozizwe)

Digital privacy advocates demonstrated Tuesday at Apple stores throughout the U.S. and Europe and protested at the FBI headquarters in Washington, D.C. They say they stand behind Apple after a judge ordered the company to build an iPhone backdoor. The FBI claims it only wants access to data on a specific handset linked to one of the killers involved in the mass shooting in San Bernadino, California last December, but legal experts say the move sets a dangerous precedent with far-reaching implications.

Even before the latest standoff between Apple and the FBI, the U.S. Congress has been looking at ways to circumvent computer encryption software in an effort to track the activities of terrorists who have increasingly organized under the cloak of online secrecy. But activists say such efforts have an impact on everyone.

FSRN’s Lena Nozizwe reports that, while not as many people came out Tuesday as you might see at a launch of a new iPhone or Apple gadget, the demonstration was high tech. And those who did participate say that while they are rallying for privacy, their protest is also about safety.

A small group of demonstrators held a combination of traditional protest signs and digital images displayed on their iPhones and iPads, as they stood in front of an Apple store at an upscale mall in Los Angeles. The novel use of screens as placards proved to have a learning curve for some.

It was a scene that played out at some 50 Apple stores throughout the United States Tuesday evening, in support of the company’s stance to refuse to build a software backdoor into an iPhone 5C.

The device in question was the county-issued work phone of San Bernardino shooter, Syed Farook, who, along with his wife, killed 14 people last December during a workplace holiday party.  The FBI says information gleaned from that work phone could help with their investigation. Farook reportedly destroyed his own personal phone prior to the mass shooting.

Apple argues that what the DOJ is requesting amounts to constructing a backdoor that will undermine the overall security of its products, not just one iPhone.

In an email to employees, Apple CEO Tim Cook explained the court order requires the tech giant to override a coded-in feature that automatically wipes all data after 10 bad login attempts so that the FBI could force its way in by running a program that tries every conceivable passcode. Apple and privacy advocates say that’s a slippery slope that could imperil all iPhones running the same operating system.

“We are standing on the same side as the San Bernardino victims. We care about public safety. We’re talking about the future of everyone’s security,” says Tiffany Cheng, from the internet advocacy group Fight for the Future, which helped organize the nationwide demonstrations in support of Apple. “Building the skeleton key makes it so that criminals, thieves can get in, use that software, use that skeleton key to unlock all of these devices,” Cheng explains. “Causing, or we’re hoping it doesn’t cause, the next San Bernardino.”

But FBI director James Comey says the agency owes it to the victims of the shooting to do whatever is possible to unlock the phone. Comey denies the intent is to create a general-purpose encryption backdoor or to set “a master key loose on the land.”

A survey carried out by the Pew Research Center found that 51 percent of respondents think Apple should cooperate with the FBI, and the poll shows that the support is bipartisan.  However 38 percent said the tech giant should not hack the iPhone. And 11 percent did not know exactly what should happen.

Apple built default encryption into its newer iPhone models in the aftermath of leaks by former NSA contractor Edward Snowden. The leaks revealed not only the extent of warrantless government surveillance, but also the close cooperation of tech and internet giants in programs like PRISM.

Protester Nicholas, who only gave his first name, says this case is a coal mine canary for digital civil rights: “Why? Because we are guaranteed the right to privacy and this is an extension in a digital age.”

Activists say if Apple complies with the order, it would set a legal precedent for compelling companies to override their own security measures in order to allow law enforcement to access customer data.

Currently, government hacking into devices exists in a gray area that has yet to be clearly defined in the criminal court system. Government surveillance programs usually go through the Foreign Intelligence Surveillance Court system, where rulings and interpretations of laws are often secret.

But some computer experts see an upside to the Apple-FBI standoff: a renewed focus on increasing security systems for smart phones and an opportunity to gauge public sentiment on privacy and digital rights.