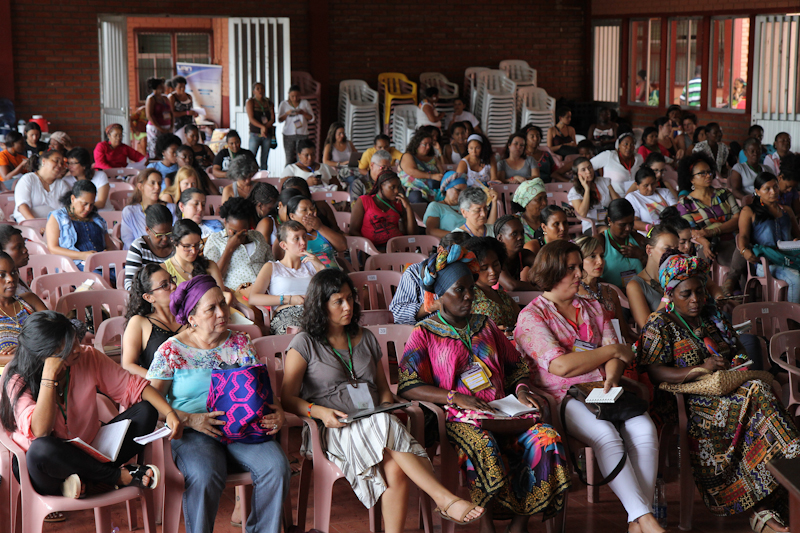 Hundreds of women from all across Colombia, largely from indigenous and Afro-Colombian communities, participated in a forum about murders of women and globalization in the coastal city of Buenaventura. (Photo credit: Andalusia Knoll)

For the past three years, Latin America’s oldest guerrilla army, the Revolutionary Armed Forces of Colombia (FARC), and the Colombian government  have been engaged in a peace negotiations to end the hemisphere’s longest-running armed conflict. Key issues at the talks in Havana, Cuba include disarmament, the FARC’s entry into the political sphere and agricultural development. They have yet to reach an agreement, but both sides say they expect to sign a peace deal in the next few months.

While Colombia’s armed political conflict may be on the path to an end, violence still rages in some of the country’s major cities, including Cali and the nearby port city of Buenaventura. But Afro-Colombian women’s organizations are taking action to combat the frightening murder rates in their communities. Andalusia Knoll reports.

A group of children play in the blazing sun amidst rows of houses on stilts in the coastal city of Buenaventura, home to Colombia’s busiest port. It’s a scene that would have been hard to imagine just a few years back, when parents kept their children indoors.

“In 2013, paramilitary groups invaded our community,” says Castillo. “They took over the streets and the first thing they did was kill a person in front of the kids and everyone and that’s when people began to feel fear.”

Nora Isabel Castillo co-founded the Humanitarian Space of Puente Nayero in 2013 to push back against frightening levels of violence in the community. Paramilitary groups supposedly demobilized after a 2004 deal with the government. Colombian authorities attribute current violence to so-called “criminal bands,” or “bacrim,” but residents like Castillo say they are really paramilitaries operating under a different name and using the same tactics, like street level territorial control, extortion and dismemberment of murder victims. When Castillo saw children mimicking the behavior with toy weapons, she decided to take action.

“One day, those of us in the community decided to get together and go confront these guys. We told them we didn’t want them here, that we want to live in peace, that we didn’t want them trying to control us. We’re our own people and want control over our own lives and we don’t want our kids seeing what you’re doing,” Castillo recalls. “Some resisted, saying they weren’t going to let us be, but when a community is united, things always have a way of working out.”

Today the 300 families that live in Buenaventura’s Puente Nayera neighborhood have expanded their focus beyond anti-violence initiatives. Women meet weekly as part of a micro-business program to help the unemployed.

All that live within the densely-populated block that makes up the Humanitarian Space are protected by precautionary measures instated by the Inter-American Commission on Human Rights. Since they started the Humanitarian Space the violence has subsided on their block but continues outside the zone’s borders.

Economic development plans aim to make Buenaventura’s port the most important in Latin America to connect the southern hemisphere with Asia. As investment has grown, so has the rate of homicides targeting women – a type of crime known as femicide.

“This is strategic territory for both legal and illegal armed actors, as well as for the state. It’s an economic enclave where women’s bodies are being violated,” Torres points out. “It’s important to make this visible so that the state, the society in general and the world economy understand that this is a territory where an institutionally-backed economic development model is being projected, but where the lives of women are being cheapened.”

A few hours drive south of Buenaventura lies Cali, Colombia’s third largest city and home to around two-and-a-half million people. An average of six people are murdered here each day.

Hundreds of thousands of Afro-Colombians displaced from the countryside by armed conflict now live in an eastern part of the city known as Agua Blanca. It’s where a group of women started the Casa Chontaduro Cultural Center to, in their words, prevent violence and transform injustice.

Every Thursday they hold sociopolitical workshops to help women in the region recognize patterns in what can seem like senseless violence.

“In Cali, we have something called ‘invisible borders’ which are borders created by paramilitaries, drug traffickers, and armed actors – and by the state by its lack of presence and failure to take action,” says Vicenta Moreno, an active member of Casa Chontaduro. “This sort of institutional absence is a way to kill and allow us to be killed, while dividing up our territories and creating animosities.”

Moreno says racism and poverty lie at the heart of the violence, which makes it important to politicize every death.

“What I mean by politicizing death is that I make her death my death, because it wasn’t just an act committed against some girl, it targeted a community and its territory and its racial identity and, by extension, its condition of poverty,” Moreno explains.

Members of Cali’s Casa Chontaduro and Buenaventura’s Espacio Humanitario say even peace accords hailed as major breakthroughs will have little impact on their work and the need for it. And even if negotiations between the Colombian government and FARC guerrillas end the hemisphere’s longest-running armed conflict, the women say lasting peace cannot happen without addressing poverty and racism.