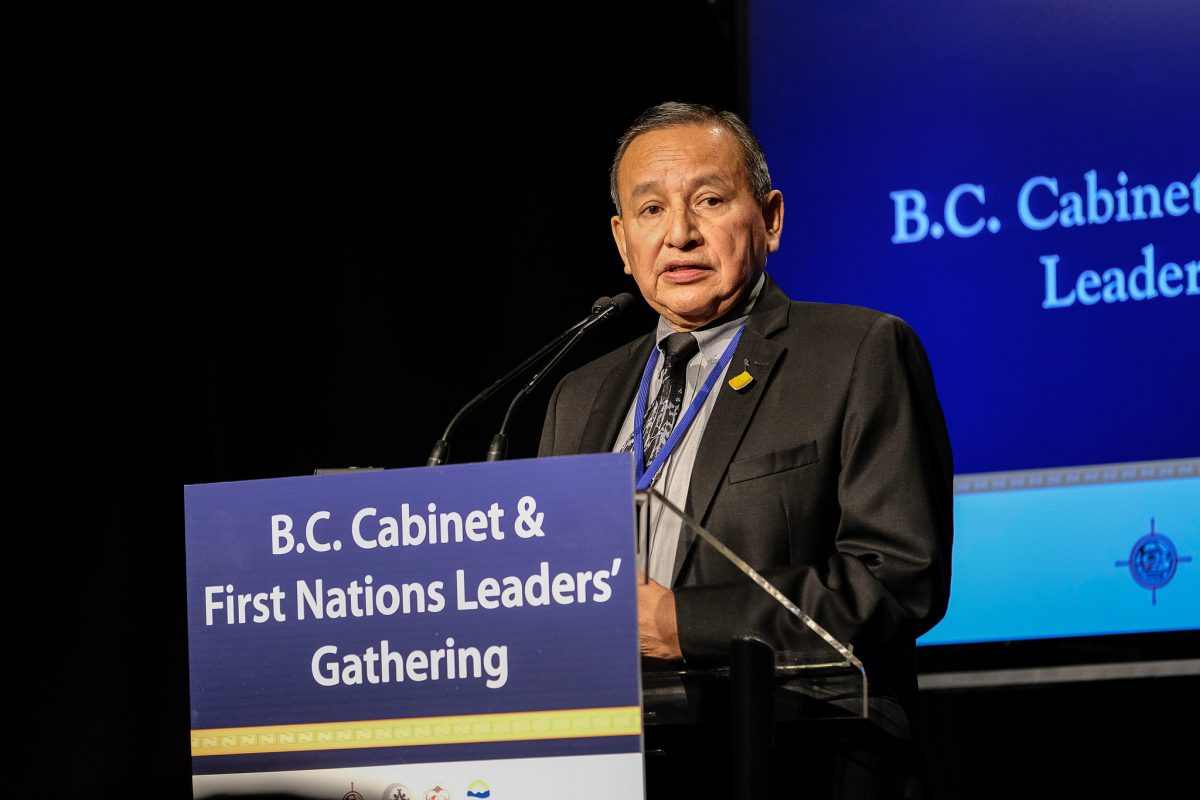 Grand Chief Stewart Phillip of the BC Indian Chiefs speaks during the opening of the 2016 BC Cabinet and First Nations Leaders’ Gathering. (Photo credit: Province of British Columbia via Flickr / Creative Commons)

Despite widespread opposition to the expansion of tar sands infrastructure in Canada, the country’s Prime Minister Justin Trudeau approved two massive energy projects this week. If built, the expansion of the Kinder Morgan Trans Mountain pipeline would triple its current capacity – potentially moving nearly 900,000 barrels of crude oil each day. A second pipeline project, known as Enbridge Line 3 also got the go-ahead

While the government did deny another Enbridge bid, and banned crude tankers from the northern coast of British Columbia near Alaska, the Prime Minister said tar sands oil production will only increase. Energy transport companies argue pipelines are a safer alternative to the controversial practice of shipping oil by rail.

Trudeau’s Liberal Party prevailed in last year’s elections in small part to his promises to reduce reliance on oil, protect the environment and honor the country’s First Nations peoples. Now 100 tribes have joined in a Treaty Alliance to strengthen their resistance to the expansion Canada’s tar sands-dependent fossil fuel industry. FSRN’s Nell Abram spoke with Grand Chief Stewart Phillip of the Union of BC Indian Chiefs.

Stewart Phillip: Well, without question, we’re absolutely outraged at the Trudeau government’s decision to green light both of these heavy oil pipelines. Needless to say, we view this as an absolute betrayal of the promises and commitments he made during the last federal election, in terms of the most important relationship with his government would be the indigenous peoples and our inherent treaty rights and our rights under the UN Declaration on the Rights of Indigenous Peoples. Secondly, Prime Minister Trudeau made a solemn promise to completely overhaul the Canadian environmental assessment regulatory processes and the National Energy Board regulatory approval processes before – prior to – making any decisions on major resource development projects. He absolutely reneged on that promise and commitment. All the Trudeau government did was tack on an additional four month period for consultation under a fundamentally flawed process. In spite of those promises and commitments, he went ahead and threw British Columbia under the bus in favor of Alberta’s political interests. We just would like to point out the fact that the vast majority of British Columbians are opposed to Kinder Morgan Trans Mountain Pipeline expansions. It’s not just indigenous peoples that stand in opposition; that was clearly evidence during the Burnaby Mountain campaign a couple of years ago, when I and well over 120 odd individuals from all walks of life were arrested.

PS: Clearly, the Treaty Alliance Against Tar Sands Expansion came as a consequence of the fact that for well over a decade indigenous peoples have become climate change refugees; in terms of wildfire evacuations in our northern indigenous communities, that’s been going on sometime – every summer, there’s massive wildfires that threaten northern communities. One the other side of the ledger, so to speak, we have massive flooding events that also have dislocated enormous numbers of indigenous peoples, who have been living in hotels and motels for up to the last five year period. The winter roads systems that our communities rely on, that are so critical to get in supplies during the winter months, are no longer available as they were in the past, and as a consequence, all food materials and supplies are flown in by air and the prices are absolutely astronomical. It’s just a travesty that these conditions exist, and we all know that it’s a consequence of global warming and climate change. The arctic ice is not as reliable was in the the past and that has an impact on the Inuit in terms of their hunting and that economy. Indigenous peoples are more greatly impacted by climate change and global warming, and as a consequence we know and understand that we simply cannot afford any further fossil fuel industry infrastructure to be developed. We have developed a treaty, British Columbia, Manitoba and Quebec, so far, have had signing ceremonies and we’re well over 100 First Nations across this country that have made that a very solemn commitment – to be part of the Treaty Alliance Against Tar Sands Expansion and everything that that represents.

NA: Grand Chief Phillip, what’s next? Are there treaty mechanisms that can be invoked to stage a legal fight in Canadian courts?

SP: Well, essentially, we’re much stronger together and we’re in a position to pool our legal advisory resources and there’s a lot of networking going on between the legal councils that represent all of our individual interests; they’re coming together and are developing legal strategies, political strategies and in the event that these lines are actually at the point of construction, there will be action on the ground to stop the bulldozers, so to speak. This is a multifaceted campaign, it’s going to be a long, ugly, protracted, legal, political and direct action battle; it’s going to span a number of years. There was a time in this country when yes did mean yes, but now, in this litigious environment, and with the UN Declaration on the Rights of Indigenous Peoples, we are in a position to push back in a very effective way. At the end of the day, these projects demand indigenous consent and the answer is still no.

NA: While the Treaty Alliance channels First Nations opposition to tar sands projects in Canada, what are your thoughts on the current events around indigenous resistance to the Dakota Access pipeline near the Standing Rock reservation in North Dakota?

SP: What’s taking place at Standing Rock, North Dakota underscores the fact that climate change and global warming, and the threats to water – this is an epic battle of water versus oil – the underlying issues at the end of the day are survival or extinction. That’s playing itself out at Standing Rock. My wife Joan and I drove from Penticton, British Columbia all the way to Standing Rock in September and met with Tribal Chair Dave Archambault and members of his tribal council. And we went to the camp and we left our Union of BC Indian Chiefs flag, as well as our Okanagan Nation tribal council flag, as symbols of our solidarity. Both those flags are flying over the camp at Standing Rock. We certainly have added our political voice to supporting the people at Standing Rock. I’m going to be attending a rally and march in downtown Vancouver this evening, which has dedicated itself to an expression of solidarity with the Standing Rock Sioux tribe.

Grand Chief Stewart Phillip is an Okanagan Aboriginal leader and has served as president of the Union of BC Indian Chiefs since 1998. He joined FSRN by phone.