Earth Day 2017: When support for science and evidence-based research became motives for a march 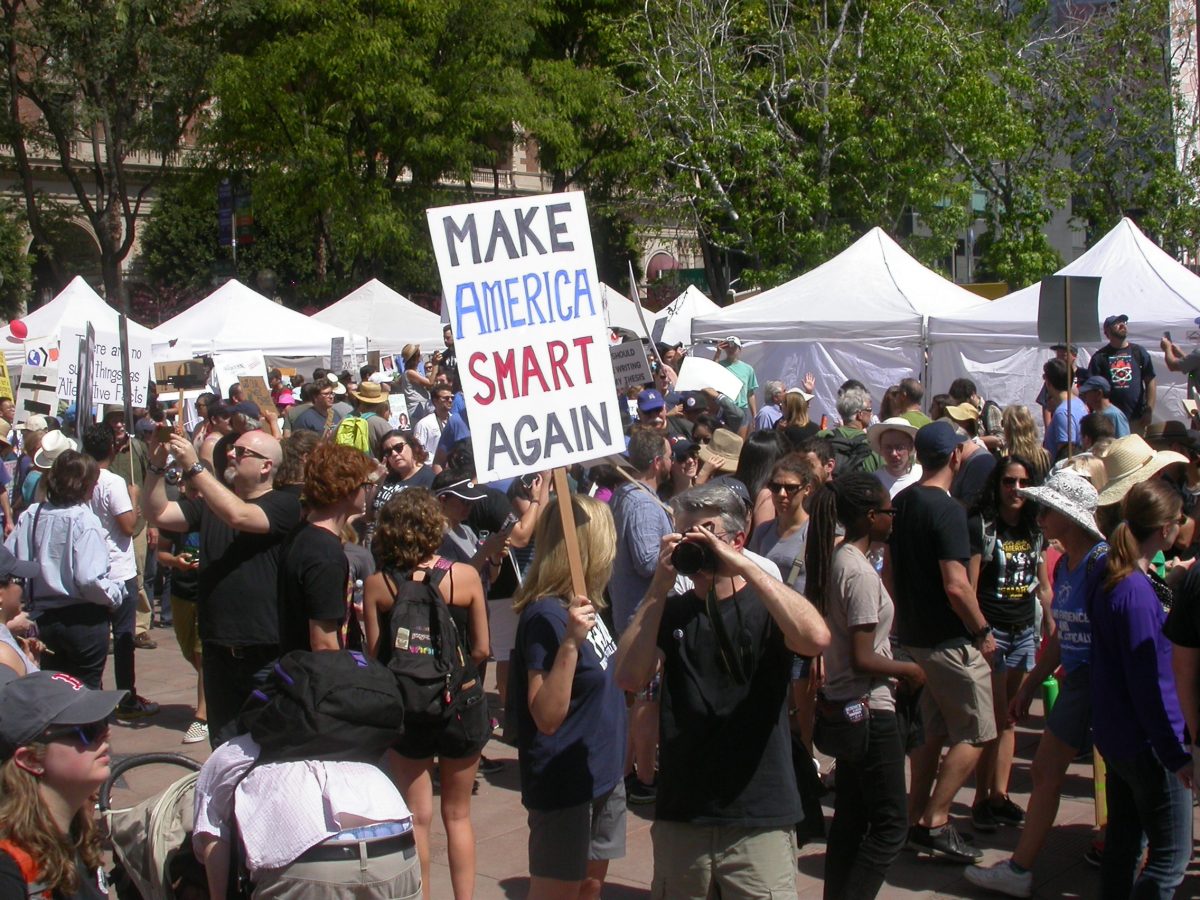 On Saturday – Earth Day 2017 – hundreds of thousands of people in more than 600 locations around the world demonstrated in support of empirical evidence and scientific research. In the U.S. recent executive actions and threats of defunding the EPA and NIH have alarmed scientists and citizens, and statements and tweets by the president have not only underestimated science, but expertise of all kinds. So professionals in scientific fields are doing something they never imagined would be part of their job: getting active and vocal. FSRN’s Larry Buhl has more from a rally in Los Angeles.

Tens of thousands people gathered in downtown Los Angeles Saturday, carrying signs evoking anger and irony, and heavy on science puns. The march brought out scientists and average citizens worried that statements and policy out of Washington not only ignore scientific conclusions, but undermine science itself.

“There is a force coming out of Washington, D.C. called the Trump administration that is out to deny truth and bury science,” said Tom Steyer, founder of NextGen Climate. “They’re doing this because they’re putting corporate profits ahead of clean air, clean water and the safety of the planet. “

“Our job is to try to understand reality, not to make decisions for society. When I worked with Mayor Garcetti at city hall, I didn’t tell him what to do. I came in to make sure he understood the implications of his decisions,” seismologist Dr. Lucy Jones recalled. “That’s what science is about – making sure we understand what’s real.”

“My years on the house science committee taught me that policy should be guided by scientific consensus,” said U.S. Congressman Brad Sherman.

They were among dozens of speakers who scolded the administration for dismissing scientific research.

They say the proposed six billion dollar cut to the National Institute of Health, the slashing of earth science research at NASA, whacking the EPA’s budget by 30 percent, and policies like the rollback of fuel economy standards, amount to a war on science by a president who’s cabinet includes climate change deniers. And when one of the largest emitters of greenhouse gasses backtracks on international climate agreements, the results are global.

Protesters say the Trump administration is only the most immediate threat in a longer-term war on evidence-based research. They say the march was a grassroots response to disciplines that should never be politicized.

“Scientific research has reached certain conclusions, and those are irrespective of politics,” explains Philip Wheeler is a former chemist and co-organizer of the Los Angeles rally. “However, when politicians decide to ignore scientific research, or, more important, scientific findings, evidence, data that goes against their ideology, they’re the ones bringing politics into it.”

What started off as a march of literal scientists in Washington, D.C. quickly morphed into a worldwide phenomenon, a grassroots outpouring aided by social media and modeled on the Women’s March in January.

Professionals in science disciplines are not accustomed to promoting their work; they assume it speaks for itself. But the American public doesn’t always agree.

Saturday’s marches are partly an acknowledgement that professionals in scientific fields need to do a better job of communicating the difference between scientific conclusions and opinion.

“As scientists, we need to stand up for the fact that what we do is important and has real world implications for what’s happening today and what’s going to happen in the future,” oceanographer Adam Savosh said.

“We realize that we have to preserve science as an institution because it’s under attack right now at the federal level,” said Eddie Isaacs of 314 Action. “And we want to recruit scientists, engineers, doctors to get involved in public life and eventually run for public office.”

“If it’s not all of us making this change, then it will be just a few lawmakers who profit from the oil and gas industry making decisions that affect all of us living beings,” educator Leah Garland explained.

Organizers admit that one day of protest won’t be enough to turn around years of political attacks on science-related fields. They say in coming weeks they’ll be brainstorming on how to harness the energy of these rallies and push back on those who try to marginalize science.

Or as one banner put it: “What do we want? Science-based policy. When do we want it? After peer review.”