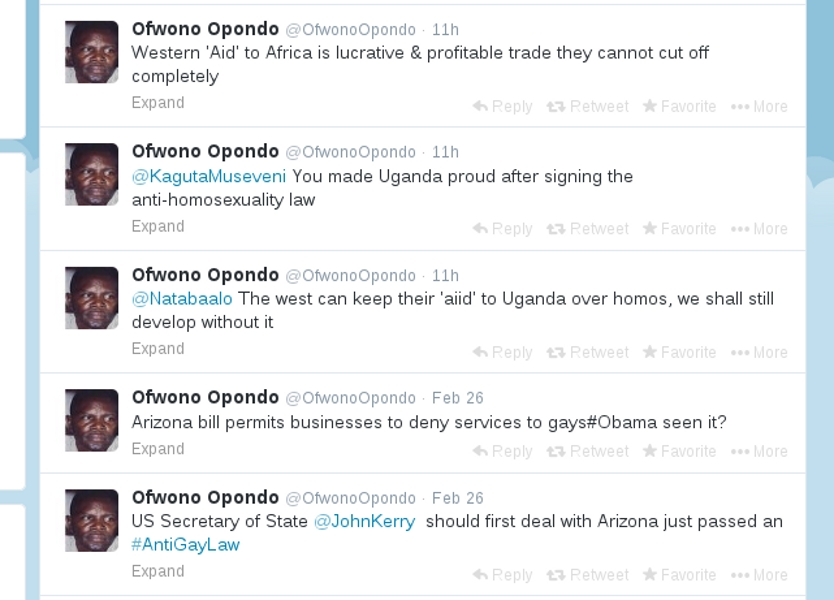 An official spokesperson for the Ugandan government today dismissed international aid-cuts announced by at least three European nations in response to a harsh anti-gay law enacted earlier this week. Ofwono Opondo, Executive Director of the Uganda Media Center, tweeted today that “The west can keep their ‘aiid’ [sic] to Uganda over homos, we shall still develop without it.”

Opondo’s tweet followed the news that the Netherlands joined Norway and Denmark in either freezing or redirecting millions of aid dollars away from UGANDA’S government, funneling the funds to NGOs and humanitarian groups instead.

Amid fears that the national currency would continue to lose value on the news, Uganda’s Central Bank took action to shore up the shilling for a second day Thursday by selling off dollars.

On Monday, Uganda’s President Yoweri Museveni signed a law that can punish some homosexual acts with sentences of life in prison. Further, anyone performing same-sex marriage ceremonies can now face seven years in jail, and those providing counseling or support services to the LGBT community may also face jail time.

The day after the bill was signed, a Ugandan tabloid ran a cover story listing the names of 200 people they say are gay, including pictures of some. This despite a 2011 Ugandan High Court decision barring media outlets from publishing such lists due to the risk of violence against those whose names appear in the list.

In 2011, Uganda’s President Museveni was sworn in for a fourth term.  The same week,  lawmakers discussed an earlier version the  bill that Museveni signed into law on Monday. The original bill called for the death penalty,  but the current law replaced that with life in prison.  The day Museveni was inaugurated in 2011, FSRN’s Danny Wood talked with Kasha Jacqueline,  founder of Freedom and Roam Uganda, an LGBT rights organization in Kampala who had just received the  Martin Ennals Award for Human Rights Defenders.