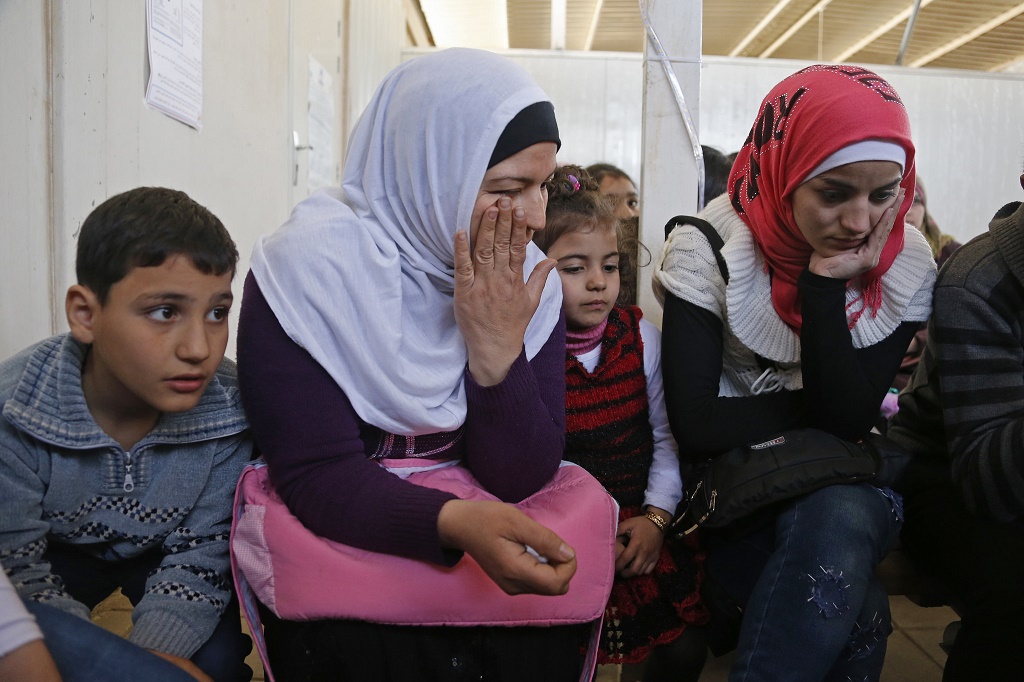 The U.S. House of Representatives has overwhelmingly approved a bill to create stricter requirements for admitting Syrian refugees into the country. Before a refugee from either Syria of Iraq could enter the U.S., the so-called American Security Against Foreign Enemies Act would require the FBI director to swear to the Department of Homeland Security secretary and the Director of National Intelligence that the individual passed a “sufficient” background check. All three high-level officials would also have to certify to Congress that the individual does not pose a threat to U.S. security. President Obama has threatened to veto the measure, but as the annual government shut-down show-down approaches, the battle is far from over.

Lawmakers on Capitol Hill don’t have a corner on the refugee rhetoric market. Politicians all over the country are taking up the issue. Molly Stentz reports from Madison, Wisconsin.

More than half of governors across the country have said they don’t want Syrian refugees in their state. A Republican lawmaker from Tennessee wants Syrians rounded up and deported. The Mayor of Roanoke, Virginia cited the U.S. internment of tens of thousands of Japanese Americans during WWII as justification for denying assistance to Syrian refugees. Here in Wisconsin, Governor Scott Walker said the Syrian refugee program poses a threat to “the safety and security of our people” and he’s directed state agencies not to provide support.

And on Thursday, GOP Presidential candidate Ben Carson compared Syrian refugees to rabid dogs: “We must balance safety against just being humanitarian. For instance, you know, if there’s a rabid dog running around in your neighborhood, you probably not gonna assume something good about that dog and you’re probably gonna put your children out of the way. It doesn’t mean you hate all dogs by any stretch of the imagination.”

Earlier this week, President Obama chastised the GOP for their anti-refugee rhetoric. He threatened to veto legislation that would slow the resettlement process.

“It is very important that we do not close our hearts to these victims of such violence, and somehow start equating the issue of refugees with the issue of terrorism, ” Obama said while in the Philippines for an Asia-Pacific Economic Cooperation summit.

The U.S. Senate is now contemplating several bills that would address the refugee vetting process. Massachusetts Senator Elizabeth Warren spoke on the floor of the Senate this week, imploring her colleagues to acknowledge the conditions refugees face.

“We face a choice,” Senator Warren said. “A choice either to lead the world by example – or to turn our backs on the threats and the suffering around us.”

U.S. Senator Ron Johnson, the Wisconsin Republican who’s the head of the Senate Homeland Security Committee, wants to increase congressional oversight of the screening process. His bill would mandate reporting to a dozen congressional committees.

“I think the one thing we have to do as oversight is to make sure that if we accept any refugees, that they are fully vetted,” Sen. Johnson said Wednesday on Chicago talk radio.

But University of Wisconsin-Madison professor Sara McKinnon, an expert in U.S. refugee policy, says that many politicians may not understand the current process.

“They’ll go through many interviews. A number of the interviews with the United Nations before their names are even given to the United States for resettlement,” McKinnon explained. “And at that point they go through even more interviews and screening processes. This is a very rigorous process. This is a process that can take anywhere from eighteen months to two years for a refugee to go through.”

Statements from Governors and other politicians have drawn sharp rebuke from civil society groups.

“It’s really contrary to the values of America and the values of Wisconsin,” said Wisconsin ACLU Director Chris Amuty. “Fortunately, governors, including Governor [Scott] Walker, don’t have a lot of authority when it comes to refugee admission or resettlement.”

While individual states could refuse to provide supporting funds, the U.S. Refugee Act of 1980 gives the president express authority to allow refugees into the country.

Some of the mayors of some of the largest cities in the country like New York, Chicago, Boston and Houston are saying they’d welcome refugees.

And in places like Madison, Wisconsin, there are lawmakers standing up for the refugees; the victims of war and violence.

Wisconsin State Representative Daniel Riemer introduced a bill to direct a state agency to apply for federal funds to assist refugees in the state. He said he personally witnessed terror attacks in London in 2005, which strengthened his resolve to help the victims of political violence.

“As important as it is to be secure, it’s also important to not let America – the strongest country in the world – not be capable of fulfilling its core mission, which is to be a place of refuge for those who seek freedom on our shores,” Rep. Riemer said. “Because they really need it.”

As the debate rages, the number of people fleeing the devastating war in Syria continues to climb. Even if the Obama Administration follows through on its pledge to admit 10,000 Syrians to the U.S., that’s less than 1% of the more than 4 million refugees who need a home.