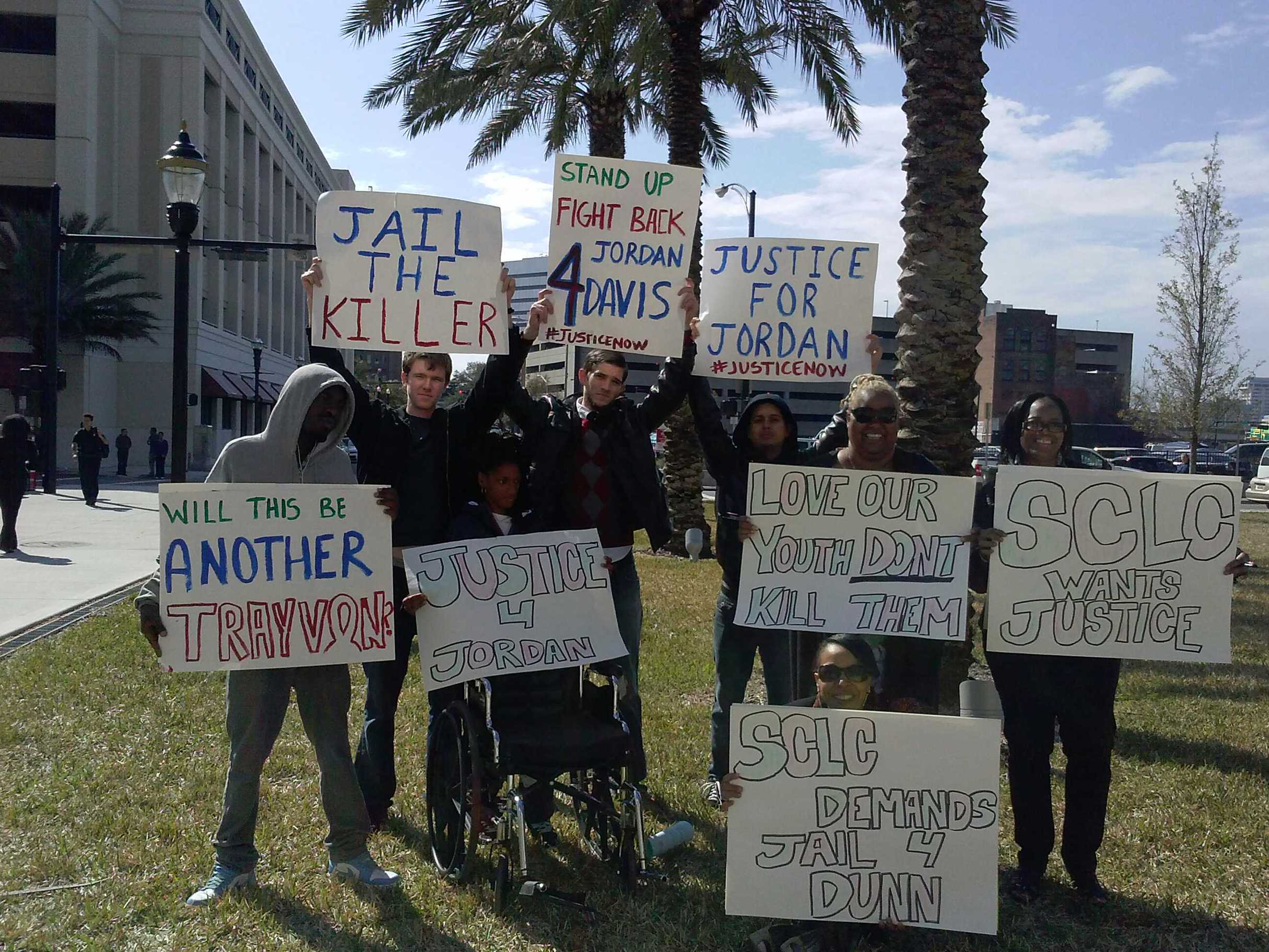 Closing arguments begin Wednesday in the Florida trial of a white man accused of murder in the 2012 killing of an unarmed black youth during a dispute about loud music. Michael Dunn is charged with first-degree murder in the shooting death of 17 year-old Jordan Davis outside a Jacksonville convenience store. Yesterday, Dunn took the stand and claimed self-defense, saying his life was threatened. The case is drawing comparisons to that of George Zimmerman, who was tried and acquitted in Florida for killing another unarmed black youth, Trayvon Martin. Richard Blake of the Jacksonville Progressive Coalition talks to FSRN’s Sean Kinane about the case and why his group has protested outside the courthouse.

“The story goes that Michael Dunn was in his car and heard some loud music from an adjacent car, essentially went over there. He says he felt threatened and ended up firing into the car injuring several of the passengers and killing Jordan Davis. The reason that this is such a big issue in Jacksonville is we had huge protests after the Trayvon Martin trial and George Zimmerman was found not guilty of killing Trayvon Martin and I was down in Sanford right as the verdict was being read and I saw people all around me going to their knees and crying when they found out Zimmerman was going to go free. The reason we think it’s so important for people to be out here in Jacksonville, we were actually out at the courthouse today, is that we can’t let that precedent continue, which is the precedent of it’s all right to kill a young black man in Florida or anywhere in the country, really, if you feel like it. That’s what the precedent that was set by the Zimmerman trial was. We feel that it’s really important to not allow that to continue.”

And the comparison between this and the Zimmerman trial is that Michael Dunn is claiming self-defense. He’s claiming that Jordan Davis, who is a black teen, was producing a weapon. What do you know about that?

“My understanding is that, yeah, he said he thought he saw something poke out of the window that was the interview that he gave to police after he was arrested. He wasn’t sure whether it was a gun or anything to that effect and it’s my understanding that there was no weapon. He essentially just fired into a car full of unarmed teenagers.”

There’s some evidence that Michael Dunn’s actions might have been racially motivated and that’s based on the letters and maybe even the phone calls that have been released since he’s been in jail.

“I would have to agree that there’s certainly some racial motivation. Certainly he’s not going to claim that outright in the trial that he shot into the car because he doesn’t like young black men. But if the role’s were reversed, for example, if there’s a black man who fired into a car full of white teens playing loud country music there would have been a lynch mob going through Jacksonville to hunt down that man. But with Michael Dunn, I mean, the fact of the matter is that you can’t shoot people for listening to loud music. There’s absolutely no reason to do that. Whether or not he likes their music, he doesn’t like it being loud is completely irrelevant, you’re not allowed to fire into a car because of it. So, yeah, I think there’s certainly some racial motivation. Zimmerman tried to make the same argument before, I’m sure the lawyers will have a similar argument which is that there’s no racial motivation it’s purely about being threatened but there’s absolutely no way, no way for them to realistically claim that there wasn’t a racist aspect of it.”

What’s the mood like there in Jacksonville either where you’re protesting outside the trial or just in the community in general about this case?

“Well I would say when I came back from Sanford and we had the protest here after Trayvon there were hundreds and hundreds of people who were outraged by that verdict and I think that outrage is still palpable in the city of Jacksonville. When I was out at the courthouse and holding signs I saw the mother and father and some of the representatives of Jordan Davis come by and they nodded their heads and gave us a thumbs up and said thank you. So we know that our supporting Jordan Davis has been good for them. I think the people in Jacksonville are more or less fed up with the idea of vigilantes going around and shooting black teens because they feel like it. I think that outrage is pretty palpable both in the black community and in the city at large. Which is why I think we had a fair amount of support outside the courthouse. In fact we had people join, walking in and out of the courthouse, join our protest. So I think that the city of Jacksonville definitely supports what’s going on. They don’t want to have our young black men be living or drive throughout the city in fear, or wherever they play loud music, that they might get shot at. Not by the police but by just a random white vigilante.”