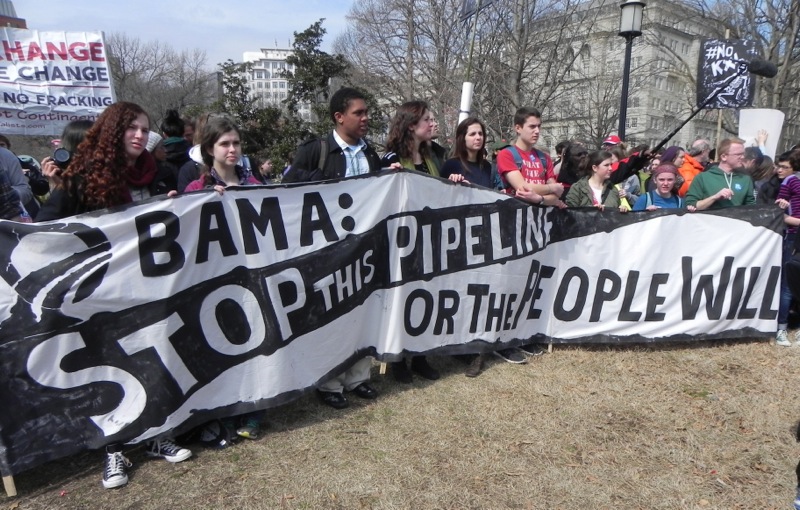 (Photo credit: Alice Ollstein. View a slideshow of Sunday’s protests by clicking on one of the images below.)

Hundreds of students and activists from across the country chained themselves to the White House fence this weekend to pressure President Obama to deny the permit for the controversial Keystone XL pipeline. The action came just days after a judge in Nebraska struck down the company TransCanada’s planned pipeline route through that state, and comes on the heels of a petition from several members of Congress for a deeper investigation into alleged conflicts of interest in the State Department’s pipeline approval process.

Reporter Alice Ollstein in Washington, DC brings us the voices and details from the protest.

Chris Wamha from Kalamazoo, Michigan came to DC on Sunday to add his voice to the hundreds of others from around the country calling on President Obama to reject the company TransCanada’s request to build a pipeline from Alberta’s tar sands to Oklahoma. From there, the pipeline would connect to another segment to bring diluted bitumen to Gulf Coast refineries.

In one thickly-gloved hand, Wamha held a black cakey rock, evidence of the damage still visible in his community from a tar sands pipeline spill in the Kalamazoo River nearly four years ago.

“Everybody I know, the kids I know, my grandparents, my uncle’s church, his congregation, everybody in my life, every spot that was important to me growing up was destroyed because of this spill,” said Wamha. He traveled to DC to share his personal account of what happens when tar sands oil spills into a waterway and to urge environmental activists to ramp up the pressure to prevent more such pipelines from being built in the United States.

The action began at Georgetown University’s Red Square, the site where President Obama gave a speech last summer saying he would not approve the pipeline if it “significantly exacerbates the climate problem.”

“I think Obama needs to listen to his constituents more and his communities and actually visit polluted sites,” said Evan Hoffman, an activist from Philadelphia. “He’s tucked away here listening to lobbyists and it’s unfortunate that that’s how our political system works now.”

The protesters first marched from Georgetown University to the house of Secretary of State John Kerry, where they blocked the street and laid out a black tarp to symbolize an oil spill. The State Department came under fire this past week for concluding that its environmental review of the Keystone XL proposal was not clouded by conflicts of interest, even though the company that authored the report has worked closely in past occasions with the firm that would build the pipeline and several other companies that would benefit from it.

A group of lawmakers are now demanding the Government Accountability Office conduct a more thorough investigation. “The Inspector General used a light touch and basically said, ‘We looked at the process outlined by the State Department, and they followed the process.’ Our fundamental point is that that process was flawed from the beginning,” said Arizona Democrat Raul Grijalva. He is not convinced the pipeline will deliver on promises of jobs and energy independence and expressed doubts about other aspects such as water contamination, land use issues and long-term remediation.

“Local communities’ ability to oppose it is being restricted,” said Grijalva. “This is also a good stand against the intense pressure we’ve had from a foreign corporation and their affiliated groups here in Washington. Intense on both the lobbying side and the financial contribution side.” Grijalva added he wants the President to use only verified, unbiased information, when he sits down to decide whether the Keystone XL pipeline would be in the “national interest of the United States.”

The protest Sunday ended at the White House, where hundreds were arrested: some for tying their wrists to the White House fence with zip-ties and some for lying down on the sidewalk in an oil-spill themed die-in. The majority of the participants were college students, many of them active members of movements to pressure their school to divest its endowment from fossil fuel-based industries.

“When we leave our safety nets behind, climate change doesn’t vanish with our emergence in the real world,” said Varshini Prakash, a student at the University of Massachusetts. “These years we’ve spent in radical, energized action don’t merely fill some activism quota. This work doesn’t end when we graduate. Hell no. I don’t know about you, but I’m just getting started.” The nationwide campaign is modeled on boycotts in the 1980s targeting the apartheid government of South Africa.

The State Department is accepting public comments on its environmental review of the Keystone XL pipeline through March 7th. After that, it will make a recommendation on whether or not to approve the project to the President, who will have the final say. 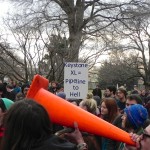 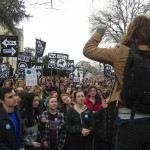 Student activists fire up the crowd at Georgetown University. 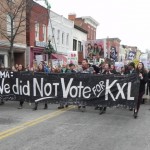 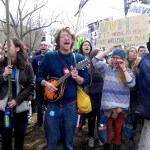 Student activists sing “This Land is Your Land” at Keystone pipeline protest. 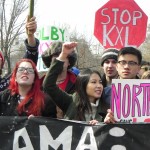 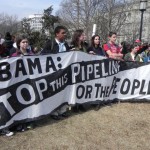 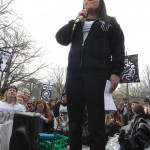 Cree activist Jasmine Thomas from British Columbia tells the crowd her people are preparing to block a tar sands pipeline with their bodies. 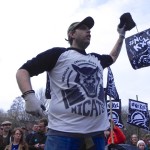 Kalamazoo, Michigan native Chris Wahmhoff holds up a chunk of chemicals and tar sands from a spill in his hometown river four years ago. 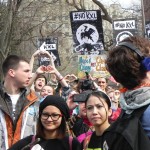 Students at XL Dissent say they got arrested out of love for the planet & future generations. 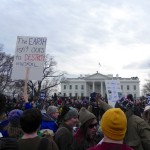 More than 400 activists were arrested Sunday. 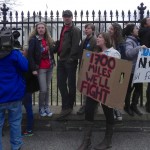 Students chain themselves by one wrist to the White House fence. 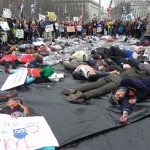 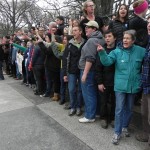 Protesters chant, “What do we want? Climate justice! When do we want it? Now!” 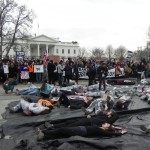 Some activists tied a hand to the White House gate, others took part in an oil spill die-in. 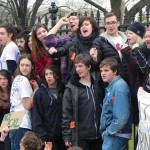 Student activists made up the bulk of those demonstrating in front of the White House against Keystone XL.