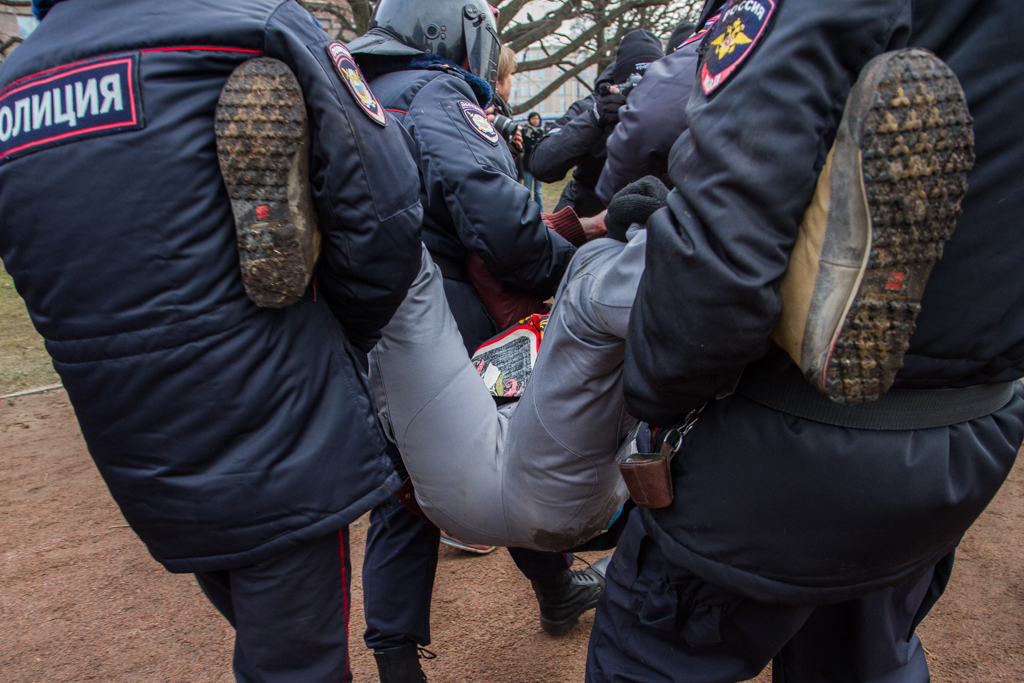 Russian troops are taking control of Crimea, an ethnically Russian-dominated peninsula in southern Ukraine, following the surprise ouster of the sitting president after months of demonstrations in the central square. Many Russian accuse the United States of fomenting a regime change in Ukraine, while others are speaking out against Russian intervention in the country’s affairs. Ekaterina Danilova reports.

Rallies on the issue of Ukraine took place in major Russian cities on Sunday. About 300 people were arrested at unsanctioned rallies in Moscow. About 40 were arrested in St. Petersburg, where fights broke out between people supporting and opposing Russian intervention in Ukraine.

Supporters of Russia’s intervention are mainly Russian nationalists, who say that it’s necessary to bring Russian troops to Ukraine to provide protection for Russian citizens living there. They say Russians living in the country are threatened by Ukrainian nationalists currently in power in Kiev. They also accuse the United States of funding the opposition and supporting the illegal ouster of the president.

Vitaly Milonov is a deputy of the St. Petersburg Legislative Assembly, well-known for introducing the city’s anti-gay law and supporting the Orthodox church.  “We think that in such a tragic situation,” says Milonov. “Of course our brothers in Crimea and Eastern Ukraine have the right for life, for bringing up their children not surrounded not by fascist, brown, I’m sorry, slime, but in a normal environment.”

Those opposed to Russian intervention in Ukraine view the opposition movement that forced the change in government as a reflection of a majority sentiment that supports a move toward the European Union and democratic ideals. They also decry what they call Russia’s violation of international law, which they say sets a dangerous precedent.

Attorney Sergey Bulavsky is surprised at what he calls a blatant violation of global norms. “They are mainly violating the Budapest Memorandum, which guarantees the territorial integrity of Ukraine,” says Bulavsky. “Russia is a direct guarantor, because it removed nuclear weapons out of Ukraine. The consequences will be far-reaching, because now any Iran or North Korea say, ‘Guys, you are tricking us. Only nuclear weapons guarantee untouchability.”

The Russian Foreign Ministry called Russia’s actions in Crimea absolutely legal in a statement, and said Russia is ready to take part in a workgroup on this issue with the European Union.

But citing what they call Russia’s illegal occupation of Crimea, the Group of Seven countries with the world’s largest economies, or G7, has postponed preparation for their planned meeting in Sochi in June.

The United States is threatening economic sanctions against Russia if it engages in aggressive acts, and U.S. Secretary of State John Kerry is planning to visit Kiev Tuesday in a show of support for the new regime.