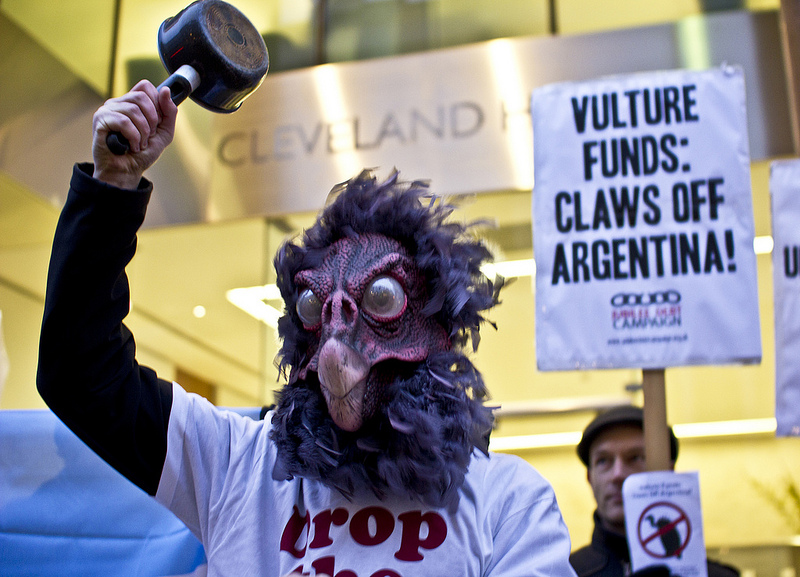 The debt relief organization Jubilee USA Network and 75 other religious and development groups filed an Amicus brief with the US Supreme Court today in a case that pits Argentina against NML Capital. The outcome of the case will likely set a precedent for debt restructuring practices between so-called “vulture funds” and developing countries. For more on the case, FSRN’s Shannon Young spoke with Eric LeCompte, Executive Director of Jubilee USA.

Shannon Young: What are the basics of this case and why is it so significant that the Financial Times is calling it the “debt trial of the century?”

Eric LeCompte: For a court case in the legal U.S. system, it will probably have one of the biggest impacts on global poverty in our lifetimes. So, the case is incredibly significant for a legal proceeding.

This particular court case is between a predatory hedge fund that’s called NML Capital – and NML Capital as a predatory fund actually targets the assets in developing economies that are supposed to go for poor and vulnerable populations. It’s actually pretty amazing when you think about it that there are hedge funds that buy up distressed debt from poor countries and then sue in full under U.S. law and they actually take the money that’s allocated to build infrastructure and help vulnerable populations.

This case at the Supreme Court will do one of two things. It’ll either say that this behavior about predatory hedge funds is unacceptable or it will say that this particular behavior on these hedge funds should be stopped because they actually perpetuate extreme poverty in the poorest countries of the world.

SY: Can you sum up in plain English the mechanisms behind purchases of sovereign debt? How do the so-called vulture funds work and why are poor countries most at risk?

So, essentially what happens is contracts between governments and between lenders are signed under New York law. And then when a country is in financial distress or is close to not being able to pay back its loans, sometimes creditors will sell their bonds, they will sell the debt for pennies on the dollar. And when they sell that for pennies on the dollar, it’s these vulture funds who swoop in, buy it, and then they wait when the country has settled with most of its creditors – so that now it’s getting debt relief and is putting that money towards helping its population – and once that happens, what these predatory hedge funds known as “vulture funds” do is they go and they target those assets that are supposed to be used for poor people and, using the New York court system, they sue.

So now this case between Argentina and NML Capital is before the Supreme Court and the precedent that it sets will be a precedent that has profound impacts on extreme poverty for decades to come.

SY: If these contracts are signed under New York law and the Supreme Court mostly takes on Constitutional questions, what type of jurisdictional power does the Supreme Court have over these questionable financial dealings by US-based hedge fund actors abroad?

ELC: Well, as the highest court in the land, the Supreme Court is looking at both sovereignty issues like when can a corporation like these predatory hedge funds try to target assets that belong to another country. But the bigger question is the question of parity and this is a question the Supreme Court will hopefully settle that will say that when debt restructuring happens, and it’s benefiting poor people, we need to ensure that all of the creditors are a part of the restructuring; that they don’t hold out and they don’t try to sue for more than what they deserve.

SY: How far back does this debt go?

ELC: It goes back to 2001 when Argentina defaulted on its debt. Right now, it has settled with about 93% of its creditors. It’s just a small percentage that are holding out and suing and using this predatory behavior right now. What we’re trying to do by introducing this Amicus brief at the Supreme Court is to say those that live in extreme poverty have a voice at the table. And the precedent in this case will go far beyond Argentina. It will affect Sub-Saharan Africa, it will affect the Ivory Coast, it’ll affect Zambia, and every corner of the world where we see poverty.