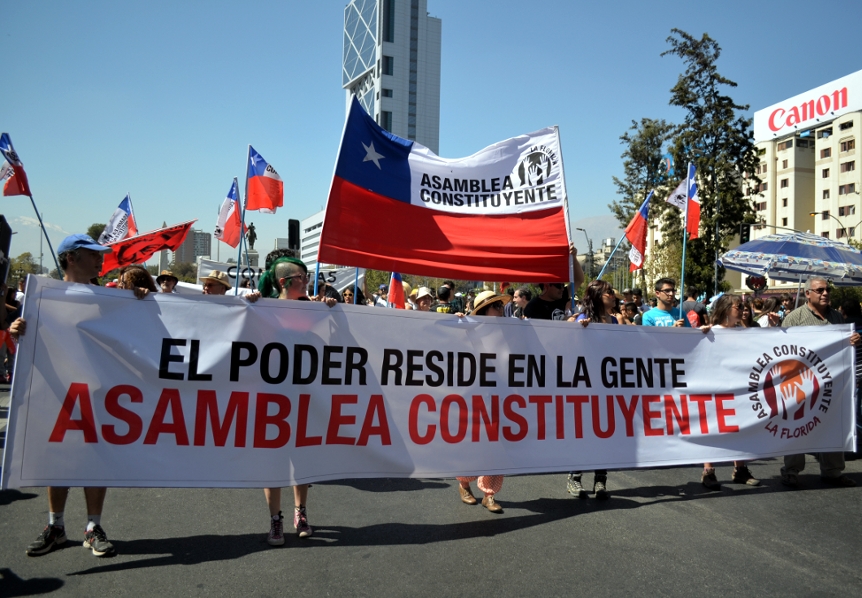 In Chile, organizations and citizens are coming together to demand a new constitution. They say the country’s current constitution is illegitimate because it was written by former dictator, Augusto Pinochet. To replace it, they’re calling for a constituent assembly and for a constitution that includes democratic reforms as well as guarantees of human rights, such as free, high-quality public education, autonomy and land rights for the country’s indigenous people, and reproductive rights and same-sex marriage. FSRN’s Eilís O’Neill reports from Santiago.

About twenty-five thousand protesters gathered at a march on Saturday calling for a Constitutional Assembly. Michelle Bachelet, who returned to the Chilean presidency on March 11, has said constitutional reform is one of her three top priorities, but she hasn’t said what that reform will look like.

Saturday’s protesters have a clear idea of what it should look like. “Power resides in the people: Constituent Assembly!” they chant.

Chile’s current constitution was written by former dictator Augusto Pinochet and his advisers in 1980. It includes a number of features designed to prevent political change. First, it establishes a binomial electoral system that means that conservative political parties are overrepresented in the Chilean Congress. Second, it creates the powerful Constitutional Court that can review all new legislation. Third, it requires supermajorities to overturn some dictatorship-era laws.

It’s not the first time rewriting the Pinochet-era Constitution has been on the national agenda. In 2005, then-president Ricardo Lagos tried to push a major constitutional reform through the Chilean Parliament. But he failed to change much, says constitutional lawyer Fernando Atria, because of the supermajorities required to amend the Constitution and because of the binomial electoral system that assures that about fifty percent of members of Congress will likely be conservative.

“Any constitutional reform that is subject as to its content to these rules of constitutional change will only reproduce what happened in 2005,” Atria says. “That’s the argument for something like a Constitutional Assembly.”

Atria says it would be possible to call for a Constitutional Assembly without breaking with the current institutional order. Congress would have to modify some of the constitutional rules that require only three-fifths of the votes. Since Bachelet’s coalition, the New Majority, controls almost three-fifths of Congress, significant change is both feasible and necessary, Atria says.

“The price to be paid for having a constitutional structure that doesn’t allow for real political change, when you have a demand for change—well, the price is instability, delegitimization,” he says.

In the past ten years, two South American nations, Bolivia and Ecuador, held constituent assemblies to rewrite their countries’ constitutions. Though Chile is the only country that’s been living under a dictatorship-era Constitution for over two decades, there is nonetheless an important similarity, Atria says.

“The political process got [to] that point when an unstoppable force met an unmovable object,” he explains. “In Chile, we are not that far from that point.”

If the Pinochet-era Constitution is the unmovable object, perhaps Saturday’s demonstration is the unstoppable force. Activist Georgina Febré, for one, seems determined to demand change.

“This constitution doesn’t guarantee human rights. It guarantees the rights of corporations, not of individuals: not the right to education, the right to health,” says Febré. “That’s what we want to change.”

Though Bachelet has promised to reform the Constitution, she never clarified when or how that change would take place. Perhaps it will take this popular movement, embodied by the thousands of people in the street on Saturday, to create enough public pressure to budge the so-far unmovable 1980 Constitution.