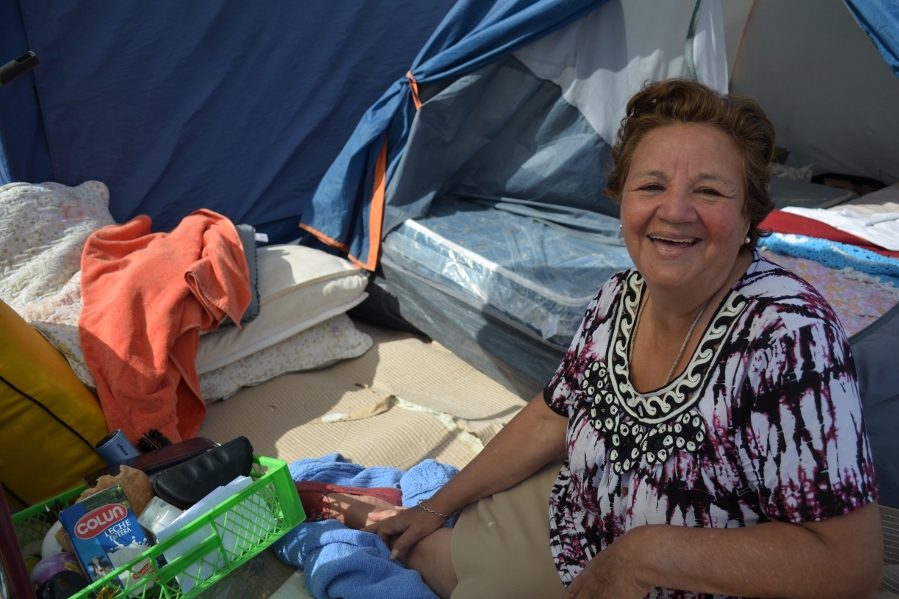 As Chile faces its second tragedy in under a month—fires that tore through the city of Valparaíso, leaving at least fifteen people dead and another eleven thousand homeless—northern Chile is still struggling to recover from the 8.2-magnitude quake that rocked the region on April first and the 7.6-magnitude aftershock that struck on April second. The earthquake killed six people and damaged schools and homes throughout northern Chile, and a small tsunami triggered by the quake destroyed fishing boats in several coves. From northern Chile, Eilís O’Neill has more.

It’s been three weeks since the earthquake struck northern Chile, but about one hundred people are still living in this municipal gym in the city of Alto Hospicio. Rosa Palacios is here with her husband and two children. She says she lost everything in the quake.

“Since the room was collapsing, we had to get out of the house fast,” Palacios remembers. “During [the aftershock] the next night, at least we were already in the street. At that point, there were a lot of people sleeping in tents and everything. Terrible. Terrible, terrible, terrible, terrible. I slept in the plaza for four days, and then I was brought here so that I wouldn’t be sleeping outside.”

The city is sheltering anyone who needs a place to stay, says Camila Arce Fajardo, a social worker and the director of community development in Alto Hospicio. “Many of those [living in the gym] have structural damage to their houses,” she explains. In addition, “there are also foreigners who are too scared to return to Iquique.”

The city of Iquique is located by the ocean and much of it is considered at risk in the event of a tsunami. When the quake struck, much attention focused on the wealthy coastal town and how well it fared, but in the less affluent Alto Hospicio – situated on top of a nearby cliff – the damage was far more extensive. In Iquique, only 150 homes were destroyed, but in Alto Hospicio more than 1,000 houses are now uninhabitable.

In addition to those still living in the municipal gym, there are several thousand people living in tents near their old homes, says social worker Camila Arce. There are at least four or five tents pitched in almost all the plazas and parks of Alto Hospicio. Sixty-five-year-old Elba Rojas is camping out in the Plaza O’Higgins, across the street from her old home.

“[The government] wants me to move down [to the gym] but I don’t want to go because I think I’m fine here on the sand,” she says. “I feel safe.”

Rojas’ house and all of those in a two-block radius of this plaza are at risk of collapsing. So, she and many of her neighbors are camped here.

“[The government] brought us a little package of stuff: two water bottles, which is what each person gets, and a blanket, a tent, and a mattress,” Rojas says. “We can’t get anything out of our houses, because the walls are broken. No one dares to go there. The situation has been difficult. So everything depends on the government, on what help they give us. I just need a couple of rooms.”

The government has yet to start the process of reconstruction in either Alto Hospicio or Iquique, says Camila Arce, the social worker.

“Municipal teams are working on those small points that could generate risks for people or for buildings,” Arce says, “but the reconstruction hasn’t started yet. It’s the [national] government that has to give us the green light for that task.”

Even when the government does begin the rebuilding process, it plans to start by constructing what it calls “emergency houses”—simple, one-room shelters. Ana María Luksic directs Iquique’s government Youth Institute and is responsible for organizing the volunteers who will build the emergency houses.

“The government, together with [the NGO] A Roof for My Country, will provide emergency housing as a temporary solution,” Luksic explains. “But the idea is to continue the reconstruction over the long term. It’s a process that will take several years.”

Back in the municipal gym, Rosa Palacios says she’s looking for a new room to rent. Her children are suffering psychologically from the quake and she wants to normalize her family’s life as soon as possible.

“If anything starts to move, [my kids] say, ‘It’s an earthquake! It’s an earthquake!’” Palacios and her kids are sitting on a pile of mattresses and garbage bags filled with clothing. “They remember sometimes, and become [scared]. They start to cry. And with reason. That’s why I want to normalize our lives as soon as possible.”

The school that Palacios’ children attend was also damaged during the earthquake, so classes won’t resume till April 28th. Many in Alto Hospicio worry that, now that the Chilean government is dealing with a second catastrophe—the fire in Valparaíso—the north will have to rebuild itself without federal assistance. But Camila Arce, the social worker, is nonetheless optimistic about Alto Hospicio’s future.

“Little by little, the people of Alto Hospicio are getting back on their feet,” she says.