An elderly woman, standing silently erect with hand-painted, striking banners is a common sight at pro-democracy and human rights rally in St. Petersburg, Russia. Some activists call her “the grandmother of the opposition.”

Elena Andreyevna Osipova, 69, began her opposition actions in October 2002, in the wake of the Nord-Ost attack in which Chechen terrorists occupied a Moscow theater during a performance, taking hundreds of people hostage. Over 100 people died in a botched gas attack by security forces. Elena Andreyevna puts at least part of the blame for the tragedy on Putin.

“I didn’t understand why everybody was silent. It was as if the whole country was frozen. And I went with a simple printed banner – I didn’t understand then that it’s possible to paint, to express in your own way,” Elena Andreyevna said of that first protest action. She stood with her sign near the city parliament building, which said, “Mister President! Urgently, urgently change your way! Let Chechnya go!”

She continued her activism after that first protest. In March 2007, the opposition group Another Russia organized a major rally called “The Dissenters’ March.” The slogans were: “Russia without Putin, we need another Russia, free the political prisoners, and no to the police state.” It was at that rally that Osipova was detained for the first time and received her first fine.

She says she has been detained about five times since then. The most recent arrest was in February at an unsanctioned protest in support of freedom of speech. She was initially fined 10,000 rubles, or $280, but the appeals court reduced the amount to 5,000 rubles, or $140. She refuses to pay the fine on principle and says she prefers for the government to take the money from her pension, which is 8,000 rubles, or $230 per month. Activists collected money to pay for her fine but she refuses to take it, asking them instead to send it to political prisoners.

One way to avoid arrest for public protest in Russia is to engage in what’s known as single-picket protest. In one such action in 2012, Osipova joined a handful of others standing apart from each other with banners opposing the inauguration of Vladimir Putin to his third term as president. The opposition claimed the elections were fraudulent and the country had seen a wave of protests against Putin’s return to the presidency.

Beyond the risks of arrest, Elena Andreyevna also faces threats from troublemakers or provocateurs at the rallies who often ask her how much money she gets paid for standing with a banner or speak to her rudely. At one recent rally where she protested Russian involvement in Ukraine and war, the pro-war demonstrators threw liquified feces on her.

Although she has health problems and was recently diagnosed with diabetes, she continues to paint and prepare for upcoming rallies. 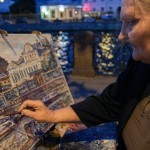 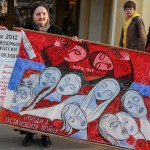 Elena Andreyevna stands with banners following the third inauguration of President Vladimir Putin in May 2012. The banner says Putin is guilty of many deaths during the war in Chechnya, terrorist acts, of not fighting sales of illicit drugs and of not adequately funding treatments for tuberculosis and AIDS. Her own son died of tuberculosis in a decrepit hospital when he was 28 years-old. 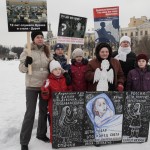 She poses for a picture with supporters at a protest against a law banning adoptions of Russian children by Americans. The banners criticize the use of children for political gain. 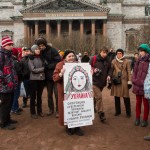 Elena Andreyevna is standing at one of the recent anti-war rallies in support of Ukraine. The banner says “Occupation of sovereign Ukraine will drive Russia apart from dear Ukraine for a long time.” 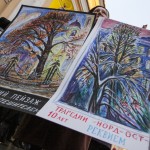 To avoid detention by the police, Elena Andreyevna prefers the single-person picket form of action, which is generally allowed without a permit. The banners say “Political landscape with angel-comforter” and “It’s 10 years since Nord-Ost tragedy. Requiem.” 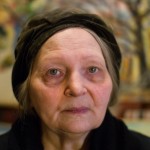 Elena Andreyevna has lived a difficult life and prefers to do everything by herself. 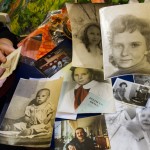 Elena Andreyevna is looking at the pictures of herself, her deceased husband and son at a younger age. Her husband, who was a censored artist in the Soviet times, died in uncertain circumstances in Sweden long ago. 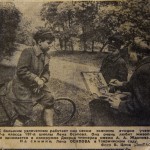 The photo from an old newspaper shows her as a schoolgirl painting in a city park. It says that she loves painting a lot and goes to the art hobby group in the city pioneer’s palace. 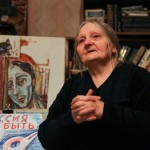 Despite her difficult life, Elena Andreyevna loves Russia very much and wants freedom for her country, which she represents with a bird. The words say “Russia wants to be a free bird.” 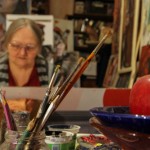 She lives alone in a tiny room in a so-called Communal Apartment (a flat with several rooms and common kitchen and toilet) with neighbors. She spends most of her small pension on paints, brushes and canvases. 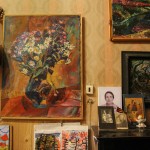 Her room is filled with paintings and memories. The mandolin was her grandfather’s, and pictures of her husband and son, both deceased, stand on the piano. 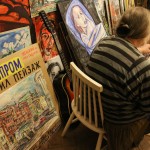 Elena Andreyevna is preparing the banner for a rally. She supports democratic principles and demonstrates against wars and corruption, and in support of political prisoners. 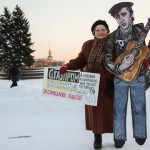 Elena Andreyevna is at a rally with the figure of the well-known Russian singer, Vladimir Vysotsky, and a quote from his song Hear us on the Shore.  The other banner says “Gazprom is the most wealthy company in the world, but in the old lady’s flat the gas doesn’t work. For just society.”