More than 1,500 killed in northeastern Nigeria since the start of 2014: Amnesty International 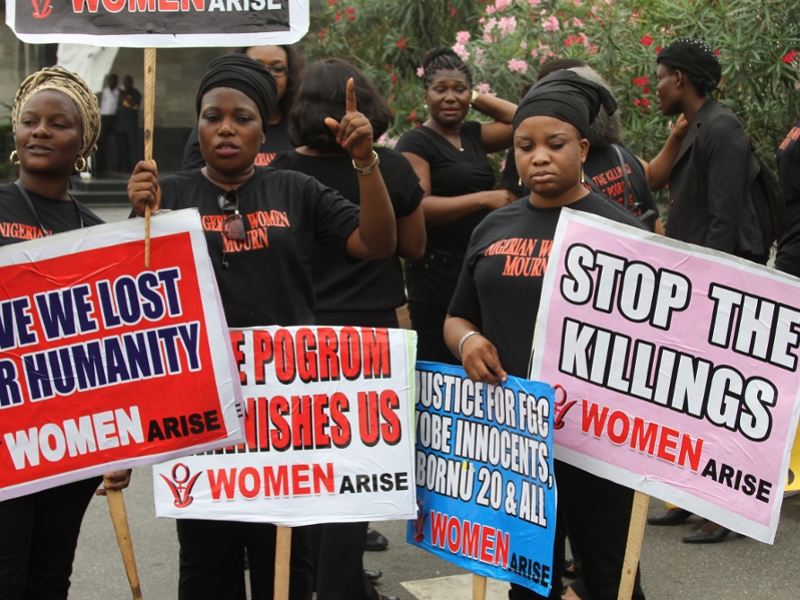 Boko Haram, a sect with links to Al-Qaeda, has stepped up a violent campaign for the enforcement of Sharia law in Nigeria. In a briefing released Monday, the human rights organization Amnesty International estimates at least 1,500 people have been killed in North East Nigeria in the first three months of this year. Civilians make up more than half of the dead in the fighting between Boko Haram and Nigerian security forces. Many of the victims are under of the age of 18. Sam Olukoya reports from Lagos.

Amnesty International blames the Boko Haram sect and security forces for more than 1,500 deaths since the start of the year in northeastern Nigeria. Boko Haram is as known to carry out vicious attacks like the one in February on a federal government run school in the northeastern state of Yobe which targeted students as they slept in their dormitories. Dozens of children were either killed or abducted.

It wasn’t the first time Boko Haram, which is opposed to Western secular education, has attacked a school.

The massacre shocked many Nigerians. “I am a woman and I am a mother and we actually saw those gruesome murders on TV, there is no woman that her heart will not lurch,” said Olufunke Ogeah. “You carry your pregnancy for nine months you gave birth to the child, you nurtured the child and the child’s life was snuffed out… My goodness that is terrible.” The Lagos resident is one of many Nigerian women calling on the government to take urgent action to protect children in North East Nigeria.

Thousands of women in several Nigerian cities have held rallies to protest the killing of children and the abduction of young girls by the Islamist sect. “Our work is to prove a point and that point is that we need government to be much more responsible and responsive,” said Joe Okei-Odumakin at a recent anti-Boko Haram rally he helped to organize in Lagos.

Attacks attributed to Boko Haram have killed hundreds each year since 2010, but the violence has spiked considerably in the last three months.

Three states in northeastern Nigeria are under a state of emergency. This is part of efforts by the Nigerian government to enable the military to effectively deal with the Bolo Haram insurgency, but this measure has not yielded much success. Some reports say morale among the soldiers quelling the insurgency is low because they are not properly motivated and are poorly armed. The rally organizers want the military to be better armed in view of Nigeria’s huge defense budget.

Boko Haram, which has links to Al-Qaeda, is waging a violent insurgency to install an Islamist government in Nigeria. About half of Nigeria’s population is Muslim. The bulk of the remaining half are Christians.

Dr. Sylvester Odion Akhaine says the recent mass killings by the group appear to be an attempt to draw attention to itself. “Because of the large scale of carnage that is involved, it becomes an issue,” according to the Lagos State University academic. “It draws instant attention, because terrorists also carry out acts of subversion, acts of terrorism in order to draw global attention to their cause. And within that context, I think they have done so quite well, that everybody, the pope, the United Nations, the US, the British everybody is condemning what they have done.”

Even though troops have been deployed to combat Boko Haram in northeastern Nigeria where it is most active, the military appears ineffective in stopping the sect.

The military has also been accused of major human rights violations. The Amnesty International report released Monday states soldiers have carried out hundreds of extra-judicial killings in the northeastern states since the conflict intensified. The worst of these incidents occurred on March 14th, when more than 600 people were killed when soldiers regained control of a barracks and prison that had been taken over in a Boko Haram offensive.

The spike in attacks and violent reprisals has left civilians in northeastern Nigeria with the choice between fleeing to safer areas or remaining in the crossfire.