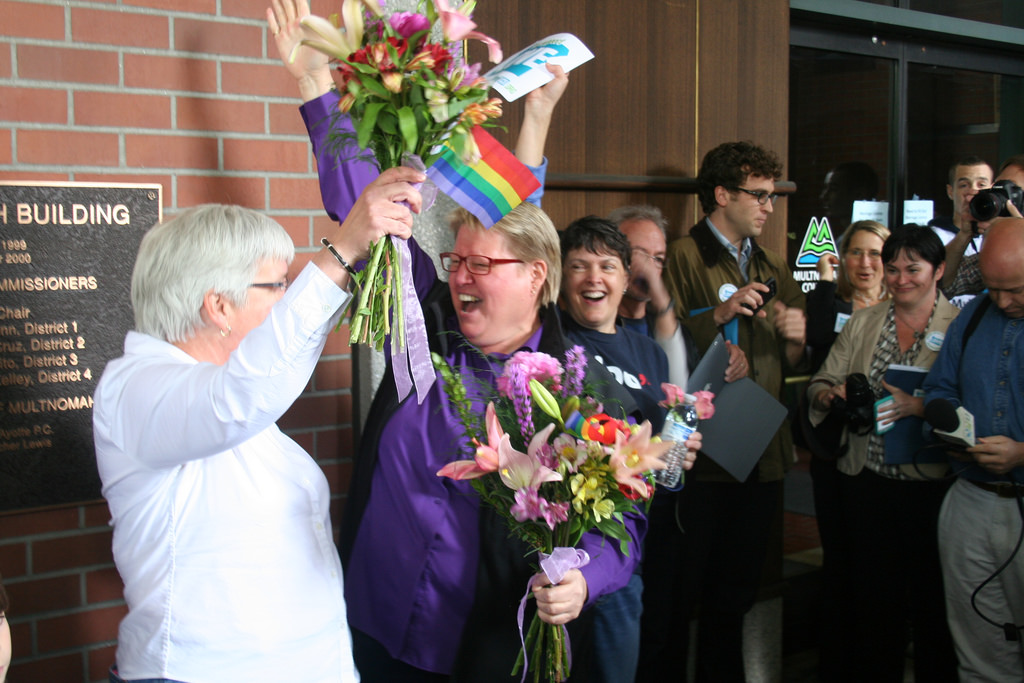 It’s been a busy week on the same-sex marriage front.  Judges in two states – Oregon and Pennsylvania – overturned constitutional and statutory bans.  There were also developments this week in Utah and Idaho. From Eugene, Oregon, reporter Jes Burns has this update.

Couples in Eugene rushed to the County Clerk’s office just after noon on Monday. That’s when Federal Judge Michael McShane ruled Oregon’s voter-approved state constitutional ban on same sex marriage violated the equal protections clause of the 14th Amendment of the US Constitution.

Barb Bellows said she’d, “been sitting on the internet, refreshing, waiting for the judgment to come down from the judge.” Bellows and her partner Pam Irwin applied for their marriage license over their lunch hour. Both women had been around in 1992, when Oregon voters just barely defeated an anti-gay propaganda measure, and in 2004 when voters banned same-sex marriage.

“It’s a long time coming,” said Irwin. “I told her at the beginning of this year it probably won’t ever happen in Oregon. So this is a nice, sweet change.”

Oregon’s Attorney General declined to defend the state marriage ban in court. Just days before oral arguments were to begin, the conservative National Organization for Marriage filed a motion to defend the law instead. But the judge denied that motion to intervene.

The National Organization for Marriage has as filed an emergency appeal with the 9th Circuit Court.

As same-sex couples around Oregon were rushing to tie the knot, about 1000 married gay and lesbian couples in Utah received the news they were looking for. A federal judge said the state must recognize marriages performed this winter during a brief window when same-sex unions were legal. Currently same-sex marriage in Utah is on hold pending an appeal. A day later in Idaho, a federal judge upheld a stay on same sex marriage while an appeal works its way through the courts.

But the historic week for LGBT rights continued about 2000 miles to the east. A judge struck down a Pennsylvania ban on same-sex marriage on Tuesday.  Like in Oregon, Pennsylvania’s Attorney General Kathleen Kane announced last year in a press conference she would not defend the law, stating she could not “ethically defend the constitutionality of Pennsylvania’s version of DOMA,” because she believes it to be unconstitutional.

Tuesday evening, about 200 people gathered on the Capitol steps in Harrisburg to celebrate the win.

LGBT rights group Equality PA immediately started a petition to ask the state’s Governor not to appeal the judge’s decision on same-sex marriage. On Wednesday, Republican Governor Tom Corbett announced the state would not appeal because of the unlikelihood of success.

Equality PA Director Ted Martin applauded the decision, describing it as “breathtaking, absolutely mind-blowingly, breathtaking.” He has high hopes for legal battles across the country going forward, citing the ruling of Judge John Jones, a George W. Bush appointee, in the Pennsylvania case said these laws, “deserve to be in the ash heap of history.”

Martin is optimistic that judges are looking at the cases through a legal lens, not one of ideology. “And that’s a good thing,” he said. “Because that means we win.”

Arguably, the impetus for all of these rulings can be traced back to the US Justice Department’s decision not to defend the federal Defense of Marriage Act and last summer’s Supreme Court decision knocking down part of that law.  Since then, 19 states have either legalized same-sex marriage or had judges throwing out current bans.  Gay couples in a 20th state, Montana, filed suit challenging its law on Wednesday.

It is expected that final resolution on the issue nationally will only come with another Supreme Court ruling.