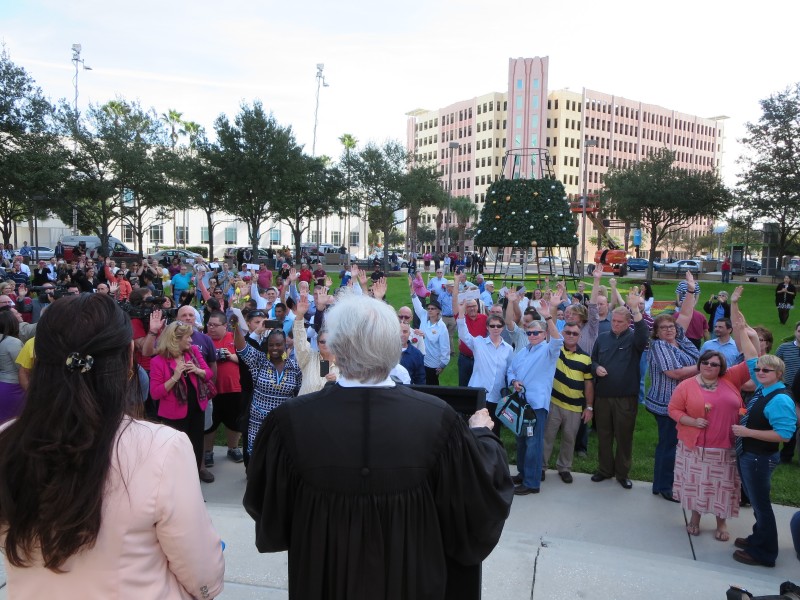 Same-sex couples in Florida are rejoicing as many legally tie the knot Tuesday. But while Florida is now the 36th state to approve same-sex marriage, 14 other states still do not allow gay couples to legally wed. FSRN’s Samuel Johnson reports couples lined up in front of the St. Petersburg courthouse before the doors opened at 8:00 a.m.

After about 30 minutes of paperwork, Andrea Deflippo and Erin Bell were escorted into a small room cramped with reporters. Supervisor of Recording Services Arricka Grant performed the ceremony.

“By the power vested in me by the laws of the State of Florida, I now pronounce you married. You may kiss your spouse.”

Reverend Candice Schultis, of the King of Peace Metropolitan Church, was at the Pinellas courthouse and excited about the event.

“It’s a huge deal,” Reverend Schultis said. “To finally have marriage equality in Florida is a huge deal, following all the other states that’ve done it. I know a lot of members of my congregation were married in other jurisdictions already, some were waiting to get married here. It’s a huge deal.”

Florida’s attorney general Pam Bondi has long fought same-sex marriage in the state, including submitting an emergency request directly to U.S. Supreme Court Justice Clarence Thomas. Rather than decide on the request to extend a temporary ban on gay-marriages, Thomas referred the petition to the full bench – which refused the request. Then, after weeks of uncertainty about the reach of an earlier ruling, U.S. District Judge Robert Hinkle declared on New Year’s Day that civil ceremonies for same-sex couples across the state could begin Tuesday.

Attorney general Bondi issued a terse comment through her spokesperson: “The judge has ruled, and we wish these couples the best.”

Across the bay in Tampa, Hillsborough County Clerk of the Courts Pat Frank held a group ceremony at a central downtown park, where she married more than 100 couples. In her office before the ceremony, Frank said same-sex ceremonies are the legal and moral right thing to do.

“This is, to me, something that we have to do,” Frank said. “because we have to follow the Constitution of the United States. We take an oath of office to do that. And the judge has now ruled that if we don’t do it we aren’t conforming to the Constitution. I’m not about to cross lines in that area. And the more basic thin is that this is something that I felt should happen a long time ago.”

Like Frank, most Florida clerks of the court began issuing marriage licenses and performing civil ceremonies Tuesday. But in a handful of conservative counties like Duval, Pasco, Okaloosa and Santa Rosa clerks of court still won’t perform marriages for same-sex couples. While keeping to the letter of the law, they’re issuing licenses but declining to perform any wedding ceremonies at all — for either same-sex or opposite-sex couples.

One Pinellas County couple, Bob Wallis and Joe Joe Wallis, arrived at the courthouse early to get their marriage license but waited until the afternoon to be married by St. Pete mayor Rick Kriseman. Bob Wallis said justice and equality have been a long time coming.

This is a fight that’s been going on for years,” Wallis said. “And I really credit Human Rights Campaign and particularly Equality Florida, the people who have been fighting for this, and fighting tooth and nail. And the couples who were willing to sue the state. Think of what they’ve been going through all these last few years trying to get their rights, their chance to be married. They are heroes in my opinion, they are pioneers who have really taken the challenge.”

The U.S. Supreme Court has so far balked at taking up the issue. The court is scheduled to consider five new cases at its private conference on Friday. It’s not clear when the court will announce the outcome.