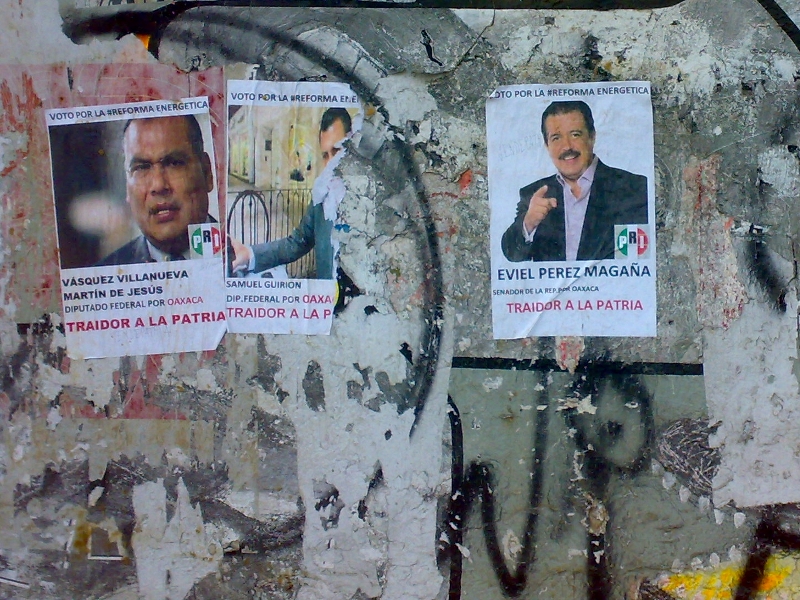 Mexico’s Congress is due to take up legislation to fine tune the details of an energy reform package that would open up the country’s energy sector to private, foreign companies for the first time in decades. The foreign press heralded the energy reform bill, but the move lacks clear public support at home. And while opening up Mexico’s oil and gas reserves to for-profit and foreign companies was in itself controversial, the U.S. has plans for Mexico’s energy sector that go far beyond what lawmakers debated in Congress. Shannon Young reports.

Download
A series of reforms introduced during President Enrique Peña Nieto’s first year in office represent the deepest structural changes to Mexico’s economic order since the implementation of the North American Free Trade Agreement 20 years ago.

The measures passed easily through Congress thanks to a legislative pact which includes the two largest political parties. While there’s no question about the reform agenda’s legislative majority, public support for it is far less apparent.

Energy reform, which opens up the national oil company and electric utility to private investment, was particularly controversial.

Mexico City based economist Ruben Trejo points out that surveys have consistently shown that majority opinion is against Energy Reform, even though the government has said it will strengthen the national oil company, lower the cost of electricity and benefit the public. “People in this country no longer believe these types of statements,” says Trejo. The economist, who recent wrote a book on the privatization of state-owned industries in Mexico since the 1980s commented to FSRN that the collective skepticism is due to past experience with unfulfilled promises. “Not one peso resulting from those privatizations has gone towards benefitting society at large.”

Trejo warns the stakes for restructuring the energy sector are particularly high since the government depends heavily on revenue from Pemex, the national oil company, to fund the federal budget.

Private energy companies, however, see a golden opportunity. Mexico’s oil and gas reserves have been off limits since they were expropriated 75 years ago.

“Congratulations. I think this reform has been a tremendous move in the right direction in Mexican energy industry,” said Ali Moshiri, head of Chevron’s exploration and production operations in Africa and Latin America, at a conference in Mexico City. Moshiri added he thinks “there is a tremendous synergy that North America – Mexico, Canada and United States – can implement to make sure the region is going to be energy sufficient not only in the next ten years, but in the future, maybe 50 to 100 years.”

The Chevron executive isn’t the only one speaking optimistically about energy integration among NAFTA member nations.

Kerry told the audience of current and former diplomats at the Council of the Americas that the Western Hemisphere “will account for two-thirds of the growth in the world’s oil supply over the next two decades.”

“So we believe in this future of energy policy for this hemisphere, of linking Canada, US, Mexico, to all the way down through Latin America. And that’s exactly the idea behind a program that we have created called Connecting the Americas 2022. This initiative is about encouraging private sector investment in renewable energy and ultimately providing cheaper, cleaner, more reliable power for citizens all across the region.”

Plans for hemispheric energy integration were first announced in 2012 at a Summit of the Americas meeting in Cartagena, Colombia. International news media focused most of their coverage of the event on a scandal involving Secret Service agents and allegations of non-payment for commercial sex services.

Carlos Ruiz Sacristán, CEO of IEnova, an energy infrastructure company owned by San Diego based Sempra Energy, compared this energy integration dynamic between NAFTA countries to manufacturing plants in Mexico which produce exports for US markets. “We’re building a wind farm along the border in Tecate which will export electricity to the United States,” Ruiz Sacristán cited as an example. “This is the new maquila. Its export is basically wind which generates electricity, and the taxes and related labor will stay in Mexico.”

So-called green energy projects aren’t the only areas opening up to private investors. Many energy companies eagerly await news about how secondary legislation will define the rules for access to extensive shale oil and gas deposits located just south of Texas.

The US and Mexico have already announced plans to expand the network of bi-national natural gas pipelines by the end of this year.

Photo: Posters wheat pasted to a wall in Oaxaca City bearing images of the state congressional representatives and a senator who voted in favor of Energy Reform brand them “traitors”