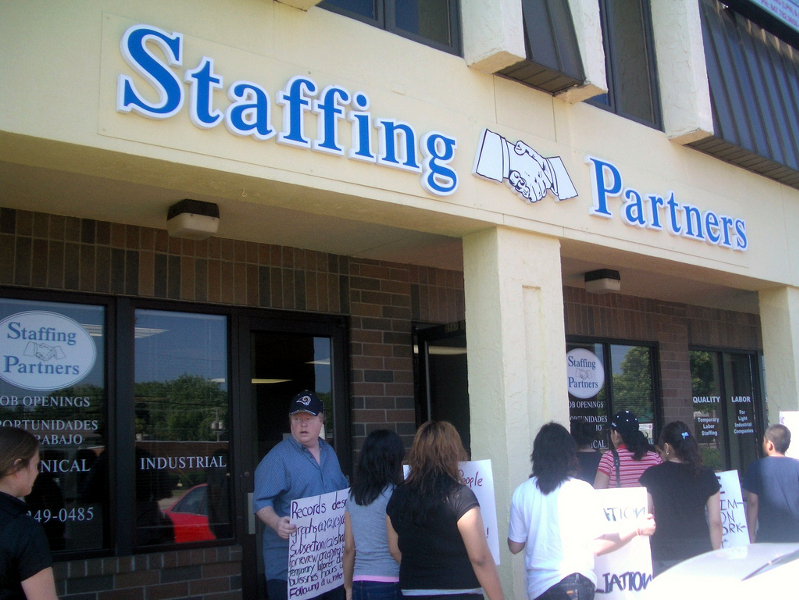 The number of workers classified as temps grew 41 percent from 2008 to 2012, according to a just released study by the National Employment Law project. What some critics call “modern day sweat shops” of disposable workers, temporary staffing agencies are not just supplying secretaries and office clerks. They’re now dominant players in many industries like fast food and janitorial services. And while the vast majority operate legally and honestly, unscrupulous firms have engaged in wage theft and other workplace violations—and because they’re technically employment middlemen, they have little accountability when problems arise.

That’s something state lawmakers are beginning to address, as FSRN’s Larry Buhl reports from Los Angeles.

Bringing in workers on an as-needed basis—through temporary staffing agency—can be a boon to many large companies. They can staff up right away, complete projects quickly, and they don’t have to pay benefits or deal with unemployment insurance when the job is done.

Critics say this model creates disposable workers who can’t defend themselves when their sub-employer violates the law, and who have little chance at becoming a permanent employee or organizing to form a union.

“From the point of view of policy these employers are trying to have it both ways, right?” asks Rebecca Smith. Smith is Deputy Director of the National Employment Law Project, which just published a report that showed 3.4 million staffing-agency jobs last year.

“That number accounts for just over two percent of total national employment. But the number has spiked in the last five years,” continued Smith. “They offload workers from their payroll but they try to and do keep a huge degree of control over the work that’s being done.”

A rise in temp workers is thought to be a leading edge of an economic recovery, and that those temps will become permanent when the economy is firing on all cylinders.  But Smith says a lot of those temp workers are in a new class many are calling Permatemps.

“You see in some industries a real transformation. Hotels is one of them,” says Smith. “But port drivers is another. After deregulation in the 1980s that job of driving from a port to a rail-head or rail-head to rail-head that used to be organized by teamsters and characterized by employee drivers who earned family wages became contracted out to independent contractors. And wages plummeted in that industry. Those jobs are benefit-less and wages are very low.”

Temp workers are no longer the so-called “Kelly Girls” who filled in while a secretary was on vacation. Now physically demanding and even dangerous jobs in many industries are staffed with independent contractors, who are paid by the middleman – the staffing agency. Sometimes there are even sub-sub contractors who take their cut but don’t have much accountability. And that leads to another problem for the workers.

“If you have a third party sitting there in the middle, then you don’t know who you’re responsible to as a worker and what are the terms of your agreement,” according to Marci Goldstein-Gelb, executive director of the Massachusetts Coalition for Occupational Safety and Health. “Things aren’t kept secret for any employee when you have a direct relationship with the employer. Why should they be kept secret for those working in the most dangerous jobs?”

The Massachusetts Coalition for Occupational Safety and Health pushed the state’s Temporary Workers Right to Know law, which was passed in 2013. She says the law was a response to severe labor abuses, such as failure to pay workers what they were owed, and not telling them what the job duties were.

“We found that there were so many different situations created by an underground economy of temp agencies,” Goldstein Gelb explains. “Some were basically placing themselves in factories owned by one of the employees so that the employer could pay this employee to pay everybody else.”

The new law requires temp agencies to provide workers with a written job order, which must include the expected start date and duration, pay rate, whether the job requires special tools, clothing, licenses or training, and whether meals or transportation will be provided. Expenses that would drop the worker’s pay below the minimum wage are prohibited.

Similar legislation passed in New Jersey and Illinois in recent years. The American Staffing Agency has fought these bills.

According to the ASA’s General Counsel Stephen Dwyer, while the organization is concerned about worker abuse, it wants to prevent what he says could be a “chilling effect on business’ use of staffing services.” He called for greater enforcement of existing laws rather than new ones.

But labor activists say existing laws don’t protect temp workers. They don’t fault the staffing industry for existing and growing, and they don’t say that temp work is necessarily a bad thing. They’re just demanding more accountability for the parent company and the staffing company, and greater protections for the workers.

And despite strong opposition from the ASA and state Chambers of Commerce, there is growing momentum to regulate the industry. In California, a bill modeled on the Massachusetts law, could be voted on by the state legislature by the end of May. The bill is applicable to all labor contractors, not just staffing firms.

The bill’s author, Assemblyman Roger Hernandez, says his bill will put the responsibility for the workers health and safety, and any wage theft or legal violations, squarely on the parent company, not the staffing agency. And he says it protects low wage and immigrant workers that usually work in these temp jobs.

There’s little enthusiasm on Capitol Hill for temp worker legislation. So for now, any protections for Permatemps, if they come, will be state by state.