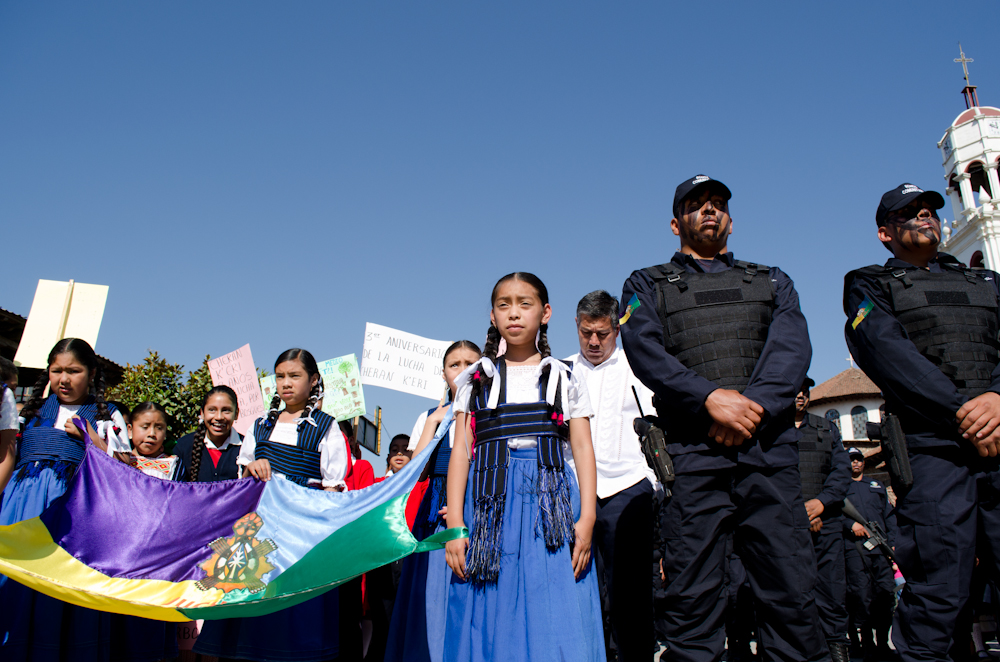 Armed self-defense efforts in the Mexican state of Michoacán have opened a debate about about what Mexican citizens can do to protect themselves against violent drug cartels in a country where arms ownership is heavily restricted. Citizen militias in the states Tierra Caliente region have attracted international media attention and led to the formation of an officially recognized “rural police” force. But in the highlands of the state’s indigenous Purhépecha region, a similar effort has already marked three years of armed, community self-defense… but under a system of traditional indigenous law-enforcement and accountability. Andalusia Knoll has more from Mexico.

For the past several years, residents of Michoacán have been living in a climate of violence where extortion, kidnapping and murder have become routine. The first town to revolt as a community against organized crime is Cherán. In the process, residents of this largely indigenous town kicked out the politicians and police they say were in cahoots with the cartels and installed a new governance system based on Purhépecha traditions.

What sparked the uprising was the illegal logging of the community’s old growth forests by criminals. “There are many aspects which allow us to think and live as human beings in a distinct manner,” says Jeronimus Lemus, an active member of the community who regularly participates in government meetings. “Our elders say ‘sesi dekani’ which means to live well which many communities mention and is essentially the other side of capitalism. Our wellbeing is not based in the accumulation of riches, it is grounded in everyday vitality.”

A branch of the new local government, the Council of the Commons, works towards the preservation of the forest and communal lands. Fresno, a council member who for safety reasons declined to give his last name, says the work entails operating three communally-owned businesses — a sawmill, a greenhouse, and a concrete block factory and also patrolling the forests to prevent illegal logging.

One of the strategies to restore security to the town is to have a volunteer-run community guard that operates as a police force and answers to the town assembly. At the start of the uprising in Cherán, regular townspeople, including elderly women, took turns standing watch at barricades, armed with little more than sticks. Now the community guard consists of young men and women with professional police weaponry.

One business owner, who gave the pseudonym Juan Carlos, believes that the autonomous government lacks transparency and hasn’t complied with many of their promises, but is glad to no longer have to pay the equivalent of 400 to 700 dollars in monthly extortion fees to criminals. “The community guard is doing the work they need to be doing,” remarked Juan Carlos. “The thing I like most about them is that they are all local people. Before it was all people from outside who were always messing with us.”

Mixtec lawyer Francisco Lopez Bárcenas says community police have always existed in traditional indigenous governance systems. “The community police are characterized by being part of the structure of the government of the indigenous peoples, the obey the community, they are chosen by the people and another characteristic I would point out is that they have legal recognition based in the constitution and various laws.”

Lopez Bárcenas points out that the sub-ordinance of community police to a town assembly provides an accountability mechanism ad-hoc non-indigenous self-defense militias lack. “A characteristic of the self defense groups is the fact that they emerged during a dangerous moment for them and the community. This is the case of Michoacán and it is also the case of many other places, Guerrero, and other places in Veracruz. They don’t obey the community, they just obey themselves.”

The indigenous “uses and customs” system requires a higher level of citizen participation than the periodic voting of the conventional electoral system. One of the ways the local council has promoted youth participation is through the community station Radio Fogata.

“We try to inform our own people about what is happening and what we think is good and express what we want in the community,” says Angelica Martinez, a young woman who helps manage the station. “Sometimes it is very difficult because sometimes they are not interested in hearing what young people think. Also, we want people to understand that young people can participate and have opinions about the uprising of our community. We help young people escape from all the vices so they can come to the radio and do something good for the community.”

In recent weeks, Mexico’s federal government has split the militias in Michoacán’s Tierra Caliente region by giving them the option to disarm and join a regulated rural police force or be considered illegally armed actors.

Many in Mexico’s self defense movement distrust the government, saying that for years officials have either been complicit or complacent with respect to organized crime.

The people of Cherán argue they have a legal right to operate their own community police force and instead of disarming will continue to construct autonomous institutions.